HMH or Heavy Metal Heart Festival has been gathering high quality concert packages in the Finnish capitol since 2006. On Friday you could even watch two of them in a row, Crucify The Faith, Reflection Dies and Fear Of Domination at Elmu Baari, afterwards TakaLaiton, Lost In Grey and Amberian Dawn in the same venue as tonight.

As I am supposed to do more sports, what better than joining this assembly of Finnish fitness gurus who make you dance? This evening wasn’t an official assignment, still i decided to take a camera with me.  Who knows, maybe I get some snapshots and decide to write a few lines about this gig… (Interactive photo gallery below).

When Winterthroned delivered their appealing Folk Metal, the hall was pretty loaded with people already, and the people, well, most of them pretty much too.  Moreover, the band endorsed an alcoholic beverage I would not want to mention in more detail here… Well, some people doubt it is consumable, and my first reaction to it was the same I had to strawberry-salmiakki ice cream: Once you overcome the retch-reflex, it is actually not that bad… Then I got reminded of physics and the laws of inertia, getting rammed into a table… Well, good that I was off duty and had more freedom to decide being near the stage photographing, or not… Another lesson: as soon as a band mentions “Mosh Pit” – run to safety …

Brymir continued the energy and high spirits of the Winterthroned show, delivering a tight best of set that hardly gave time to audience to relax too much. Singer Viktor also proved his capability for clean vocals once again – which he could actually do more often. When talking about spirits, Brymir too celebrated a beverage, the one containing hop… This time I made it to safety before the Mosh Pit frenzy started. Great set, I gladly joined into the “who can scream louder” competition.

Apropos screams, guess what happened when this evening’s headliners entered the stage at 1:15h …  Korpiklaani can always guarantee a good time – great songs, a great performance and a likeable energetic front man. The hall was boiling over in no time. No matter whether Speed-Metallic dance tunes or some more grooving Folk Metal hits, those guys simply rock. I personally enjoy Jonne Järvelä’s vocals best when he includes some joiks. The audience – well, all those who could still stand upright – gladly joined the dance frenzy and naturally wanted some encores. Which they got, again dedicated to a certain beverage… great gig, Korpiklaani are always fun! 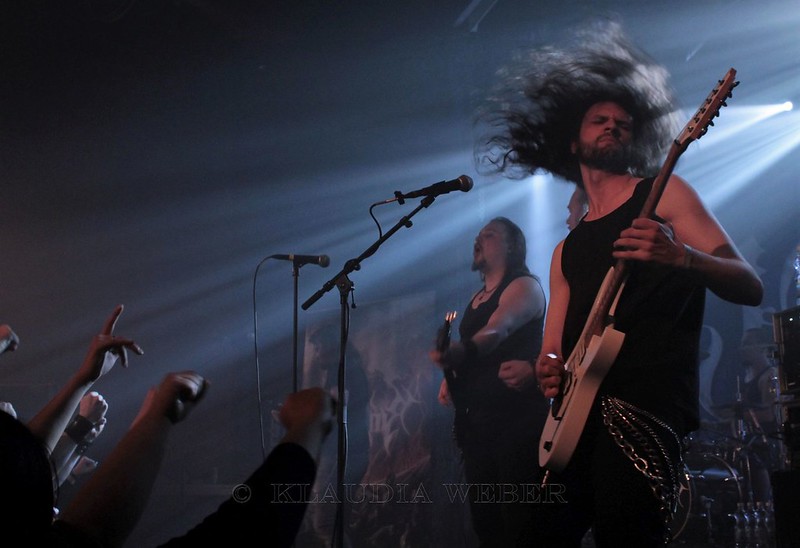