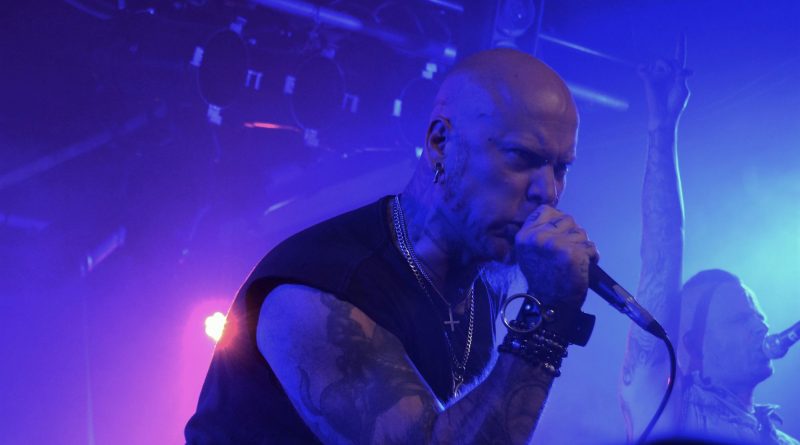 Absurdly it was the huge demand concerning the official (sold out) band funeral on Saturday that I also got a chance to see them live for a last time, as another gig was arranged on Friday, featuring Demilich and Gloria Morti as guest undertakers. Have not been in Jyväskylä or Lutakko for a while, and I had preferred a more cheerful reason than burying the god of war (Sotajumala) …

There was not much time between doors open and first act of this evening, thus I wondered about the rather small crowd when Gloria Morti entered the stage. But right after shooting some pics, turning around –  WOOM – where did all those people come from in a sudden? Needles to say that the band’s mix of Epic Melodic and Old School Death Metal soon inspired mosh pits (luckily after I had taken photos). Besides classic dance tunes like Executioner the set contained musical tributes to the horror version of Austrian family life. Although I can understand how “imprisoning your own daughter in the cellar and having half a dozen kids with her” can inspire a Death Metal album theme, I think that naming that perverted asshole in a songtitle is way too much of reverence …

Demilich from Kuopio was a band to closely listen to – a highly technical mix of Death/Grind that somehow reminded me of VoiVod, featuring inhuman growls and lyrical themes that seem to be taken from, err, the medical world, as deliciously delivered as Pungent Stench had done it back then. The audience seemed to be as focused as the musicians on stage, and a bit reserved, but soon the pit filled up and there even were some slam dancing going on towards the end of the set.

Sotajumala naturally could not do anything wrong on this evening, which should not mean that they did, on the contrary, everything appeared to run smoothly. Thanks to a dedicated audience and the absence of a photo pit I did indeed feel in a war zone… good that I had brought a zoom lense … What to say about the second-last gig of this band, nothing like tears and tranquillity. Moreover, those “life-affirming” lyrics or “positive” songs of this band fit to the occasion like a glove. Band and audience as well celebrated vicious acts of debauchery during an excessive show, where singer Mynni occasionally appeared like a god-of-war-incarnate, surrounded by a highly engergized crew. I asked myself how on earth could they muster so much strength again for the show the following day – and I heard this one was at least as awesome as the Friday “funeral rehearsal”. A worthy final retirement. RIP Sotajumala!