No idea how often I had tried in the past to visit this legendary Metal festival in the heart of Finland (near Seinäjoki). Just never happened – either I had to work during Juhannus or other duties kept me from travelling… this year it finally worked out and with my ”partner-in-crime” a car was rented (a hybrid that had slight difficulties on dirt roads) and we already arrived on Wednesday (when cover bands dominated the program), so that we can set up a camp, check out the area and have a relaxed Thursday to start our work as media at the festival.
Why this plan did not work out, you can find out HERE…

Which still does not change the fact that Nummirock is definitely one of the best Metal festivals in one of the most  amazing locations which Finland has to offer. The area has a nice size easy to survey, there’s a sandy beach right next to the stages, so theoretically you can splash around a bit and still watch some bands playing (practically I found the water a bit too cold).
Or just look here – this is the Inferno stage

and when you turn around 180 degrees, you see this:

Camping is possible right next to the festival area, either near another beach or in the woods, and we chose the latter. Under a hot summer sun (like on Sunday) this is actually the better solution having some shade and trees around you.
And all those tent saunas everywhere (one at the festival beach which can be rented) – although familiar with Finnish Sauna culture, this left me open-mouthed…( HERE some photos)

On Wednesday we had a chance to get a sneak peak into the festival organisation, we talked with several volunteers making Nummirock possible. Staff, musicians, media – they all mingle and work together, which creates this ”big family” feeling and a relaxed atmosphere. Apropos family, it seems there are indeed families as a whole involved in the organisation process, kids have fun picking up cans and bottles in the area … There’s plenty of catering and chill out areas – at one stand you can even get your hair done. I have never seen so many sofas at a festival (and in the camping ground). Sanitary conditions are fine and well taken care of daily.

Thursday, 23.6.2016:
Somebody had described Nummirock as ”mid summer celebration with some bands as a bonus” to me. And well, several people act like that, focus on chilling grilling and party and occasionally drop by to watch a band. And do the math, 4 stages, one person – even beforehand I decided that I rather enjoy the festival atmosphere than run from stage to stage all the time…
Therefore I only missed two bands on day 1, Gloria Morti and Turmion Kätilöt and at least I was present at the final gig in the career of Altaria . Yet my energy was just enough to take photos of Stratovarius who once again impressed with a good show. Well, have they ever delivered a bad show? And what could possibly go wrong with great songs like ”Hunting High and Low”? 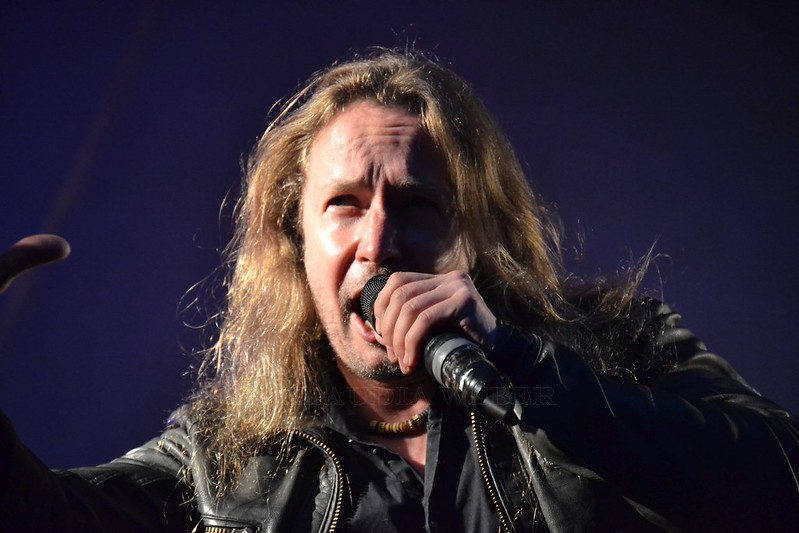 Wolfheart was a band not to miss, and they definitely saved my day. I managed to stay to watch the full set despite waning powers… and it was worth it, the mighty ”Routa II” in the end with all this fire show – simply breathtaking! 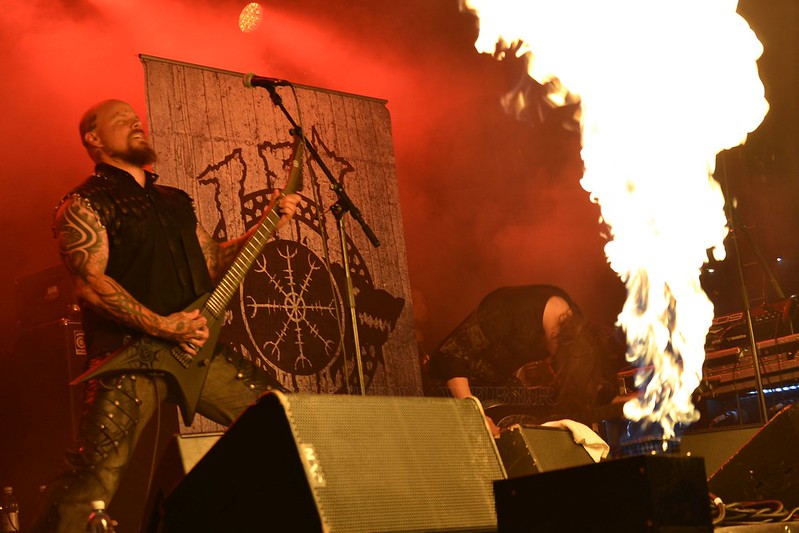 Friday 24.6.2016
Side effects of the previous day and the fact I could not really get any sleep due to all those parties around our camp – and this day turned out to be really hot – luckily did not change my plans too much. We just listened to Diablo while grilling, but Amorphis was a must-see. Another act with seasoned performers who delivered once again an inspiring show. An online satire program showed Tomi Joutsen using a toaster as microphone – was this the basic design idea for his new gear? 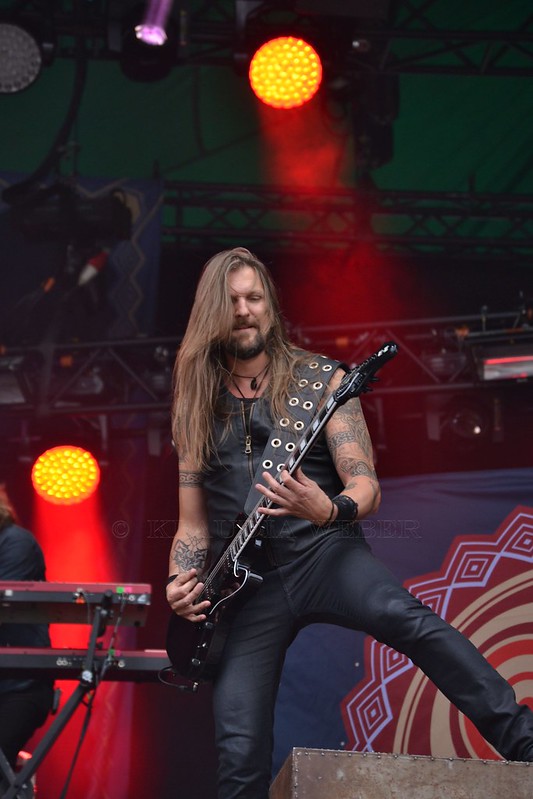 In between I checked out Celesty for a while because they were so goofy at their soundcheck I wanted to know what they really sound like. And well, if you like Sonata Arctica & Co you will like them too. 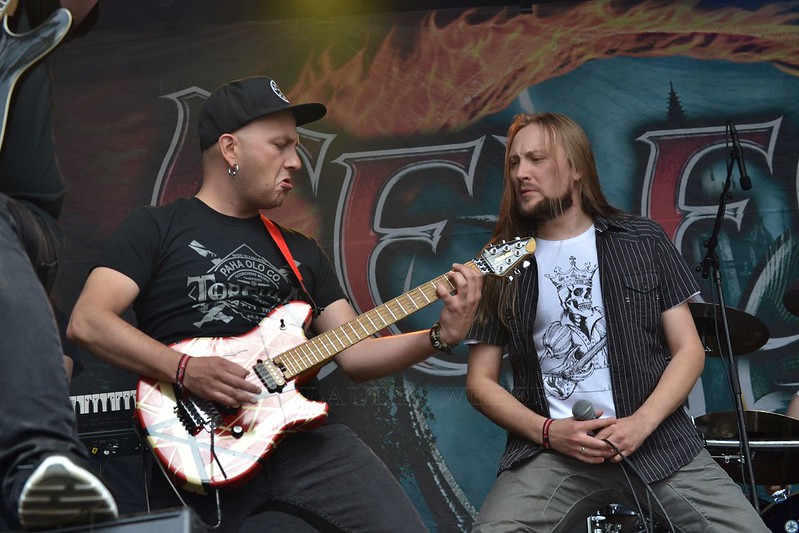 Dragonforce are always fun – all those antics on stage… and you simply get pulled into it even when you are no die-hard-fan. I was a bit disappointed that keyboarder Vadim looked pretty normal here, at least in comparison of his outfit back then at Ankkarock … 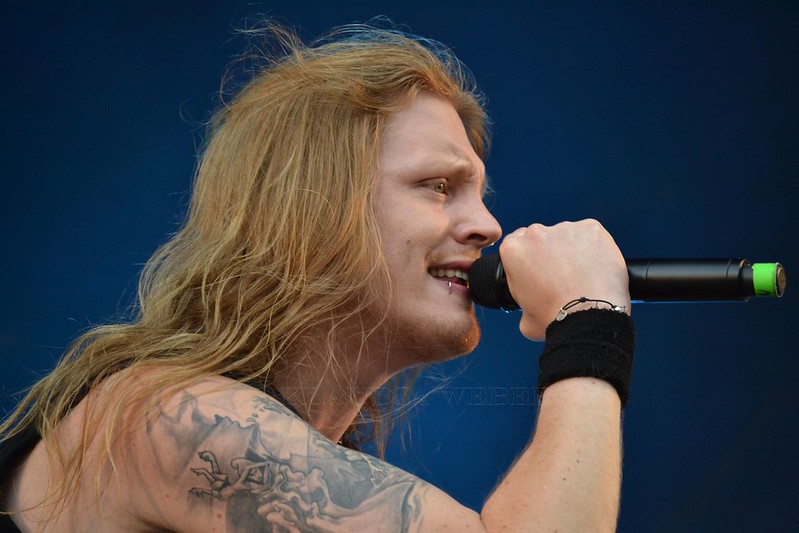 Dark Tranquility drew a huge crowd and became my highlight of this day. Singer Mikael simply has this likeable aura, and all those guys project all the fun they have on stage on to the audience. The program contained new and very old stuff from the Spinefarm era. Both thumbs up! 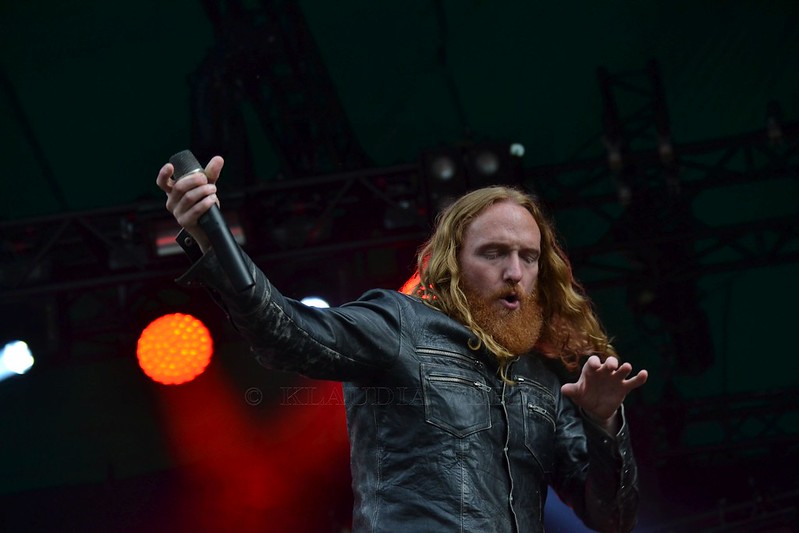 The following two headliners were not quite my cup of tea therefore I cannot say much. Pretty evil stuff from Marduk … 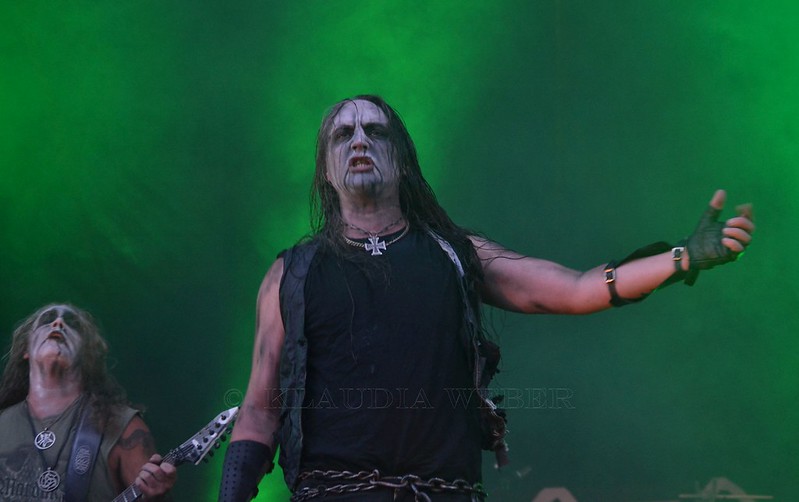 … and then Mayhem who delivered a highly dramatic show, which was difficult to capture due to all this fog. Hellhammer on drums remained completely invisible. 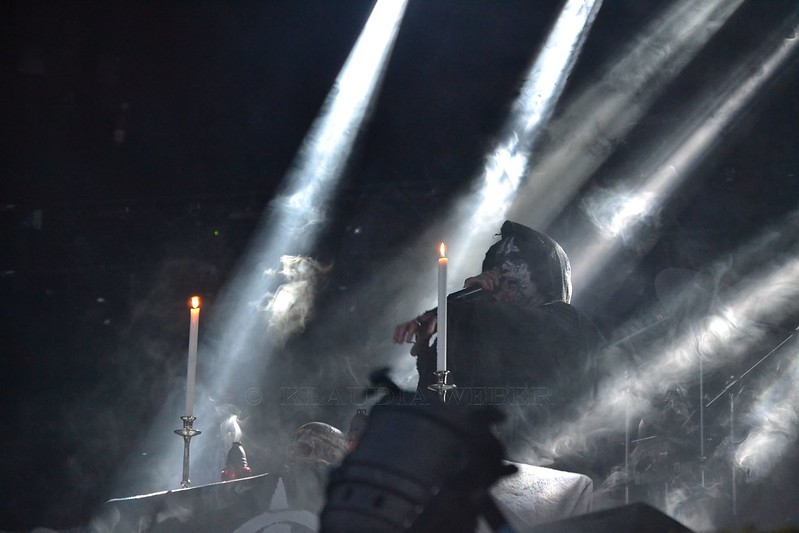 I preferred to wait for the resurrected Ajattara, who played an intense gig as if this hiatus has never happened. And the old songs still sound as inspiring as back then. But next time I take a rain coat to the photo pit as they use real blood… 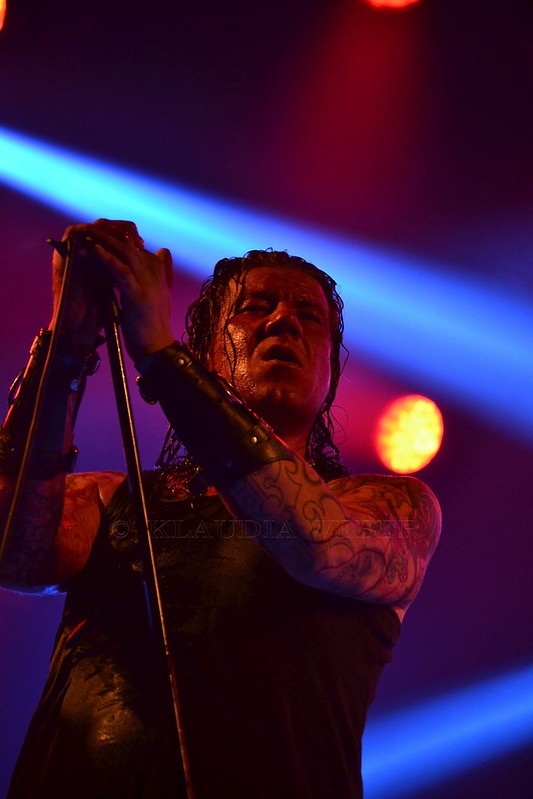 Saturday 25.6.2016
Finally on day 3 I experienced a true festival feeling – perfect weather, a bit cloudy hence not too hot, and I felt a bit more relaxed and back to my normal self to fully enjoy my surrounding. Later I even had my first – and only – beer at this festival when enjoying the bluesy Hard Rock of Peer Günt. Singer Timo Nikki sounds a lot like Lemmy… and maybe I should mention that several of the cover bands playing in the beer tent could have been clones of the originals.
This day was dominated by Finnish phenomena, beginning with the veterans Rotten Sound where fans introduced a new moshing style, done with huge ice hockey gloves and sort-of-waving them. 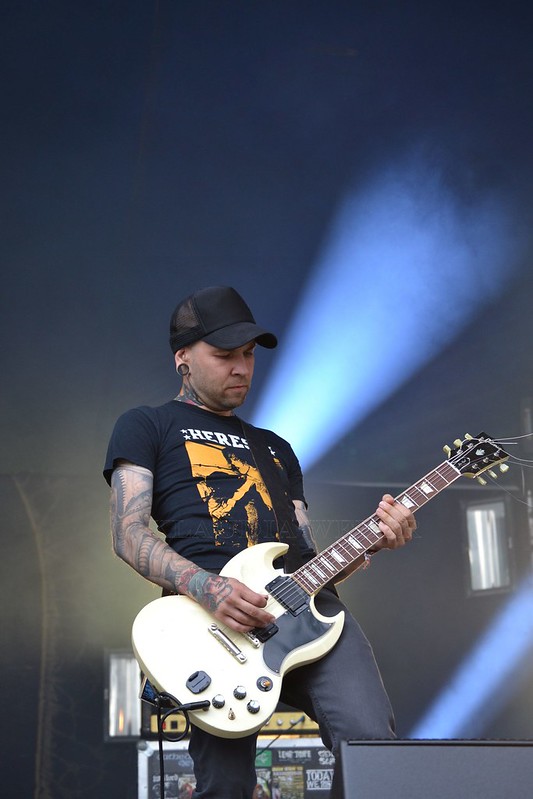 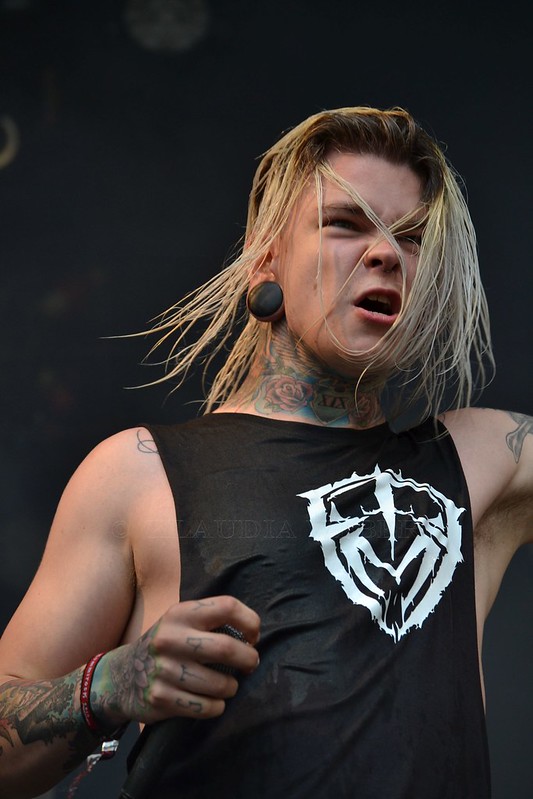 The toughest mosh pit of the day – the whole festival – could be seen when Martti Servo & Napander hit the stage. He plays Pop, Tango, Schlager … and then you see people in Corpse paint dancing – inconceivable!

Alfahanne scared me a bit – or at least the fiery entrance of their drummer. This Swedish Goth-n-Roll was the perfect background music for chilling out at the beach nearby. 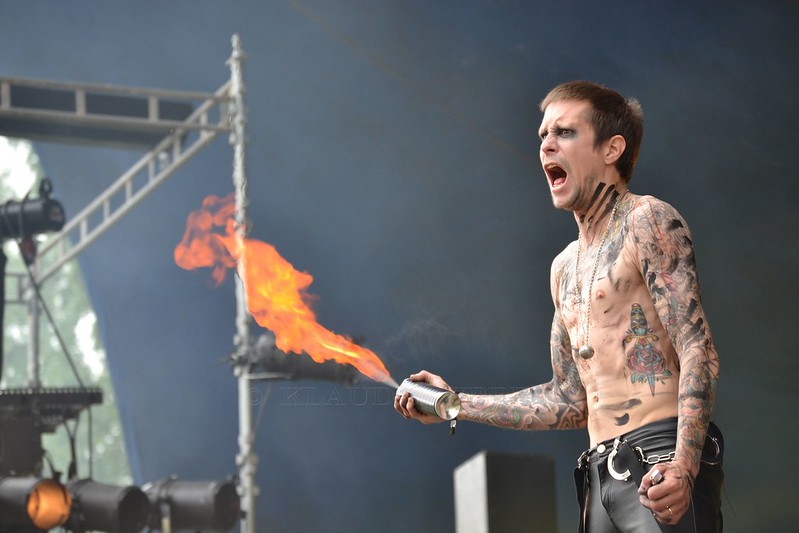 Mentioning Finnish phenomena – Stam1na – where the audience went at least Martti-Servo-nuts – and Mokoma are definitely part of it. The downside, if you don’t really understand the lyrics you have difficulties to figure out their appeal to people. 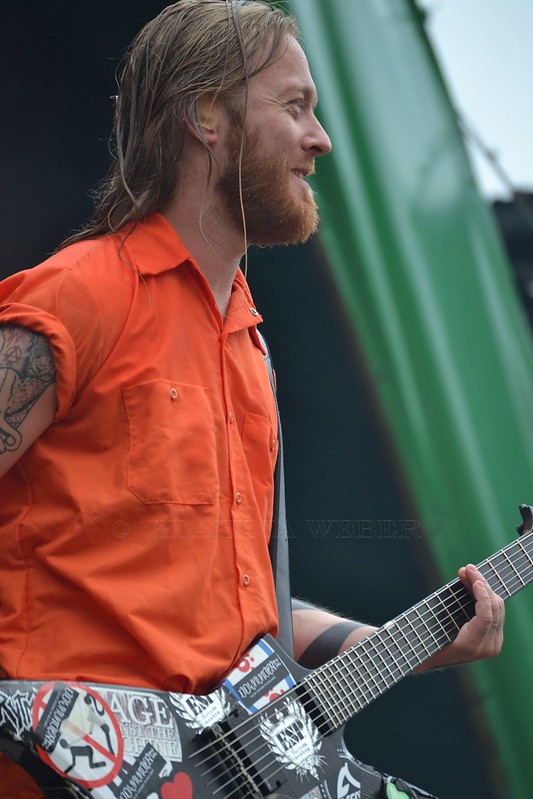 Many more people arrived around later afternoon, and I suspected that Trivium have something to do with that. No wonder, their crazy show is entertaining and they also have a lot of pretty catchy songs. 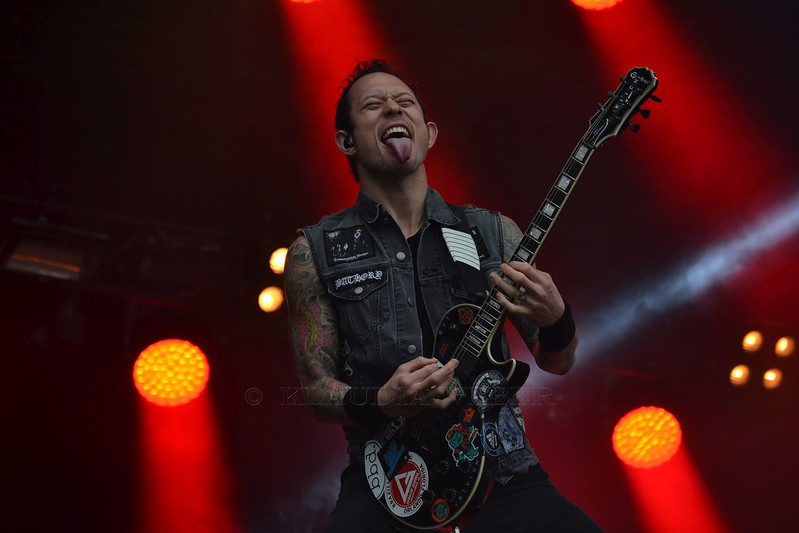 When it was time for Children Of Bodom the main area was completely full – and the rest of the festival area deserted, it seemed everyone who could still stand upright was there to watch the show. And indeed it was worth it, those guys always deliver, and beside a firework of great songs (incl my fave ”Hate Me”) they also fired off a real one. 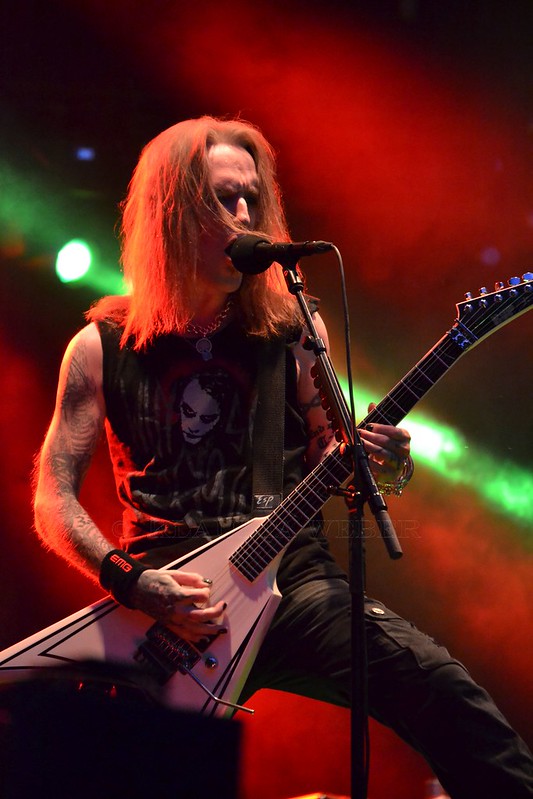 Fantastic finale of a great festival, which was indeed an unforgettable experience – the blood moon, the campfires, the mist among the trees in the early morning hours, those sauna tents – and less mosquito attacks than expected, luckily. And the impression to understand Finns a little bit better. And maybe still some drops of blood from the Ajattara show that were overlooked.
Yes, thank you, I surely wanna come back to Nummirock!