As a starter, the Lübeck formation Enlaced By Tempest entered the podium. They were only a few hours earlier invited as a substitute for a band which failed because of illness. Difficult, nobody did know about them and generally the guests still enjoyed chatting while drinking outside ice-cold winter beer. The band seemed to be surprised by themselves because of all the spontaneity, so the singer repeatedly tangled in his microphone cable, but this did not detract the good humor and the fun with which they ironed their metal in the hall.

Not before the following and expected Burning Age from Hamburg a group of celebrating fans came closer to the stage. Stylistically, the band tied almost seamlessly from the previous group – brutal riffs, hardness and roaring growls were non-stop filled in the ears. Burning Age expressed their pleasure to rock on the “Infection Festival” for the first time the not quite small Knust. The enthusiasm, however, was also reflected in their playing time – they found virtually no end. When two more songs were announced, suddenly even the group of hardcore banger left in front of the stage to replace the expended liquid level anywhere else. 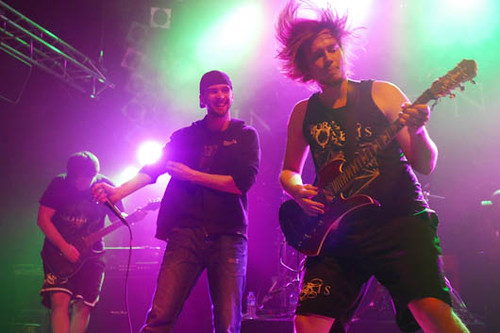 The conversion to the Infection-concert was quite exciting – rarely or never before the big red curtain was drawn in front of the stage. Behind it for 20 minutes the band evacuated and rehearsed, then the lights went out and a theatrical sound announced, the show could go on.

The Wilhelmsburg band Infection is still not (yet) very well know to the Hamburg scene of local heroes, but they can base on an accumulated over the years amount of fans. This made them so brave to launch a comeback in the Knust. Comeback means: almost meanwhile dissolving, last year twice loss of two bass players, they can not be intimidated and press on the pedal, for what the red curtain opened ostentatiously: Hello, folks, we are Infection!

The new bassist Rikku was presented on the occasion. Singer Tümay remains on his enthusiasm to stand on stage and infect the audience with his energy. As the driving engine of the whole behind, drummer Emal let his sticks swirl and guitarist Juled concentrated and as usual with an almost entirely straight face and tensed muscles blew his massive riffs and chords strings to the people.

Infection definitely have potential and talent, although one could wish, the repertoire would grow richer in the near future. Because the request for an encore they had to grab into the box with a pre-played song after all. New songs are absolutely necessary for the musical development not to stick to the old inventory of the past years and to discover new horizons.

But now again fully staffed and letting the turmoil of the recent years behind, hopefully one could ask that the viral delirium of gothic-influenced Rock`n´Metal can develop the outbreak of further infectious creations. Let´s see what will happen.

AHAB: Dull Ice Sphinx and jitter at the customs