For the 11th time a monster show takes place at Z7 in Pratteln. The Lordi monsters return to Switzerland after a long hiatus. As it´s also carneval time and the weekend of Valentines day, where many got to join a trip with their loved ones, the audience is not that huge, maybe 350 – 400 people, many young people and also kids who enjoy their school holidays.

This year the Finns travel with 2 opening acts, the Italians Sinheresy make the start with their Symphonic Metal. From my perspective another band that does not really fit to Lordi, and once again I wonder WHY? But maybe they paid enough for this tour slot. The overall impression: musically a bit one-dimensional and therefore they do not succeed to inspire the crowd. This thin voice of Cecilia is drowned by colleague Stefano, and the songs are not quite memorable material, therefore some seem to be not too unhappy when the band leaves the stage again. http://www.sinheresy.com/

After a real long chageover – you begin to wonder what on earth they are doing – Palace. finally start their gig. The second band fits Lordi better, musically, but for some reason also here the audience is not reacting too enthusiastically. The Germans around singer HP play Heavy Metal, which is not bad at all but somehow drags on after a while. When they announce the last song, you can hear some people holler „Yeah“. http://www.palace-music.de/ 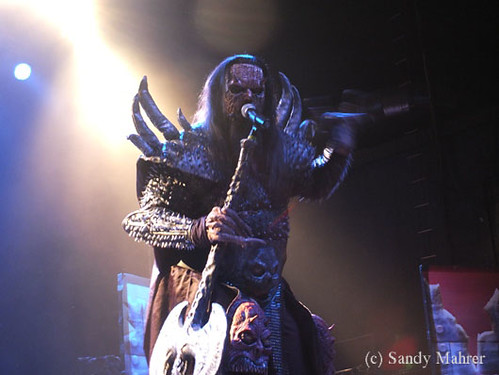 Lordi only need a short time to be ready for the show, which is introduced by an airplane captain announcing to his passengers that the plane is going to crash. The program tonight is dominated by songs from the new album „Scare Force One“, but also some of the old hits are played and once in a while also material from B-sides – „Don’t let my mother know“. Besides the numerous special effects, for example snowflakes from the hall ceiling during „ It Snows in Hell“ and pyros, the individual musicians also get their chance to shine. Hella bewitches a baby in the pram, which drags a female into the pram and later chases another one across the stage. Mana has a skull float and OX receives a nice guitar pedal, a chained and tortured man who also gets his guts pulled out. There are dancing Clowns and confetti, a tiny crazy devil, a granny who attacks the audience, or a headbanger who looks like a mix of Twisted Sister and Kiss Metaller, or those two background singers who are part of the new show. I particularily liked the part of mummy Amen, who stood suddenly in the center of two huge flaming columns, playing a solo there, it just looked awesome. There is something happening all the time, although you sometimes notice the struggle with the costumes. Just imagine how hot it must be inside of them, and then also the extra weight – well, not everybody could pull it off that professionally! Once again Lordi inspire the crowd and give it all – and finally Mr. Lordi receives a birthday serenade and one, two shots. The Finns say farewell with a cover version of Kiss´ „ God of Thunder“, in order to celebrate Mr. Lordi´s b-day backstage. For this fantastic show a 10/10!
www.lordi.fi 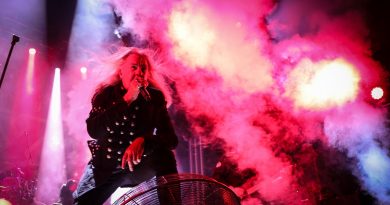 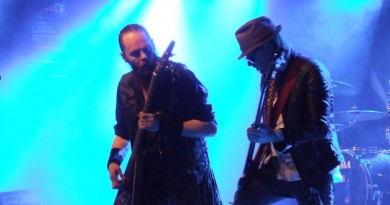