Once again a Saturday when you wished to be able to clone yourself (as e.g. also the Swedish STALKER Fresh Act Heavy Tiger played that night, as support of Los Bastardos Finlandeses). Yet no competition for Findustry events, and this evening offered besides the excellent line up also the record release show of Cold Cold Ground.
When I arrived, Älymystö just began to weave their web of sinister-melancholic tunes.

Rather a happening than a usual gig – at least singer Mr. Vuorensola (also known as director of Iron Sky) gave this impression when performing those Finnish and English lyrics sitting on a bar stool. The sound of this act can be described as more atmosphere than conventional song structures, and tuned so low and gloomy that even funeral music seemed cheerful in comparison. Or imagine a Marilyn Manson vinyl single played in LP mode. The rather unusual instruments – e.g. Mr. Honkonen playing a Theremin, which I have seen live on a stage for the first time ever) added a special element to this poetry from the darkest pits of human existance (one of the topics was for example Kivun Jumala – god of pain). When towards the end more melody and song structures were added, Mr. Vuorensola turned out to be a quite passionate front- and show man. www.alymysto.com

Punctually to the second act, the club had filled up nicely – Iiwanajulma seem to have quite a cult following here that even travels from far; singer Wille welcomed people from e.g. Savonlinna and even Estonia. Before the show the new video ”Passiivisesta Väkivallasta” was screened, also the title of the most recent single release, which unfortunately could not be purchased at the show as planned – and the fault lies with a copying factory in Sweden … The band did not get affected too much by their frustration about this fuckup, and also no sign of passivity on stage – on the contrary. This intense show plus those brutal riffs once again electrified the audience. Great gig, one of the bands you just have to see. www.facebook.com/iiwanajulma

When the headliners Cold Cold Ground began their live presentation of the new CD ”Lies About Ourselves”, the party was in full swing. Good for the band, bad for the photographers… The new album material gives the impression that musically the band explores the calmer and rather melancholic aspects of their music – the lyrics however will remain sarcasm clad in the blackest of humours, commenting on the human condition. Some of the new tracks had already been part of a CCG Live set gewesen (e.g. the catchy track Tourist), therefore the crowd could not only sing along with the classics like DYIM – one of my faves – but also contribute voice volume to the new ones. Guests on stage were also some of the performers who appear in the latest video ”Welcome to Hell” – check it on the band website www.coldcoldground.com. Definitely a well done presentation, thanks Findustry!
More photos in the gallery, link in the top section!

Setlist:
We Are the Sun
My Fist and I
Pigs
Tourist
Cocaine In My Ass
Drive
DIYM
Lies About Ourselves
Suck and Pay
Model Citizen
Welcome to Hell
Things Fall Apart 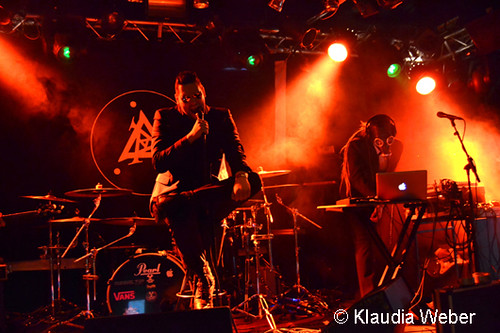 Max Jason Mai: “I don´t like to be limited”