The drive from Helsinki to Nummirock was long. Sandwiched between two other people in the back of a small car, I frequently asked myself why I was making the long summer trip to this festival. The weekend answered that question in such a way, that I´m already looking forward to returning again next year. Nummirock is not just about the bands, it´s a whole festival environment spread out over Midsummer weekend in the middle of nowhere Finland.
(interactive photo gallery at the end of the text)
Cars had been arriving for days, but many people planned their arrival to coincide with the first bands on Thursday night. My own shared transport limped into the camping grounds with a few minutes to gather my camera and catch

Pain Confessor
on the Koff Live stage. Perfectly situated next to an adjoining bar, this smallest Nummirock stage allowed you to get up close and personal with the bands, with your beer in hand. It was the only stage open on Thursday night, and was headlined by Battle Beast.

Singer Noora Louhimo drove the crowd into a frenzy as the first night of Nummirock crashed into full consciousness. Even the underage crowd, locked just outside the stage area, were getting into the spirit. As the crowd flooded from the festival grounds, to the campsites, it became apparent that sleep was on no-one´s agenda. Barbecues were lit, drinks opened, and stereo systems turned out. Throughout the well lit Finnish summer night, festival goers celebrated, socialised and even sang a little karaoke at one particularly well-equipped campsite.

The night quieted into a sleepy morning about 8am. Some people braved the ice-cold showers, while others slept off the excesses of the night before. With the first band not due onstage until 13:00, most people used the quiet heat of the first half of the day to sleep, recover and prepare themselves for the first full festival day. I listened to Edge of Haze from the coffee vendors in the campsite, but first wandered into the festival grounds much later to see the energetic folk group
Eläkeläiset.

There aren´t many bands who fire their crowd up into long congo chains and swing dancing, but their set was probably the most fun I saw all weekend. A good way to wake up (besides my growing habit of energy drinks).
The next band to grab my attention was Ghost Brigade. With a dedicated fan-base, these atmospheric doomers had their crowd at the Inferno stage absorbed in their music. Those voting to continue drinking watched pensively from the nearby bar area.

As the day wound into evening, some people sought food, and others sought drinks. The campsite was busy all day, and the crowds moved between Mokoma, the Shining and whether or not to swim, sauna or barbeque first. Towards the ripeness of the endless summer evening, the vikings of Amon Amarth threw their energy into the thickening crowds. Those who had spent the day lying about camp, or by the lake, had entered the festival grounds to join the rest.

Behexen filled the Koff live stage with their bloodied black rituals in the bright evening sun. Ensiferum invigorated the crowd of the Inferno stage into a battle-ready mob, with many painted faces, kilts and furs of their dedicated fans amongst the crowd. Fired up for midnight, Midsummer was greeted by Wintersun on the Main stage.

Their epic metal symphonies echoed out over the crowd, with the most fanatic pressing themselves closer to the stage in front, and the more relaxed nodding along from the tree-line. Closing out second day, Omnium Gatherum filled the Koff stage with their melodic death for those dedicated to drawing every last music moment from their evenings.

As the day before, the camp did not sleep. Parties wandered around the campsites, new friends were made and drinks raised to the day that had been. The third day would start even later, at 14:00, so many could still be found sleepless well into Sunday. This worked well for me, as the line for a cold-shower wake-up was short and the coffee was plentiful and hot. Trips were made to the local store, phone batteries recharged, and the brief cold of the night seeped out to greet people sleeping in the bright of the day outside their tents, sprawled on the grass like lawn ornaments.

Some made it to see the first band, many more poured past to see Nicole open the Inferno stage for the day, and several more for Kalmah on the main stage. The most involved stage show of the festival was brought by Hämeenlinna rockers, Dirge Eternal with their zombie nurses and an exorcism.

Insomnium broke into the early evening with their gripping melodies from the Main stage, filling up the festival area early for the last night.
Bloodred Hourglass, Chelsea Grin and Soilwork grabbed their fans over the next few hours as people drank, partied and danced their way towards Midsummer night. Closing out the Koff live stage for the festival were Mors Principium Est. A full crowd of people singing along and raising their drinks to the light of Midsummer. Soon afterwards the Free Jam stage near the Inferno saw it´s last action for the festival, with some smaller bands taking the opportunity to crank out a few covers.

To show that there was still energy left in these festival goers yet, Rytmihäirio spun the crowd at the Inferno stage into a wild drunken brawl of moshing. Drinks were raised from the nearby bar, as the cult following of the alcohol fueled metallers showed themselves in full force. Closing out the festival were Children of Bodom.

Covering old and new favourites, the guys from Espoo showed why they have achieved their level of success and their legions of loyal fans. One dedicated American fan had planted herself at the barrier much earlier in the day, determined to get the best spot for the show. I could not find her afterwards, but I think she got the concert she was hoping for. I finished out the last few songs of Bodom having a drink and watching from the Koff live bar with several others, and planning my trip to Nummirock again next year.

And no. The camp did not sleep again. This is Nummirock. It is not just about the bands, but the camping, the socialising, the endless sunlight of a Finnish midsummer and the experience of a festival far from civilisation.

RATING: 9.5/10 (half point removed for: half the ladies toilets being out of order by Friday) 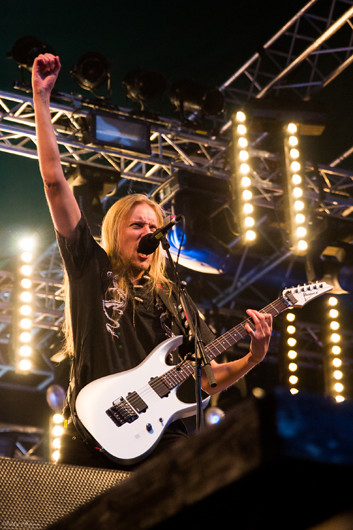 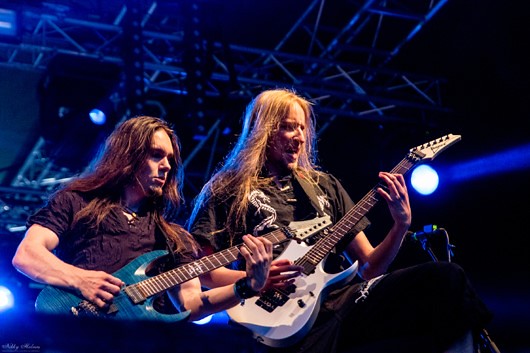 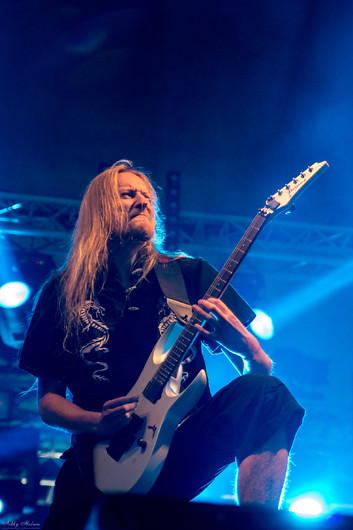 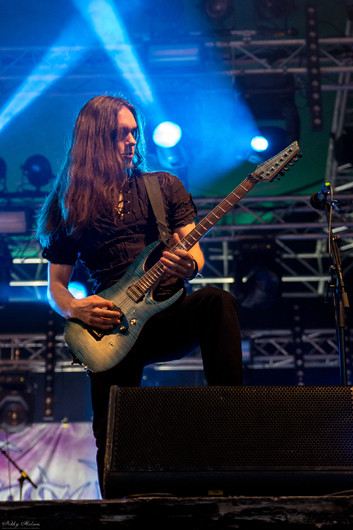 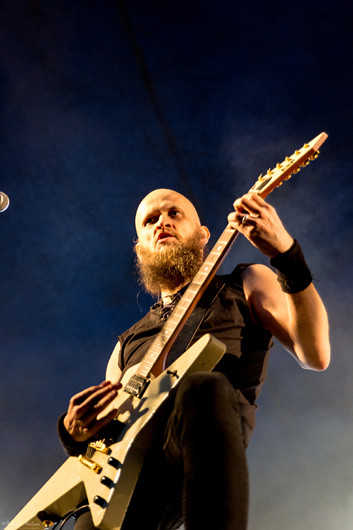 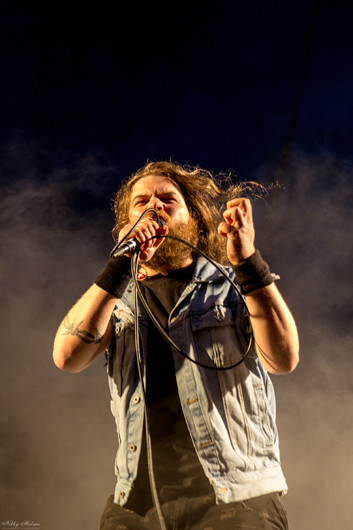 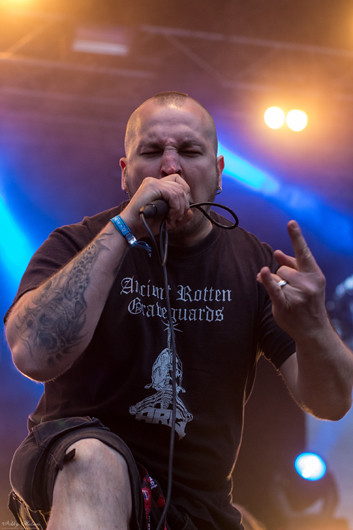 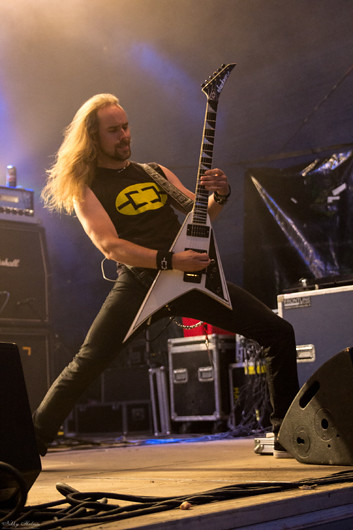 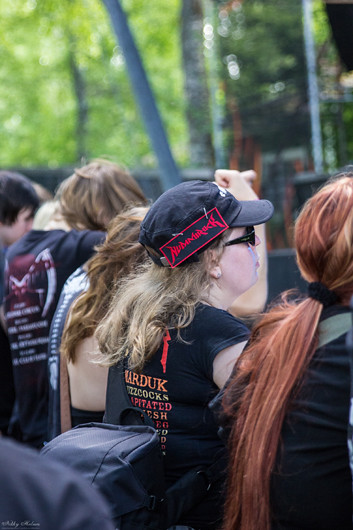 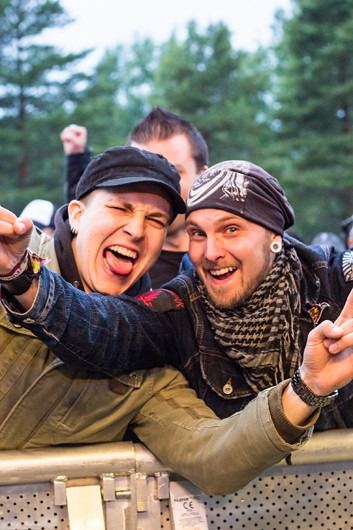 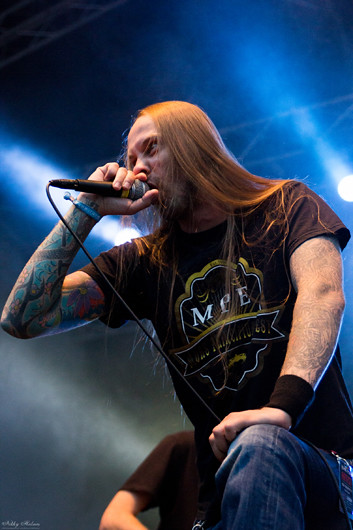 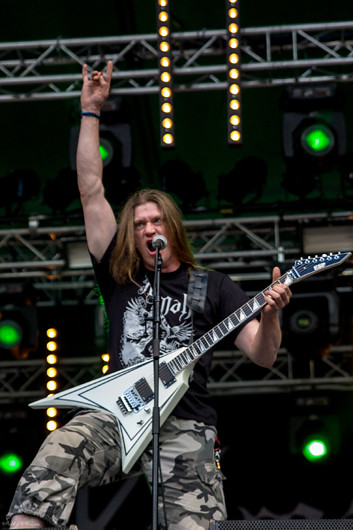 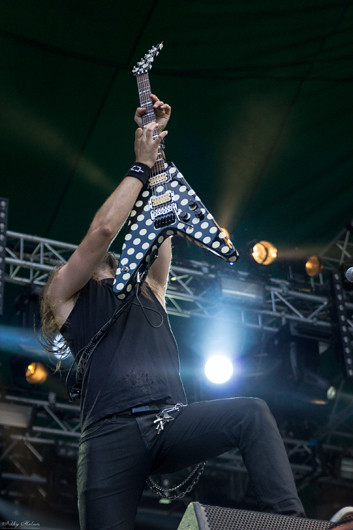 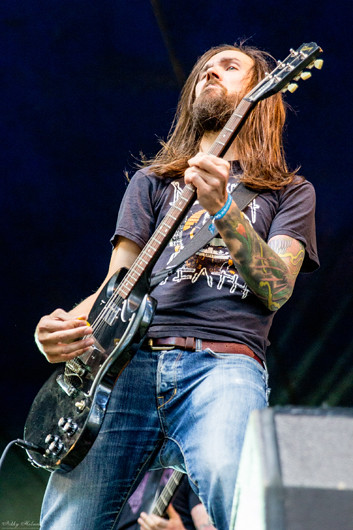 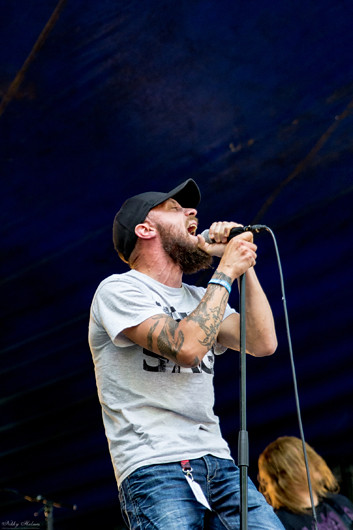 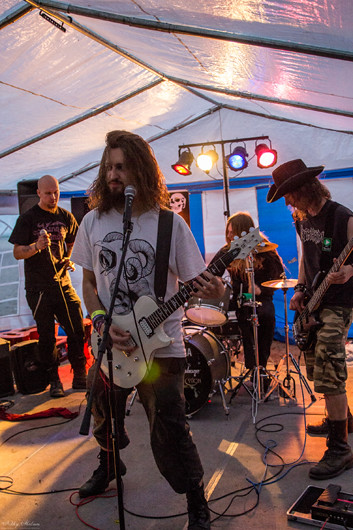 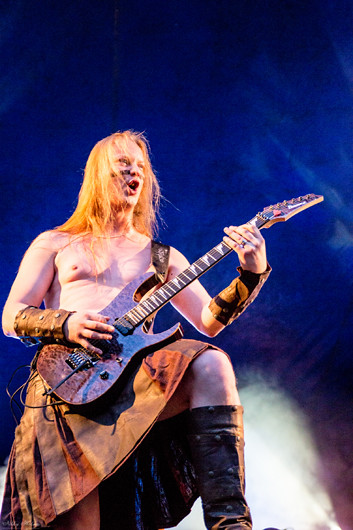 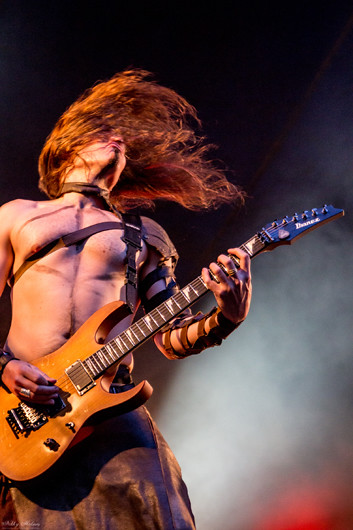 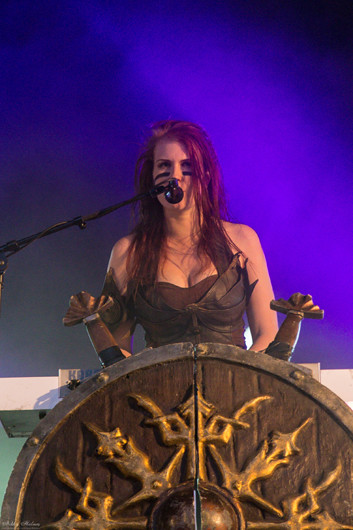 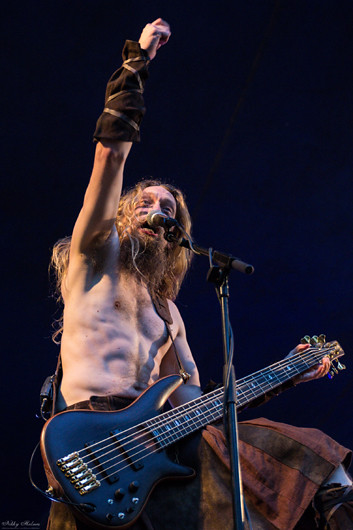 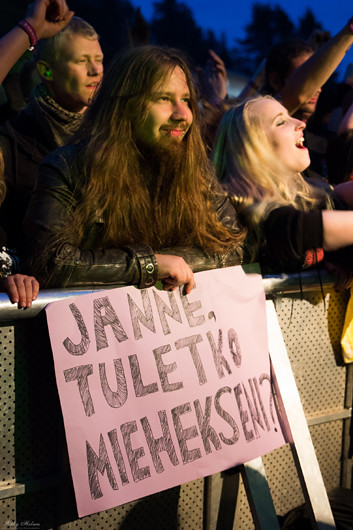 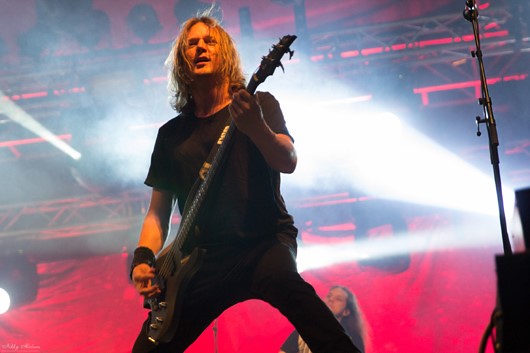 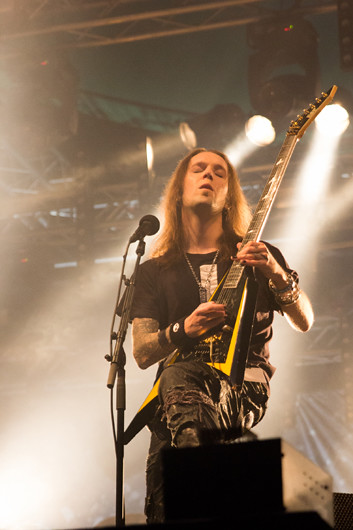 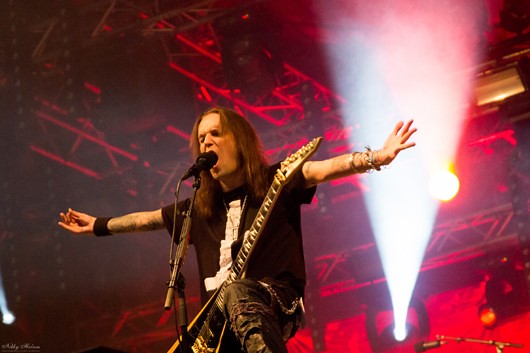 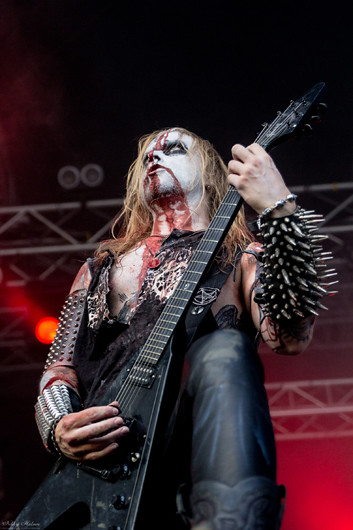 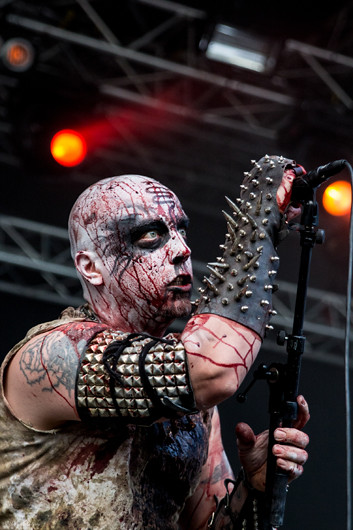 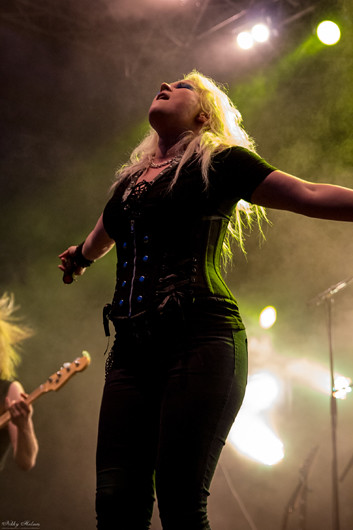 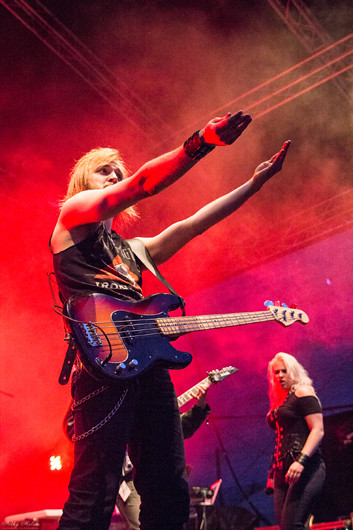 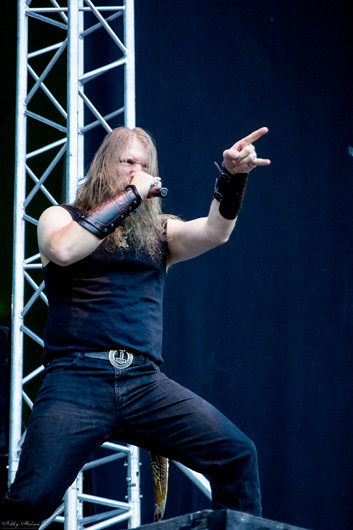 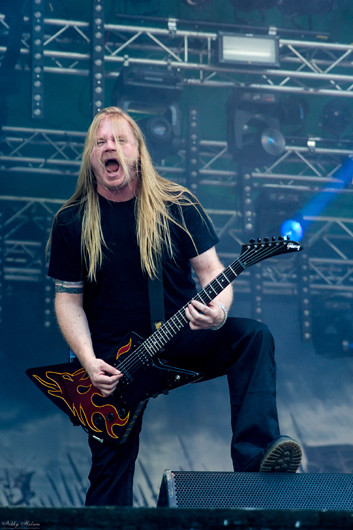 nikky@stalker-magazine.rocks - reports, photos - - - Nikky is a second-generation shutterbug from Australia living in Helsinki, and is one of the Editors of the online English-language Finnish music magazine, Hel Rocks. She started in published media with art & culture zines in 2002, but turned her hand to writing about metal music in 2012 for Metal as Fvck in Australia. Nikky prefers Black and Doom metal with good melody lines, and is partial to a bit of Blues.

Inkubus Sukkubus: Music from Another World