Findustry events is something not to miss for STALKER because of this peculiar mixture of dance party and concert, well-known and not so well-known bands and Djs, with a focus on genres that mix with Elektro/Industrial, has always some surprises to offer. This time it was a way too nice weather that appeared the doom of this 2-day-event (May 31 and June 1) …

… because when on day 1, after Djs Kryotechnik and Emanon, the first band DIABLERIE entered the stage, there were much less people in front of it than on the bar´s outside terrace. Those people missed a cool mix of Death Metal and Industrial, something like Rammstein meets Entombed, but there were also softer parts to relax your neck muscles. http://diablerie.fi/

A performance of ThE PhysicistS is always something of a happening – this time those scientists had dedicated themselves to the motto of this evening – school and teaching or better the end of it. Consequently, after enhancing our knowledge by writing several formulas on a the board, the latter got completely destroyed… a fan got some one-on-one-time – andsoon, which means that once again the show – featuring music in the like of Kraftwerk – was a lot of fun. http://www.thephysicists.net/

Before the previous performance many more people had arrived, and now the audience filled the venue to hail Fear Of Domination like kings, even during the Bloodhound Gang “Animal Sex” cover – I have to admit I don´t like the simplicity of the original… The band impressed with a not quite so decent make-up this time – which provided later a touch of “Walking Dead” effect when it started to crumble… They wrapped up the show with the emotional “Call Of Schizophrenia” featuring guest vocalist Helena Haaparanta – and indeed some had to fight tears… great gig! http://www.facebook.com/FearOfDomination

DJ MG had already warmed up the dance floor, which was used as such during of PROTEUS LIVE featuring ERILAZ. The fans supported the (hyperactive as usual) Proteus & gang cheerfully even though a black-out happened even twice… Well, it´s indeed difficult to sit still when you hear such heavy Techno combined with even heavier guitars. https://www.facebook.com/pages/Proteus/17712036908
https://www.facebook.com/erilazmusic

Day 2 was opened by Djs aQui and Freak, before Sihil entertained the rather sparse audience with his angry outbursts a la Henri Rollins. Or, well, imagine Nine Inch Nails as a One-Man-Project. http://www.facebook.com/pages/-sihiL/105703426103

During the Dj Toxic Greens Set the club had filled up nicely, which illustrates the popularity of the following acts. Khroma were the first to unleash the forces of nature – music, which is not quite properly described by their self-definition “Alternative Metal”. It´s a massive wall of sound, maybe to be compared with The Ocean, a furious genre mix including Death Prog Elektro Metal, passionately performed and simply great. You´ll surely read more about this band here at STALKER in the future… http://www.khromaband.com/

Passion, the second, with Iiwanajulma. This band had been a positive surprise at the last Findustry event, and this performance I liked even more. Perhaps because I already knew what to expect – Alternative-Post-Metal, Finnish lyrics and also much calmer – but no less intense – parts. Something to be recommended. http://www.iiwanajulma.fi/

Horror Rock was this event´s final live act, and I have to say that this time I was really impressed by Verjnuarmu. Maybe because their show, their fancy costumes and the crazy humour of those guys simply works better in a more intimate setting like this one at On The Rocks. They offered Walzer as well as a version of “Symphony of Destruction” in Savo-dialect in Finnisch). A great Findustry-finale, and the audience definitely enjoyed every minute. Who was still in party mood, could in einem intimeren Rahmen wie dem einfach besser funktioniert. The Djs Freak, Toxic Green and aQui entertained those who were still in party mood until the early morning hours. http://www.verjnuarmu.net/ 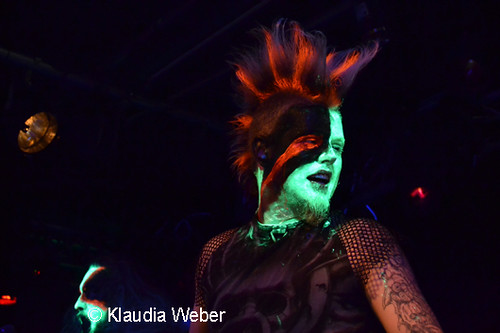