The organizers (Elektrik Products) must have had prophetic powers – when the “Findustry on Ice” event took place, the temperatures dropped a dozen degrees below zero, and moving from A to B in the city of Helsinki could have been easier using skates than ordinary footware. Luckily inside the club the ice could only be found in cube-form for drinks…

Friday January 11 – Findustry standards
DJ Kryotechnik (Infektio) and DJ MG (Khroma) were the ones to entertain the crowd on this evening off stage, the first on stage were Cold Cold Ground to entertain a still small but the more enthusiastic audience. Certainly those Industrial/Rock classics like “You will break” or “Disintegrating” did not fail to inspire; Mr Bunny & co did not really have to donate rubber-pig-snouts to get their fans joining in with the “pig” chorus.

In short – instant party. Always nice to see those guys on stage! www.coldcoldground.com

After such craziness and mayhem, ThE PhysicistS appeared to be a bit more earnest, well, at first. The craziness continued, just on another scale and with another style of music – which rather trancended into an experimental Devo-ish sound realm. Sometimes I felt reminded of Cleaning Women (the Finnish band using laundry racks and other contraptions as instruments), when strange sounds were produced, yet with “ordinary instruments” in this case. Out of the ordinary were definitely the musicians and their bizarre outfits, as well as their antics on and off stage. Not to mention song titles like “Oppenheimer” or “Little Whore (Einstein Intoxicated)”. Quantum mechanics in musical form – definitely. www.thephysicists.net

The club was full by then, in terms of audience attendance and attention the third act of this evening seemed to be the headliner… I had never heard of Iiwanajulma before, but that was a mistake. Difficult to place this band into a certain genre – they themselves list “Alternative, rock, metal”, and maybe the term “progressive” does the trick. The music contains different elements and styles, from aggressive *core to atmospheric-melodic-dreamy, with a front man who – besides working the synthesizer – sings emotionally, shouts like an animal and preaches intensely like a – well, Hip-Hop artist. In Finnish language, so I could not quite share the full enchantement the crowd was obviously feeling. But I understood Wille (voc), Tim (git+keys), Matias (b) and Teemu (dr) will release a second album soon. www.iiwanajulma.fi

The name Erilaz was associated in Finland with DJ-ing, until now – well, only a short time ago it had developed into a 3-piece EBM-Industrial Rock act, featuring more DJ colleagues with aQi Kuroshio (synth) and Proteus on guitar. A sound between Kraftwerk and Marilyn Manson, which invited the Goth people in the audience to dance and provided a nice transition to the party-aspect of this event. www.erilaz.net

Saturday January 12 – Kross over mechaparty
This day was in the hands of DJ aQi (Hellfire club) and DJ Meke (Discotheque necronomicon) when it came to the dancefloor action, on stage the first to take over the driver´s seat were The Closed. Or maybe should we say, they took over the rudder?

This time captain Toni Valha (also vocalist of Black Light Discipline) and his crew took their passengers onto a very special cruise, every turn of the trip was announced by a polite female steward, and they even offered free snacks. No idea why the passengers felt reluctant to approach the proximity of the stage – because it wasn´t clear WHAT the guys threw into the audience, respect towards the uniforms? Anyway, this wild cruise through all musical styles imaginable was a blast (as always) – and the snacks (fresh popcorn, in little plastic bags) were pretty good. www.myspace.com/theclosedspace

Kilt. also offered quite a wide variety of styles and sound, described by the band as “Alternative Metal”. I´d try to describe it as “The-Ocean-meets-Pink-Floyd”, performed by an “all star line-up”. All the band members are busy in other projects (e.g. Velcra), drummer Mikko Herranen is now quite a household name as Voice of Finland contest winner. Again a front man (Teemu Ruokonen, also drummer of Iiwanajulma) did two jobs at the same time, namely singing and providing keyboard/synthesizer sounds. And again a band member felt the urge to get a bit closer to the audience… Great show, and although it´s not quite easily accessible music, I´m looking forward to seeing this band live again. www.myspace.com/kiltdot

Bob Malmström could easily claim to be the most fashionable act of this event – all neatly dressed in suits and neck-ties, the drummer sporting an outfit rather associated with casual society-gatherings (golf or tennis club). Not the only thing that puts a big smile on your face – there was this Death Metal with Punk attitude, which they define as Borgarcore; they were consequently speaking Swedish to the crowd, only occasionally vocalist Carolus Aminoff added some Finnish words. And in the end Finntroll shouter Vreth joined as guest singer. Although they received several “brå” (= good!) shouts and even inspired a 3-person-mosh pit, he asked (in Finnish) “Does anybody even understand what I say?” Well, I did understand something sometimes, e.g. that there will be a second album out soon. www.bobmalmstrom.com

Two Witches are a legendary Finnish Gothic/Rock act who is celebrating its 26th anniversary this year, a pioneer of EBM in Finland, firmly rooted in the Gothic rock / Dark Wave genre and rather related to Sisters Of Mercy than Manson & Co. I had heard much about this band but never the band as such, so I was curious. The slightly reduced crowd knew most of the songs to sing along with or instead of the intense and sometimes scary front man and founding member Jyrki Witch. Again a nice transition to the dance / DJ part of the event – the band could have even been sneaking of stage and have their CDs played instead, nobody would have noticed due to this “fogging overkill” … www.twowitches.com 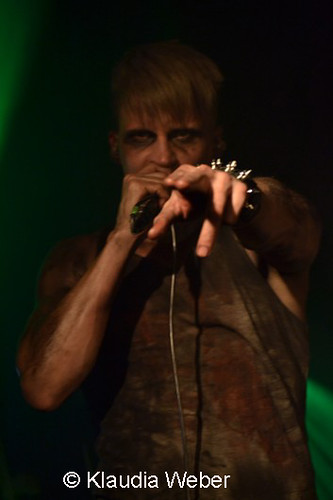 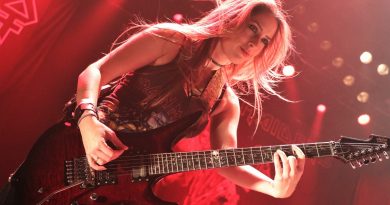