Sometimes already the drive to a festival turns into an adventure – and this was the case here. Actually, only about 25km were between me and Jübek, but only with online map services and festival directions I couldn´t really get along, so that I ended up driving maybe 50km and not just 25km. Once I had found the right directions, I was surprised how nicely small the festival was. A parking lot directly next to the festival area, everything totally relaxed and fully pleasant.

I just arrived in time to watch the last few minutes of Panacea Experience, and the performance I saw surely would have deserved a bigger audience than they had gotten so early on the day. The rows in front of the stage were sparely filled, nevertheless the mood on stage and also in the audience was pretty good – the audience even asked for encores, which were not played due to the really tight schedule.

The rows in the audience were getting a bit more packed when Ludwig van entered the stage and offered the people a great performance, spiced by an enormous load of joy of playing, a really good sound and much interaction with the audience. Despite all this, the audience first had to be convinced and that took surprisingly long – but once that was achieved, the audience had a lot of fun.

It continued with Vierkanttlager, who also showed a lot of fun whilst playing and power, yet they were not able to convince me through their music, and when looking at the audience I realized it wasn´t only me with this problem. The band´s performance animated the audience a bit to move – including some headbanging – but the clearly visible enthusiasm was nowhere to be found.

Shenaniganz, a band from Bavaria, managed to fully inspire the audience – a great setlist, consisting of German and English songs, diverse sound, the obvious fun of being on stage, power and really convincing vocals. Music-wise a top performance, and also the interaction between band and audience could not have been better, which the audience honored with a really good mood and atmosphere from their side.

Also, the American band Nations Afire brought an enthusiastic mood to the audience, the band´s fully rocking and rousing sound of their songs really pleased the audience. There even was a little moshphit, and it´s been just a little part of what was going on in front of the stage.

Haudegen, as a contrast, was dividing the audience into two groups – the one group who was fully enjoying the music and creating a great atmosphere and the other group, consisting of those people who couldn´t really find the pleasure in the played music and stayed silently in the background. One of the fans described the band´s music to me as „a mixture of Onkelz and Schlager“, which suits pretty well for my taste. What is set is, that the band had a lot of fun on stage and also showed that – which again rubbed off on the audience.

The next band on stage was the band Donots, and then the whole audience was going crazy – so much fun whilst playing, which the band presented the audience, just had to inspire the fans. A set full of rocking songs, funny interactions with the audience – no one needed more to have a good time, to celebrate the band and to enjoy every second of the performance.

The audience seemed to be not as enthusiastic as before when Jupiter Jones were on stage and played their nothing but solid concert. Nevertheless, the previous bands have had a high level of joy of playing and power, which was lacking here and that was clearly noticed by the audience. 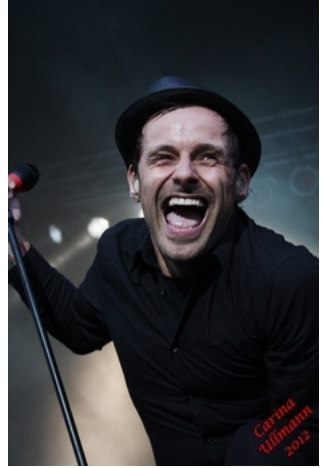 More festival photos HERE
A better mood was created by Fiddler´s Green, who were the last band of the evening, but no matter what they did, they could not keep up with the Donots. Fiddler´s Green offered, just as always, a fully swinging show with a really good choice of songs. The audience that was still left, was nodding to the songs´ melodies, but nothing more happened – I don´t know if it was due to the time of the day or the weather, I have to leave that question unanswered.

Conclusion:
Overall, the Jübek Open Air was a really nice and small festival, on which you simply have to feel comfortable – a nicely mixed audience, a relaxed atmosphere, fair prices when it comes to the food and drink stands, a good sound of the stage and a high quality line-up. There´s only one thing you can say about it: thumbs up!