This band has not only made some live impression on STALKER; Wankers of the Zoo Crew were awarded by British Radio station Total Biker FM as ”best international band” (New Music Awards 2011), and at Finnish Metal Awards this year they reached the Newcomer´s Top 10. And this without record company and denying the usual ways – they released, for example, their debut ”Modulated Launderings” exclusively as download on their website, for free… Enough reason to ask singer Tommi Salmelainen and Keyboarder Tommi Salomaa a few questions – which they answered in their own particular way…

Who are you – could you introduce yourself and all of the band members?
We are Wankers of the Zoo Crew.
Tommi Salmelainen – vocalist and bandleader
Harri “Göögä” Kuosmanen – drums
Juha-Pekka “Juhis” Tiainen Guitar
Vesa Pännäri – Bass
Tommi Salomaa – Keyboards

How did you all meet each other?
Salmelainen: I believe we met in pole dancing course back in 1983… I might be wrong.
Salomaa: Salmelainen and Harri knew each other from their previous band “Reprinted”.
I met Harri years ago and he asked me to check their band out after learning that I play keys.
We did have some changes in the string department, before arriving at this combination, where everyone in the band is gullible enough to buy Salmelainen´s vision.
Everyone is brainwashed. (Except me, I´m just playing along, don´t tell anyone)

When and why did you form this band?
Salmelainen: Both my shrink and probation officer recommend me to found a band to keep me away from the streets and my thoughts. With a good mix of antidepressants, this band and the right reptiles around me may occasionally make me seem as normal. Feels strange.

How would you describe your musical style, and how did this style develop? What are your musical roots and influences?
Salmelainen: The two best descriptions so far have been “something that System of a Down would´ve liked to write” and “Queen on steroids”.
I tried to make WOTZC sound much like Dr. Bombay, so a bit disappointing opinions, I´d say.
Salomaa: Someone has mentioned SOAD, Faith No More once..I think.. or twice.

In which bands have you played before?
Salmelainen: The Yardbirds and Cream. Oops, sorry. It wasn´t me.
Salomaa: Salmelainen and Harri were in Reprinted, which achieved moderate success even. Juhis plays also in a band called Trinity
I have been in various bands, none of which really got that far.

How do you write your music and lyrics, is it teamwork?
Salmelainen: During the nineties I use to hang out behind Faith No More´s rehearsing place and went through their garbages for seven years.
Sometimes I could find along Patton´s pee-bottles some papers with lyrics and noisy tapes.
Then I just keyed them in a computer program I coded 32 years ago with my C64.
Salomaa: Salmelainen gives us his creative fruits to digest, and then we´ll try to make sense of them, take them apart. We keep the parts that work, and ditch those that don´t.
It´s a Frankensteinian way of making music.
Lyrics are entirely Salmelainen´s domain. Actually I can´t even cite one songs complete lyrics. I don´t think anyone else in the band knows either, or cares, for that matter.

Is there a particular philosophy behind your works, or where do you get your inspiration from?
Salmelainen: Like said, it´s therapy for me and the other guys just want to earn a few millions from it. Suits me.

How did you come up with the band name – is there a story behind it?
Salmelainen: One night in 1991 I woke up ´cause of a restless hand syndrome. I picked up a pen to try to draw it off.
Soon I fell asleep and in the morning noticed “Wankers of the Zoo Crew” written on the paper. I had no idea what I meant or where it came from but now I´m certain that it was actually Freddie Mercury ghostwriting that.
At least that´s what he told me.

What are your goals, dreams, what do you want to achieve with your music?
Salmelainen: Just wanna grow up to be a better man. So far it hasn´t worked out. I still have ladie´s genitals.
Salomaa: I already achieved my personal goals with music, so I wonder why I´m still playing here… Maybe I´m still under some of Salmelainen´s brainwashing. Damn…

WOTZC - Down (Soundcheck at Semifinal 04/2014)
Watch this video on YouTube.

Are you looking for a record company or would you prefer to stay in the DoItYourself mode?
Salmelainen: I´m not looking for anything. I know where they are.
Salomaa: . We are open for all opportunities, but we don´t believe in miracles. We have got this far ourselves, and want to see how far we can get. It´s a snowball effect we´ve achieved now and we enjoy the ride.

What should an ideal record company for you be like, and do for you?
Salmelainen: The ideal company should have people that would become friends of mine. And with a friend I mean someone to sing me Delilah when get lost naked in the forest and to hold my hand during the electric shocks. Will you be my friend?

What are your live shows like? Does your singer have any martial arts training (not to hurt himself during the show etc)?
Salmelainen: They remind quite a lot of a religious mass with Jim Carrey as a priest who has had too much coffeine and laxative.
I´ve got a striped triangle hat in Turkish oil wrestling, but I think it doesn´t help me from hurting.
And I´m usually so numb after sniffing my fingers that I could do a show with my leg off.
Salomaa: When we release Salmelainen from his cage, it´s all rock´n´roll from there. I guess he has idiot´s luck – as nothing really bad has happened (as of yet…)

Some of you have tattoos – can you tell us a bit about them, e.g. why done and where/by whom, meaning of the motive etc?
Salmelainen: I´ve spent almost 9000€´s in the ink of my upper body. I hate every f*cking one of them.
For meanings and motives, please see the film Memento. They´re mostly done by my mom.

What´s the perfect venue/show for you?
Salomaa: Wembley arena.
Salmelainen: The venue has to have soap in the back stage toilet. If Wembley doesn´t have that, I´m out of there.

You recently participated in a band contest – what was it about, what happened? Did you win?
Salmelainen: I personally thought it would be a mixed martial arts cage fight with some skinny a** musicians, but it was all about playing.
It was just about getting some free booze for the radio channel who arranged it.
I know we won. They just announced another band as a winner.
Salomaa: We were invited to take part and we didn´t even know what it was all about. I´ve always been skeptical of band competitions and our experience kind of confirmed my skepticism; it´s all bullshit. We made it into the final, but we didn´t win. Someone decided obviously that this other band was easier to make profit from. I can imagine that.

Do you have a weird /absurd story to tell, e.g. about mishaps at a gig/tour?
Salmelainen: Well, once one of our deaf midgets refused to stick stamps in his nose ´cause he was a bit short of money.
Just kidding. Can´t remember anything that happened three hours ago.
If you could freely choose a band to tour with, who would it be, and why?
Salmelainen: Stevie Wonder. Simple just because he can´t see it coming.

What are your plans in the (near) future?
Salomaa: For the end of 2012, we´ve concentrating on making our second album.
Salmelainen: Go to bed and stop picking out my pubic hair.

Blind Guardian: No ice or cola! 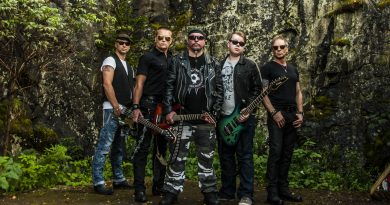 Mortiis: “We are used to never fitting in”