3.-4.8.2012 Hakunila, Vantaa, Finland
This year the festival was due in the first August weekend and not as usual in June, presumably the organizers hoped to have better weather and more people. Yet both didn´t quite work out, and there had been difficulties beforehand. The previously announced headliners Michael Monroe, Apocalyptica, Amorphis, Stam1na and Kotiteollisuus cancelled because of slow ticket sales, therefore there had to be a plan B: cheaper tickets and a different line-up – which at least on day 2 could have been a bit better.

Friday, August 3, 2012
The difficult task of opening the festival fell this year to King Sapiens who play a mixture of Rock, Grunge and Stoner, according to their own definition. What we get to hear isn´t bad indeed, we got to check the band out later at a club show. The at this point still small crowd cheers enthusiastically. (SM)

FM2000
A Klezmer music intro gives you the idea what might be coming next – and indeed, a crazy act with an even crazier mix of HC, Humppa, Reggae and Thrash-Speed Metal is a rare experience. Those guys are quite entertaining with their weird sounds and outfits and got the audience despite the rainy weather into a wild dance routine. (KW)

Amoral
You either like them or you don´t. Amoral seem to have lost some fans in the recent months, and I have no idea why. When singer Ari Koivunen joined the band, everything seemed fine. A possible reason becomes evident right away when Ari cannot find the right notes for the first song. Unfortunately also the growls – which he managed to do well in the beginning – sounded pretty thin. Hopefully they get things fixed before their tour in autumn and perhaps they just had a bad day. (SM)

Los Bastardos Finlandeses
Frankly, this act saved my festival day. It´s great when you suddenly feel to be in a desert, near a bar in the style of Titty Twister – even on such a rainy cold and windy day like this. A mixture of ZZ-Top and Motörhead, I´d say, and even Finnish metal dudes start dancing to this real cool sound. “El Taff Bastardo” proved once again with the encore Ace of Spades, that he sounds like Lemmy… I can just repeat the band´s cheers to the crowd: Muchos Gracias, Amigos! (KW)

TO/DIE/FOR
Sure, when those guys start to play it started raining cats and dogs. Incredible masses of water pouring down made it impossible to take photos – and just the attempt involved the risk of totally ruining your camera. Still the audience kept rocking with TO/DIE/FOR; Jape and his guys gave it all to inspire the drenched fan crowd. Keyboarder Juska had his own style, in pale-white make-up and body paint, wearing a skirt he looked like a Genie. The set list could not have been better with a mixture of old and new stuff. (SM)

Blake
Probably the best show of Blake I have seen so far. Was it because of the new blood in the band? You feel keen to hear the result of the 6-month-studio session, the album should be released soon. Blake played a set spiced with their hits like My Machine, Fresh in the Grave, DeathTripper, Spirit of Cain and surprised in between with the Black Sabbath Cover The Wizard. (KW)
I have seen Blake many times, but the combination with the new string section Ilari Hämäläinen and Euge Valovirta works a 1000 times better than what was happening before. Those two guys get the action going on stage, and even singer Aaro moves a bit more than usual. Great show, great music, this is how it should be. (SM)

Turmion Kätilöt
When the shock disco Rockers went on stage, the rain clouds disappeared, therefore a big crowd gathered in front of the stage. I had feared that many would skip the festival show, as TK had played this special unplugged show the day before at Alakerta (see STALKER report) – but I was wrong. A majority of visitors seemed to have waited for this band and therefore they well deserved the headliner slot of the first day. Who felt a bit disappointed to see Spellgoth wearing so many clothes got to watch a small weird side show from Sirkus Mundus Absurdus members – a lady was used as pin cushion. This inspired singer Spellgoth to pinch needles into his arms and hands too. (SM) 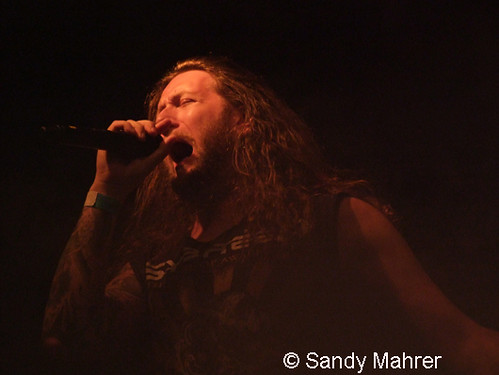 Saturday August 4,2012
After a short night the program of day 2 started already at 12.40 h. At least the weather forecast promised better conditions – which turned out to become true, a great festival day with sunshine , which meant a much bigger crowd, too.

Hammerhed
These guys have had their record release party in a local bar the day before. Maybe the reason why singer Pena´s face displayed so much pain so you felt hurt just watching him? Hammerhed mix various styles, Punk, Metal, Thrash – a bit of all of that, but mainly focusing on Grindcore & Metalcore – which is a bit too aggressive for me on such a beautiful day. The rainy weather the day before might have been a better fit, and also the stage show of this band needs some improvement. (SM)

Pelle Miljoona
The pioneer of the Finnish Punk scene hit the stage, and although this trio has been around for quite a while, they still have this „Fuck you“ spirit of 20year olds and played an energetic set without respite or rockstar attitude. An example for a lot younger bands… Despite the Bob Marley flag in the background, the focus remained on Punk/Blues/Garage Rock style and, naturally, the gig ended with their hits „Tahdon Rakastella Sinua“ and „Moottoritie on Kuuma“. (KW)

Fear of Domination
What a show – those costumes, those dancers and the fire effects (the pyros seemed to be the most harmless of those), at some point it even seemed that the stage was on fire… This is what I call a festival show. The music – Industrial Metal – was the right sound for such a spectacle. Those guys had raised the bar since last time I had watched them (Metalorgy 2009), because now all the elements fitted nicely – and the moshpit hardly ever stopped …
Thanks to special guest Helena Haaparanta (Crimfall) they could also perform a song they had not played live in a long time, Call of Schizophrenia. (KW)

Engel
were another positive surprise for me on this day. Death-Doom-Power Metal or something, with singer Magnus Clavborn shining with clean and rough voice as well. Still he should perhaps seek advice of a hair stylist, that´s a bit too much of uncontrolled growth … Hell, those Swedes indeed know how to rock, to pose and to flirt with the audience. I can just recommend to watch this band when they stop by in your area. Engel performed old and new stuff, e.g. u.a. Hurricane Season, Numb, Threnody and even Casket Closing from their first album. (KW)

Insomnium
What can I say – WOW! What you normally expect from Insomnium is sinister music, getting soaked in melancholy and a pretty boring stage acting. Well, that´s a thing of the past, the band made a 180 degree turn. It was a lot of fun to watch those guys, as finally something was happening on stage. That makes the songs of their 2011 Album much more appealing and inspire the audience a lot. What is left to say but: Niilo und Co., keep it up, don´t slack off and have old habits take over. (SM)

Steen1Orkestra
This was absolutely redundant. I´m open for a lot and even listen to some Rap or HipHop sometimes, provided that it´s well-made. But this? Metal riffs and a hyperactive keyboarder a la Dragonforce don´t make a Metal festival compatible act. Steen1orkestra in a nutshell – bad Metal sound and even worse Rap. If Rapper Steen1 had been good, I would be able to tolerate this, but this was one of the worst Rap acts I had seen, and he also didn´t seem to enjoy being on stage. The keyboarder was the only active musician in this band. With the exception of some few people, the crowd didn´t seem to enjoy it, maybe this was the reason they left the stage 20min earlier. (SM)

Amaranthe
I was anxious to see this band, as it was unknown to me, but I had read a lot of good reviews in other magazines. Singer Elize was known to me because of some Kamelot Shows. First of all, keeping the band in a thick fog cloud all the time isn´t nice, neither for photographers nor audience – most of the time you could just see vague outlines of the musicians. A suprise was seeing three singers on stage, besides Elize there was Andy for the screams – who did a great job – and Jake for Clean Vocals. Which was redundant, you could just have kept Elize singing his parts. In my opinion three singers are too much, and this combination didn´t cause “Oh,wow!” effects. Musically the Swedes tended to Pop but it appealed to the crowd, at least the front rows did a lot of headbanging. (SM)

Ensiferum
Has there ever been any MTR without Ensiferum? Well, as those guys keep the Kilts whirling with their Pagan-Metal hits a la „Into Battle“ or „Warriors“, or the heads banging and the crowd going nuts, there is nothing left to say but – a great headliner and a grande finale for this year´s festival. (KW)

Mortiis: A statement of independence