Summer festivals are getting more and more popular, and in order to satisfy the need for loud music, party, canned food and beer – and desastrous hygene situation, more and more sommer festivals pop up everywhere. Unfortunately this causes some decline in quality, some promoters buy bands by the dozen to put them on the same promoter´s festival tour.

But before I´ll be accused of being a killjoy – such lack of quality is not always the case, besides those few who just want a piece of the action, there are those who offer relaxed atmosphere instead of sell out, those smaller festivals with an equally small budget, whose promoters are true music fans who rather try to offer the best (within their limited options) than the most popular artists to their audiences.

One of those is the legendary Sauzipf Rocks – and it was a big shock that in 2010 after 10 successful years there was a hiatus. 2011 all-clear could be given, the 11th Sauzipf happened once again in Döbriach, Carithia.

The opener on late Friday afternoon was Stonedhedge, followed by German Dust Bolt, who made the yet not too big crowd mosh. After thatPeggy Germs rocked the stage, who were also one of my personal festival highlights. Their mix of Garage Rock, Punk and 60s was incredibly catchy and it was impossible to stand still. The local heroes Madog impressed with traditional Heavy Metal and a lot of fun. There was no local hero bonus for the Punk Band Total Chaos who had travelled the longest distance – from the USA. The Friday highlight for many were Baby Woodrose – the name comes from the Hawaiian plant and it described the program, nice Psychedelic Rock.

Madog – more photos in the gallery, see link in the top section!

Just like on the day before, on Saturday the program started pretty late, around 17 h. Early birds = people who actually get up before 17h, had the opportunity to join activities like competitive pig-eye-spitting or pig-eye-eating – as disgusting as it sounds like. Those who´d have different ideas of a „nice afternoon“ could spend some time in the nearby village, have a swim in the nearby Millstätter Lake or the even nearer brook – just in case you didn´t find the weather situation wet enough yet. Chances wer also good to have a closer encounter with wasps – those were a real pest this summer. A few words to the catering – after those mentioned competitions there were remarkably more people interested in the Vegan food than on Friday. But perhaps simply because it got around that the Vegan food was really excellent.

Mignon – more photos in the gallery, see link in the top section!
The local Lesson to be Learned opened the Saturday, followed by Seven that Spells, who replaced Stake off the Witch. Next on the bill were Lost Rivers from Germany, who created a very tight sound with their mix of Experimental and Psychedelic Rock. The Award for the Biggest Hair (although they used wigs, too) goes to Czech Malignant Tumor, who also entertained a lot with their rocking (Thrash) Metal. Some readers might have noticed already that nobody cared for tender shift of genres, therefore right after that Horn of the Rhino countered with sinister Doom Metal that created goose flesh. Some Goth atmosphere came with Mignon, all in costumes, and with their Rock sound they outweighed the atmosphere Horn of the Rhino had created. Stoner Rock from the UK with The Heads was on next, before the Anomalys rounded up the festival with campfire atmosphere.

Summary: Also this year Sauzipf Rocks Fans were not disappointed and we can be looking forward to the next festival in 2012. 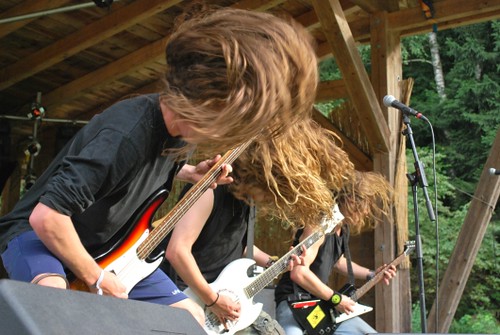