Three concerts, three STALKERs and three opinions – once again a band can feel honored with special attention: YOU GOT STALKED. Here you can find out how PAIN + support fared on their recent EU Tour:

Nosturi Helsinki, Sept 24
As Tarot dropped out of the EU tour, other bands filled the gaps at short notice. In Finland the 4 Pain-gigs were supported by Black Light Discipline – with new basser Toni Hintikka (who is with singer Toni also in The Closed). Luck for all parties involved, as STALKER witnessed in Helsinki on Sept 24: Nosturi was pretty full already, and BLD quickly got the crowd rocking with Aggressor, followed by Tides, On The Stars and For All You Heavy Hearted – a best-of their old songs. Naturally the new single Walls Inside Us was played, too, before the Bitter End-Cover ended this way-too-short set. BLD were enthusiastically cheered to – therefore lucky them, they surely won some more fans.

A lucky strike for PAIN , because their audience incl. lotsa “dirty Finnish women” was nicely warmed-up indeed, before the Swedes took the pretty much sold-out club by storm. Less lucky were only those delayed by the long queue at the door and thus missed the great BLD show … (KW)

Markthalle Hamburg, Oct 5, 2011
Turmion Kätilöt
Once again half an hour earlier than announced, the first band started playing, and therefore we missed the first two songs. Turmion Kätilöt are known in their home country as Finnish Rammstein on speed, and musically they definitely have developed since the first time I heard them back then at Tuska festival.

The band offers solid Elektro-Metal which is quite appealing, rounded up by their stage acting. A bit Rocky Horror Picture Show, a bit Troll, a touch of war paint á la Turisas – and you get 30min perfect entertainment. As in Hamburg nodding can express enthusiasm, and because nobody here really knows this band, those midwives of destruction (the translation of Turmion Kätilöt) had to face a rather small crowd which was not quite warmed up yet. Their final statement didn´t help much either: „We don’t know if you love your mothers, but if you don’t, be sure that we love your motherfucking mothers fucker mother…” We haven´t quite figured out yet what they tried to tell us.

Engel
I have to admit that I´ve never heard of those Swedes yet. This is a mistake, because Engel play exceptionally catchy Melodic Death-Metal.

Unfortunately the sound was so bad – it wasn´t that bad before – so that you partly had to guess how good those Swedes really are. It is a plus for this band that nevertheless the audience warmed up slowly and even formed a small mosh pit. Probably I wasn´t the only one who checked out after the gig at home, how they are supposed to sound like. Another highlight from Gothenburg.

Pain
With impressive stage design, monster drum kit and great light show Pain finally conquer the stage. Unfortunately the sound was just a bit better than Engel´s, and that could have spoiled the evening completely. However, Peter Tägtgren & co managed to distract from that with interaction, atmosphere and good setlist. The opener „Let Me Out“ from the new album „You Only Live Twice“ had people rushing in, and with the first notes of „Psalms Of Extinction“ even the chain smokers entered the hall, which hosted about 600 people this night.

Four more songs from the new album, “The Great Pretender”, „Feed The Demons“, „Let Me Out“ und „Dirty Woman“ convinced even those who doubted the qualities of the new release. The rest of the set was a cascade of Pain hits that did not leave anything to wish for. Even the sound person had mercy on us and managed to get the sound problems under control.

„Have A Drink On Me“ was performed as Sit-In to give those old bones some rest, as Peter said with a grin. Finally it was time for those Pain evergreens “Same Old Song” and “Shut Your Mouth”. Happy faces despite the crappy sound – Pain took over the crowd once again by storm. (Samira Alinto)

Zürich, Dynamo, Oct 12, 2011
To attend or no to attend – that was the question, and finally I didn´t want to miss Finnish Turmion Kätilöt when they play abroad. Yet it wasn´t certain if the concert would take place at all, as only a week earlier the promoter went bankrupt. But luckily it worked out to present Finnish and Swedish power on such a sinister autumn day in Zürich.

Right at the entrance many Nightwish fans caught my eye, who might have seen Pain as support of this commercialized act. And I assume that some people might not have noticed that Tarot had dropped out of the tour, due to family issues. That means those concert attendants surely had troubles to digest the first act of this evening.

Turmion Kätilöt
You could watch those guys easily from the concert hall before the show, because the backstage area for support acts is located on the club´s terrace. Definitely the slightly exhibitionistic Spellgoth didn´t mind at all. The small stage became even smaller by having Pain´s stuff there, therefore those 6 Finns had hardly any room to move. Some people in the audience were clearly shocked or even disgusted, when a barely dressed Spellgoth entered the stage, some shouted “Hey we can see your dick!” Turmion Kätilöt just ignored that, but certainly they could not conquer the whole audience. Only those who cheer to everything and everybody from Finland stuck out once again in an unpleasant way with their „Perkele!“ shouts. I had seen better gigs by MC Raaka Pee & co, but those guys cannot help it when they can hardly move on stage, therefore a big part of their show was missing. And naturally they cannot help having a prudish audience.

Engel
Admittedly I haven´t heard of this band replacing Tarot before and was prepared for typical Swedish sound – to my disappointment it was exactly what I got. I would have preferred some variety instead. You cannot complain about the styling of Swedish bands, therefore I was fascinated by the long black hair of the bass and the guitar player – as the sound wasn´t my cup of tea anyway. One of the reasons might have been the bad sound in the big hall of Dynamo, and also the lights were bad for photographers – only red and blue. Perhaps Engel should change their light guy. Nevertheless, people seemed to enjoy their show.
Pain
It seemed that the Pain changeover took an hour, and the anxiety increased – what is hidden behind those black curtains? Finally the secret was revealed and you could see a wall of screens that displayed a variety of pictures during the show. Not only Tarot but also Pain had some changes due to family issues – bass player Johan was missing as he nurses his child, while mother Anette Olzon (Nightwish) is on Promo tour. He was replaced by Clawfinger Basser Andre Skaug.

Pain shot of some of their best songs right at the beginning, e.g. the brand new hit „Dirty Women“, which is not quite fitting into the usual Pain material. But there´s nothing wrong in re-inventing yourself. Peter Tägtgren seemed tired and over-worked, those dark circles around his eyes covered a big part of his face and made him look older than he really is. He wasn´t looking healthy, definitely. The know workaholic who cannot keep his fingers off making music even for a second – not only with his own bands, but also for others as song writer, producer etc. I have to admit that I have always admired this guy, especially as musician. But somehow things have changed in recent years, perhaps because it is “in” nowadays to like Pain – only because they were touring with Nightwish and are pushed by Nuclear Blast. Well, perhaps Peter Tägtgren should give himself some time-out before he is forced to have one… The concert in Zürich was solid Swedish quality work but perhaps too much of a routine job – I had seen better gigs. But all in all their shows are always worth to watch! (SM) 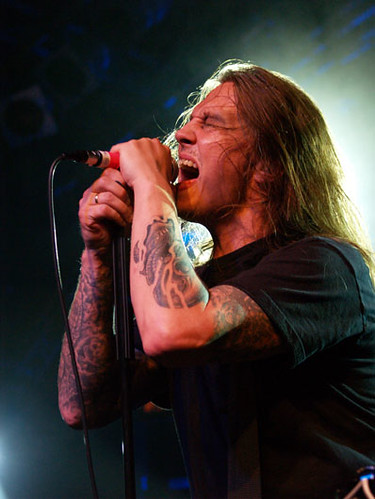