If you have visited too many massive festivals with thousands and thousands of people, huge camping areas, queues and too many bands to digest, a smaller festival with excellent and well-selected line-up feels like a refreshing breeze. Finnish Jalometalli is cozy and something between an open air and a club festival. The main stage is set right outside the large venue Teatria, and in the club there is another stage. This year there was also a smaller stage located in a backyard, providing a nice arena for new emerging bands. On the other hand the problem of three stages is that it´s impossible to see all the bands you´d like to see.
Since Jalometalli has no camping area, the best option for accommodation is possibly a hotel package including festival tickets. If any negatives things must be mentioned, there´s the price of the booze and the most stupid smoking ban ever heard of. You can´t smoke in an outdoor beer area? What next, no drinking either?
Interactive photo gallery at the bottom
The festival was on full swing when we arrived on Friday almost straight from the airport, just in time to see Napalm Death. Although over the years the songs have gotten longer and the guys balder, they still sound fast and raw and unapologetic.

Neither has their political antiwar message gone stale or started sounding fake, not least because of the sincerity and fury the vocalist Mark “Barney” Greenway puts in both the songs and his in-between statements.

One of the pleasant surprises on Friday was the Finnish doom band Caskets Open who performed on the small stage with calmness and concentration that was a joy to watch. This band is definitely one to check out again. As Caskets Open got our full attention, only a few songs were left in the set by LA thrashers Evildead by the time we finally got to see them at the indoor stage. But it must be admitted that it was not a huge loss. Not bad but not very exciting either.

Groovy is not the exact word to describe many metal bands but it fits perfectly for the main band of Friday evening, Sepultura. The mighty shadow of Cavalera brothers has been choking them for many many years, but only the most stubborn can still long after the “good old days”. Sepultura nowadays and Sepultura of the past are two different entities, and although it is great to hear old classics, the band definitely doesn´t have to lean only on them or their past reputation. Singer Derrick Green has proved to be a powerful front image for the band, and he swayed and growled onstage and also beat drums with such vigour that you could almost feel the chilly northern Finland night air getting heated up to steamy South American temperatures.

Their guitar player Andreas Kisser, who has been in the band almost since the beginning, plays a major role in Sepultura´s sound. His professional approach on both playing and performing makes him one of the most influental guitarists in the metal scene. Since the night had already darkened during Sepultura´s gig, also the skillful light technician played a big role in making the show a strong experience.

On Saturday the slowly waking audience was greeted with sunshine and the afternoon gig of Finnish thrash metallers A.R.G. who have only recently regrouped after almost 20 years. Old fans (and perhaps family members?`) seemed to have gathered, because there was a small but eager moshpit going on during the whole gig. Such enthusiasm and the sight of the guys (well, middleaged men, as the vocalist Tepa Karjalainen stated himself at some point) enjoying themselves playing old A.R.G. songs after such a long time did bring a wide smile on one´s lips. The material has not aged at all, although the band found it an “interesting” example of the composing skills of young thrash enthusiasts twenty years ago. Maybe there is nothing more serious to this regrouping than just having fun with old bandmates – but sometimes it is enough. Well, at least their sound / light guy took his tasks very seriously: pretty triggerhappy, he kept the smoke machines running, so that the band could often only be heard and not seen…

Another Finnish regrouped band Oz did their best on the indoor stage but a few songs was enough this time. We were not impressed enough to even try to catch any of the signed frisbees the band was throwing into the audience.

A real pleasure to experience live, UK thrashers Evile played a vibrant show on the main stage. Listening to their authentic thrash metal tunes you can hardly believe they´ve only been around for seven years. We got to hear both old and new songs including a few from the upcoming album “Five Serpent´s Teeth”.

There was not a huge crowd gathering inside when the Swedish heavy metal band Grand Magus was about to start their gig. Probably the majority of people were still recovering from Evile´s thrash attack or getting hydrated and thus watching the band from the beer area. Those who made it to the front of the indoor stage were set in the mood with an intro from the soundtrack of Conan the Barbarian (groarrr!) and then Grand Magus filled the club with a wall of heavy metal riffs and catchy songs.

The Swedes shared the slot with local death metalists Napoleon Skullfukk, whose low growling made it an interesting act to catch before Entombed. There was a nice bunch of people gathered in front of the small stage, probably because of the good impression the band gave at Jalometalli Winterfest in 2009.

No doubt one of Saturday´s most awaited bands Entombed kicked ass on the main stage, as expected. There was a large moshpit going on in the front and the energetic crowd seemed enjoying every song played. As an extra delicacy the set included a cover of the impassioned Roky Erickson song “Night Of The Vampire”. In the lead of easy-going yet powerful frontman Lars Göran “LG” Petrov Entombed entertained the audience for 75 minutes. With two guitars the band sounded incredible and all in all the show was a pleasure to watch and listen to.

Another band highly anticipated by Jalometalli audience was the good old Sodom from Germany. The show delayed because Mr. Tom Angelripper was still sleeping at his hotel room when the gig was supposed to begin. Another setback was that their gear got stuck at Helsinki airport and using borrowed guitars there were some technical problems during the set. Nevertheless the crowd seemed happy and afterwards the performance was mainly praised by fans.

The festival ended with excellent gig from Cathedral who announced that by the end of this year the band will be deliberately split up. The audience was treated with a long and hypnotic show, the frontman Lee Dorrian conquering the stage with his characteristic bent-out posture and creative usage of microphone cord, leaving no one cold.

All the people gathered in Teatria seemed to understand it was their last chance to see the old doom rockers playing live and greeted songs such as “Cosmic funeral” and “Hopkins (The Witchfinder General)” with huge enthusiasm. It´s a shame to see them go, because judging from the music and the gigs seen in the last two years they don´t seem to be tired or winding down. But better to end it with style instead of becoming a sad shadow of a band just because it´s too unconvenient to let go. Cathedral will be missed but hopefully new good things are coming up…

The official afterparty concerts (with Finnish Sacrilegious Impalement and Ajattara) took place at Nuclear Nightclub in the center of Oulu on both nights. Another popular club Hevimesta also attracted metalheads after the festival area closed around 2 am. Despite the new smoking restriction (causing security guards extra work and festival guests unpleasant disturbance), Jalometalli was again well organized and got to celebrate its 10-year anniversary with a largish crowd, awesome bands and nice weather. An almost extraordinary number of oldschool metal fans added a special atmosphere and, occasionally, it felt like travelling back in time. A big plus – the practically situated beer area which made it possible to move and see all three stages with no need to hurry emptying glasses when another band was about to start elsewhere. Another plus for reasonable ticket prices, one-day ticket 50 and two-day ticket 67 euros. 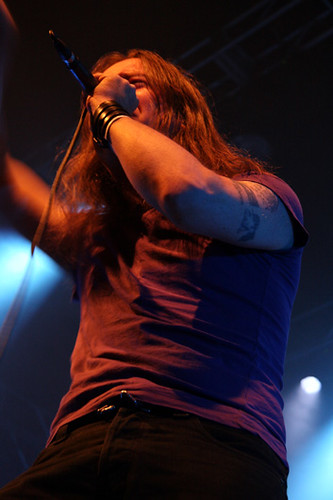