7.-8.8.2010 Pori, Finland: From almost tropical heat and humidity of Saturday to the mad thunderstorm on Sunday – one of the main performers at this year´s Sonisphere was definitely the weather. Perhaps the Polish black metallers Behemoth were wise to cancel their gig a few days before the festival, as the scorching sun on Saturday would most certainly have melted the corpse paint from their faces. Replacing Behemoth was Negative, the Finnish pretty boy rock band – so instead of running corpse paint we got to see smeary mascara on stage and teenage girls melting in the audience.

Serj Tankian
The Negative boys were followed by madly grinning Serj Tankian
who trusted the power of his extraordinary voice to outdo his very casual clothing and otherwise minimal performance. The 69 Eyes and

Apocalyptica
kept the audience rocking, but the winner of the day was The Cult who played an energetic and electric gig, spiced up with Ian Astbury´s cynical comments like “Do you like rock music or do you just like to dress that way?”, aimed at the people concentrating more on beer than the music.

Alice in Chains
followed right in their wake with the rooster-like frontman William DuVall leading the show and finally, after Volbeat´s pounding metal n´ rock, more teenage melting occurred as
HIM ended the first day with a sugary blast of love metal.

Sunday morning started even hotter than the day before, turning the tents at the camping area into saunas. Sweating and beer-thirsty festival guests soon filled the main area as the Finnish bands Insomnium and

Mokoma and Anthrax
still got to play for an audience basking in the sun, but one can only wonder if Thor himself got annoyed about Slayer´s quite short gig, or if his favorite song didn´t get played; suddenly some really malicious-looking clouds formed in the horizon and before anyone even realised what´s happening, a short-lived but furious thunderstorm swept over the area, turning it into a war zone.

Anthrax
Tornado-like gusts of wind seriously damaged both stages and blew Alice Cooper´s and Mötley Crue´s gear to smithereens. Everyone got soaking wet in the pouring rain, and unfortunately about 40 people got injured, a few seriously*, by the metal fences and merch stands flying around with the heavy wind.

Slayer
The damages on both stages were so severe that for a long time it was uncertain if any of the remaining bands could perform. The waiting audience was cheered up by Iggy Pop who suddenly appeared to perform an acoustic mini set. As the soaked clothes started drying and the beer flowing, the storm-wrecked feelings also rose from the muddy ground back to festive levels. Nothing could cheer up Mötley Crue fans though – the second stage was damaged beyond repair and the band had to cancel their gig. Apart from Mötley fans, there was no limit to joy as Bruce Dickinson of Iron Maiden himself appeared on main stage, thanked the audience for their patience and announced that

Alice Cooper
and Iron Maiden would both play full sets after the stage was fixed. And those gigs were well worth the wait! Alice Cooper´s band played with gear borrowed from Slayer, and the maestro himself put up the good old horror show like nothing out of the ordinary had happened.
Iron Maiden started almost two hours late but gave the audience an unforgettable performance consisting mostly of newer material and whole new stage visuals. Bruce Dickinson showed a noteworthy skill of multitasking by singing and drying the wet and slippery stage floor with towels simultaneously. During the set, a thick fog descended over the festival area – a perfect surreal ending to the surreal day as the skeletal remains of the second stage rose from the foggy darkness and cones of light swept over the steaming audience who were singing “Fear of the dark” to their hearts content.
Truly a concert and a festival to remember for a lifetime.

* August 12, 2010: “We have just received news that the 50-year old male that was critically injured during the freak storm  at Sonisphere has passed away. We are obviously shocked and devastated and would like to offer our most sincere condolences to the family and friends of the victim –the thoughts of Team Sonisphere, Iron Maiden and all Sonisphere fans are with you.” 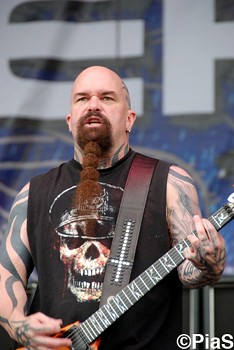 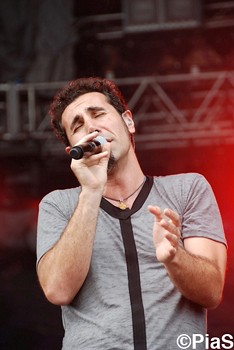 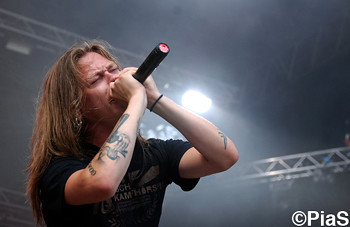 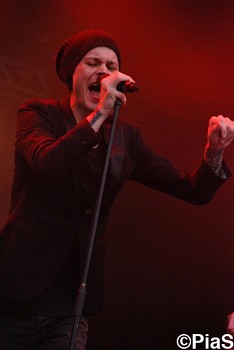 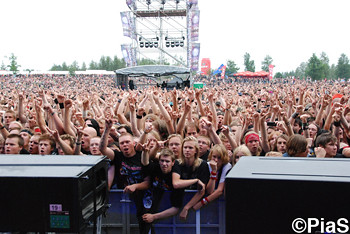 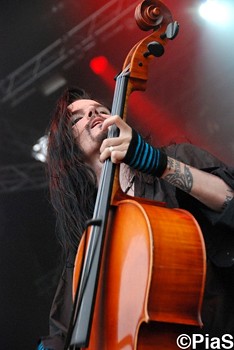 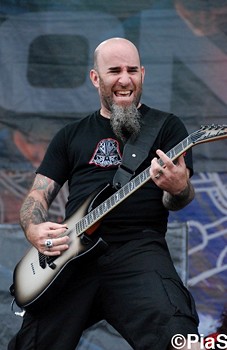 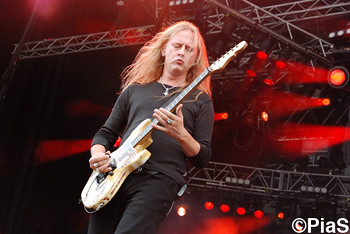 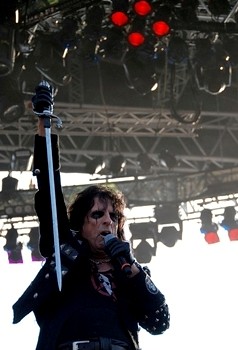 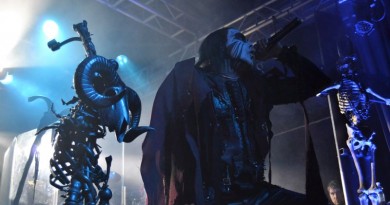 Amaranthe: Don´t forget to have fun!