During their Forging Europe Tour (see our report about it), Amorphis guitarist and mastermind Esa Holopainen found some minutes to talk with STALKER about the new album, the tour and future plans.

How´s the feedback so far for the new album?
Very nice, we released it in April, but promoted it after the Festival shows. So it was very cool to see how the people reacted hearing the new songs live. That feels good.

And the tour?
It´s the last show this evening, and it lasted five weeks now. Tomorrow we go back to Finland and play several shows then. We´re glad to play with so cool bands like Amoral and Before the Dawn.

What are you going to listen to when you´re back at home?
I guess I will listen to the classical bands like Led Zeppelin or Black Sabbath, but this can vary and also depends on my mood.

So let´s talk about your last album.
The writing process started round a year ago, we had a lot of ideas and ended up in recording 15 tracks and also some bonus tracks. It was a nice process like in Slient Waters. I don´t know what will be on the future album, but I guess we will continue in the same way.

Let´s switch to history, what was the funniest thing that ever happened during a tour?
There were a lot of stories I could tell you, the funniest one I remember was in France, I guess it was about ten years ago. We didn´t have a toilet in the backstage and so the bass player urinated in sort of a beer bottle. After the show some people came in and there was a drunken girl, she just saw the bottle filled with the piss and drank it like water. All the others who knew what she really drank just thought „oh my god!“

After this good story, what was the funniest thing that happened to you?
Hmm let me think a moment, it was while we recorded the Elegy album in London, I broke my arm there and spent some days in hospital. Ok that wasn´t that funny…..well I can´t remember anyway.

Maybe on this tour?
Yeah hard question, you just wake up, prepare for the show, play it and go back to the tourbus, there aren´t much possibilities for funny moments.

What are your plans for the future?
We just started to work out our DVD, we´re going to release kind of a best of album and at the end of this year we are going to work on our new album…yeah many things to do for us! 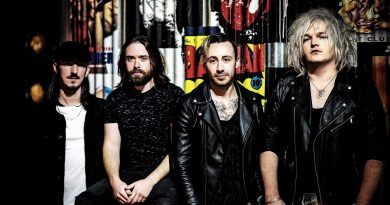 DeeVer: A bag of good shit!