„In Booze We Trust“ – that´s already one of the basic prerequisites to make it big in the world of rock. Thytopia from Austria want to do exactly that with their melodic thrash-death metal and are starting to make a name for themselves also outside of their home borders. They´ve already put their live abilities to the test for some time and now the debut album, which is scheduled for release in summer, is supposed to get the band still a little closer to their goal. Be prepared!

Hello and how are you?
Fine, thanks! We just played in Czechia for the first time in our career and apparently we made a quite good impression there. Something like that is really good for the mood.

Who is Thytopia? Could you, please, introduce the band members shortly? What are their worst and best features?
There´s Lidia on the mic and her best feature is that she´s interested in all sorts of things. Be it art, films or many different musical genres. Rich, our guitarist, is an extremely ambitious musician who always tries to strive for perfection. Our drummer Berny is a lovable whack job who always puts everyone in a good mood just by being around. Apart from that he can put his whole fist into his mouth (don´t know if that counts as a good feature but I just wanted to mention it). Last but not least there´s Chris, the bass player. His best feature would be that he could continue as a solo entertainer after his music career – which means that he´s always quick with witty remarks. And about our spleens – well, THAT´S maybe a topic that should not be discussed in a music magazine. Maybe rather in “Psychology Today”, hehe.

What cartoon or comic characters would describe you best?
Rich would probably be Papa Smurf. He takes care of all the booking, generally works his derriere off for the band and keeps the wheel turning. Lidia is the Incredible Hulk. Most of the time she´s rather in the back, the nice girl next door but when she´s onstage and sings the first notes you get the impression that she literally goes beyond herself. Berny is a mix of the Tasmanian Devil and Animal from the Muppets. Put him behind a drumset and you will know what I´m talking about. Chris is probably our Homer Simpson. He usually doesn´t do more than necessary but in the end you still get something that can keep the audience entertained for half an hour. A natural born bassist!

Your band name Thytopia sounds to me a little bit like a medical term, is that intended? How did you come up with it?
No, it actually wasn´t intended and so far we haven´t even noticed it. The name is rather a reference to “1984”, “Brave New World” and somehow also to the world in which we live our dreadful little lives. Nevertheless, it was rather a spontaneous idea before a show.

You formed the band, however, under the name Katharsis…
That´s right. Unfortunately we came to realize that this names seems rather popular and, to avoid possible lawsuits, we decided to change our name. The good thing about it is, that if you google our name now, you get about 2400 hits and they are all really US.

The release of your debut album was postponed many times so that you could play live more often. How are things at the moment? Is there some kind of release date or maybe an album title?
We will go to the studio in the beginning of April and, when everything goes as planned, the CD should be available in summer. Those who want more up-to-date information can check our myspace page (www.myspace.com/thytopia) from time to time. We haven´t decided on the album title yet but it will certainly be revealed shortly on our homepage or myspace page.

What are the songs about? What´s your inspiration?
The lyrics are about everyday life. Certain situations that you experience or also just things that you wonder about. We draw our inspiration primarily from incidents that affect us in one way or another. It could be a conversation with other people, a newscast or simply a line from a book that you just can´t get out of your head anymore.

How do you write songs in general?
One (mainly Rich or Berny) comes up with some riffs, sometimes with a whole song and then we go it through in the rehearsal room – quite old-fashioned. Mostly one or the other also suggests some changes and in the end we have a song to which the whole band has contributed.

What´s the most important thing that a good song should have?
A clear line. Songs that change rhythm or tempo after every other measure or songs that are overly ambitious just show that the musicians know their craft but it´s, unfortunately, very demanding to listen to it for a longer time. Also important is a catchy chorus or a hookline that sticks in your mind.

How would you describe your sound with 5 adjectives?
melodic, groovy, stirring, sophisticated, unique

How difficult is it for an Austrian band to break the international market?
I think it isn´t harder than for a band from any other country. There are also a couple of Austrian bands that have proved that already. In the end it´s only important WHAT you do and not necessarily WHERE you´re from. Quality prevails, no matter what place you call home.

„In Booze We Trust“ – is the motto of the band?! What has been your most debauched rock star moment so far?
I don´t know – if you still remember it the next day then it wasn´t debauched enough… But from stories we know of Berny´s exhibitionistic streak, a destroyed store window and the subsequent visit to the local police station. Excerpt from the corresponding police report: “It turned out that the damage of the store window (including consequential damages) were caused by a fall”. Other legends speak of Chris who, in his wild times, woke up after shows in hotel rooms of strange girls in the middle of nowhere. Of course without money, a lift or just the slightest idea of how to get home again. Naturally, we still deny those kind of tales unless there is hard evidence.

From well-informed sources I´ve learned that she stocked up on heavy metal karaoke DVDs on her last trip to Finland. Did she already try out some of the Finnish songs, maybe by Finnish Eurovision hopefuls Teräsbetoni? Is there a plan of performing those songs at some of the Karaoke bars in Helsinki?
Lidia: Unfortunately there are no Finnish songs on the DVDs but I´ve heard of Teräsbetoni. Apart from that, my Finnish pronunciation … well, let´s put it that way, it needs some improving. But for my next trip to Finland I will try to learn some Finnish songs. Remark Thytopia: We consider to do a Finnish song for our upcoming album, Lidia will sing in English but we will play in Finnish.

Furthermore I was told that she took her first singing lessons. How was that?
Lidia: You live and learn. On the one hand it is interesting getting to know the so-called “Real Balancing” technique but on the other hand it isn´t something that I could use for Thytopia. This technique is rather something for advertising jingles but not for this band.

How do you earn your living? What are you doing besides the music?
Richy is a student (which means he has to get up everyday at 6 o´clock because at 6:30 all the shops close), Berny does field work for the employment office (just because it sounds better than saying he´s looking for a job), Lidia is a permanent self-employee (which only means that she works herSELF and PERMANENTly but somehow she seems to have found a loophole here) and Chris is a butcher (because as a bass player he´s the only one who could afford to lose two or three fingers)

What can people, who want to see your show, expect?
A great show, good music and four musician who have visibly fun playing live. And of course debauched aftershow parties true to our motto.

What are your ambitions with the band? Where do you see yourselves in 5 years?
Hopefully on tour with a new CD under our belts. We´re only at the beginning, so it´s hard to say where we want to be in five years. Of course, it would be great, if we could live on our music by then and wouldn´t have to depend on 9-to-5 jobs so that we could dedicate ourselves to the band completely. The only really important thing for us is that we then can still play the songs that we want to play and that we still have fun to play live. About everything else we can talk at the latest in 5 years, then we will know much more.

What are your plans for the near future?
The next thing is of course to record our CD and then we hope that we can present the songs live as often as possible. Maybe even within the scope of a small tour? So, if this is read by a booking agency: Engage us as long as we still demand favourable fees, hehe.

Thanks for the interview and good luck with the band! 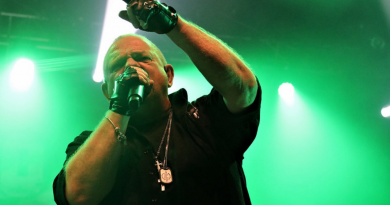 Shape Of Despair: No songs of joy