Coming from Germany and having experienced themed high-end events at renowned Gothic castles throughout Europe, historical events at Versailles and heavily costumed fairytale Gala balls, I must admit I had modest expectations from the medieval festival in Häme. In light of current events, it caught my interest since unlike most of the continental EU, Finland did not postpone all its public events until 2021. Attending a live open-air festival in August 2020 felt like an exquisite treat for the “privileged few”. Few in this context means the tens of thousands who turned up in Häme that weekend. But in any case, you had me at “event goes on as planned, no cancellation”.

Now, Hämeenlinna is one of the oldest but small inland city in the south of Finland, which hosts this annual medieval fest (Hämeen keskiaikafestivaali) in its scenic location at its waterfront castle. It’s a hidden gem, just an hour’s train ride away from the capital city. The difference this time in the context of the global pandemic, compared to previous editions, is the level of fame of the bands and the heightened amount of disinfectant stations around the festival grounds. Otherwise, not a sign of that trouble. After months in isolation, don’t we all crave this long-lost utopic “normality” in any form or function? I found mine in Häme. 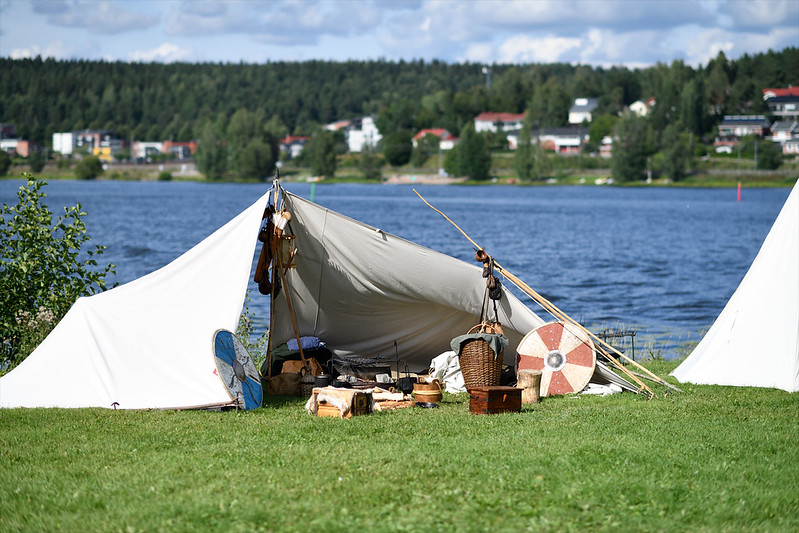 The festival impressed me right away at the entrance: attention to detail in near perfection, starting from the main gates, where the guests are greeted by a wizard and his magical helpers. All personnel are dressed in historically appropriate (medieval) clothing, made from linen and matching handcrafted accessories. After ticket checks, you pass a large stall with costumes for rent, so even if you came without, you could still slip into something more appropriate on the spot. What heaven, especially for the younger attendees, to enter a real experience of festivities as they might have happened a few centuries ago. To compare the feeling, it was like entering Efteling (NL) for the first time, when you don’t know what awaits you there, but you float on anticipation of magic with fairy dust sprinkles all over. 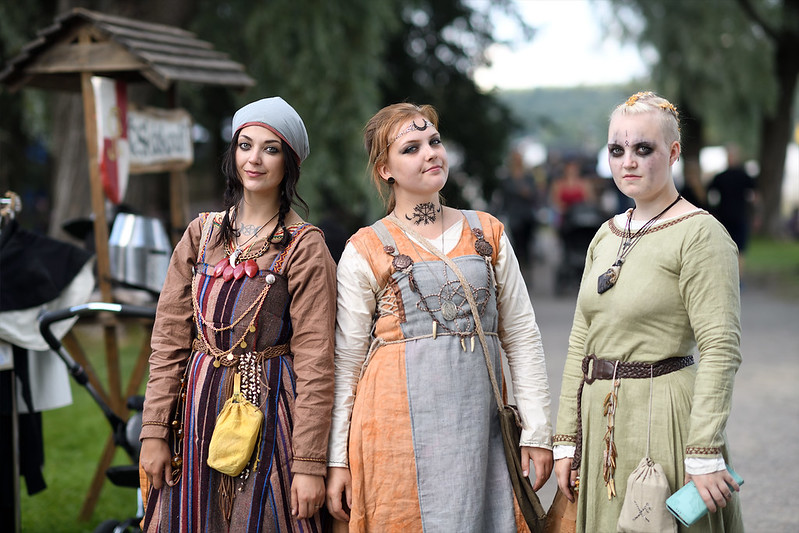 The main festival starts with the market, endless stalls of everything imaginable, from edible goods to handcrafted leather accessories, more clothes and more food and local drinkables. Having already been to many similar events, usually the vendors rotate around and carry the same stock, making it hard to find something new and different than honey-mead in funny shaped bottles. But in Häme, I did not experience repetition. 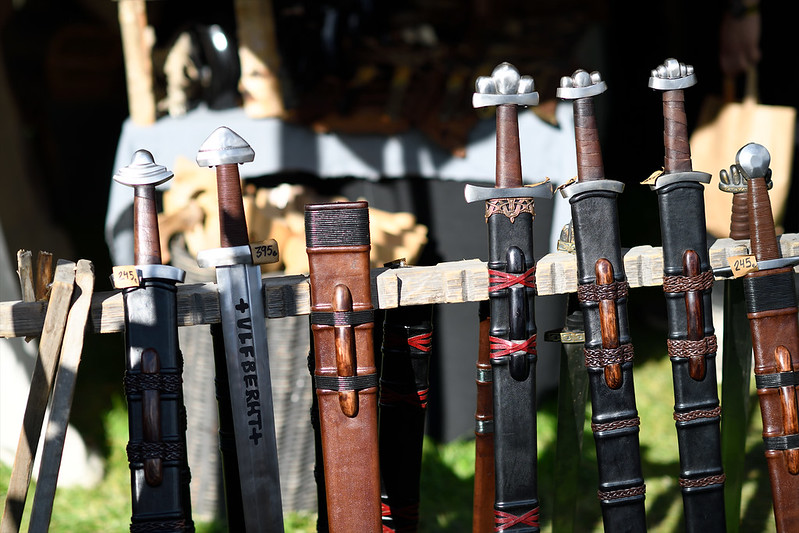 Crafted products, unique hand-made curiosities, new designs and genuine approach to very authentic-looking medieval keepsakes. It captured my attention and I wanted to walk around more and actually look at all in detail. Besides, the tents and stalls themselves were all done and set up with high historical accuracy. The Taverna area, the largest center point of the festival with food stalls, a selection of bars and a stage hosted the fun bands who invited to dance. Visually a feast for a timeless romantic, it felt totally teleported into a different time. 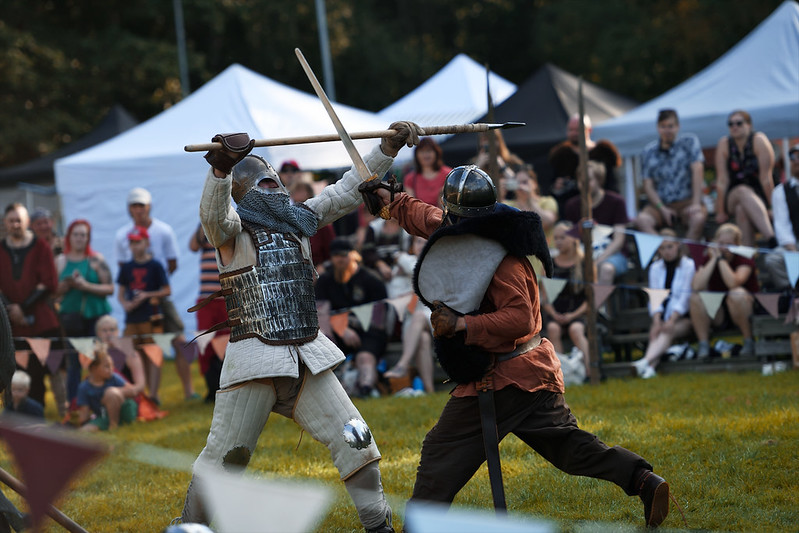 In spite of current limitations, the program had a lot to offer and I had to make choices where and what to see, and what to miss in return. The festival grounds spread over a large territory, and there was a lot to see. In the medieval combat sports there were Viking battles and then there were knights. The only disadvantage was the time and place: first tournaments started as early as 10am and it was already boiling hot, not a cloud in the sky. I did not expect to come back from Finland with a sunburn, but I did! 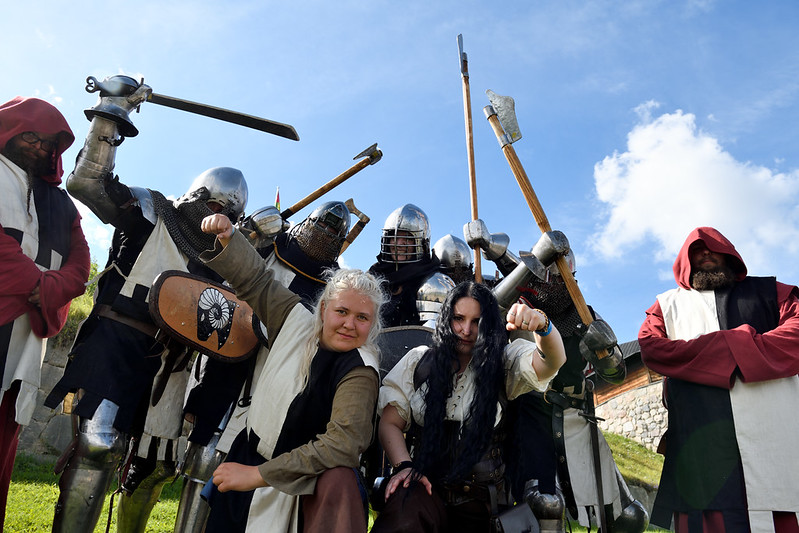 Even though in the recent past we’ve been so spoiled with the amounts of releases on all things “Viking”, their battles sadly had nowhere near the amount of interest and attendees, as compared to the knights’ tournament. Both were overlapping, so I found myself torn between the two arenas, but the knights won my attention. It’s an emerging full contact combat sport, called buhurt (from French “bouhourt”), where men and women dressed in authentic medieval full body armor fight each other with just as authentic hand-held weapons (blunted for safety). The fights can be as personal as 1 vs 1 or 3 vs 3 to the most epic of them all, 150 vs 150 (world championship that happens annually at Battle of the Nations, the “Olympics” of the sport). Whilst I am not normally an avid sport spectator of any kind, these battles won me over – hard. I forgot to blink or breathe whilst watching. Armor with fine detail and beautifully crafted, being put to the original and best of uses. No two armors are alike and each set and piece is personally crafted for each individual fighter. The fights themselves are emotional and high-paced, so in a few minutes of action, you find yourself losing all your lady-like behavior, sighing and cheering and screaming along for your favorite team. I am surprised how this sport hasn’t gained a bigger following in the German medieval scene and festivals yet. I do hope it will hold a wider public recognition and interest, because it is the most spectacular visual that I’ve experienced outside of live bands and special effects staged shows. 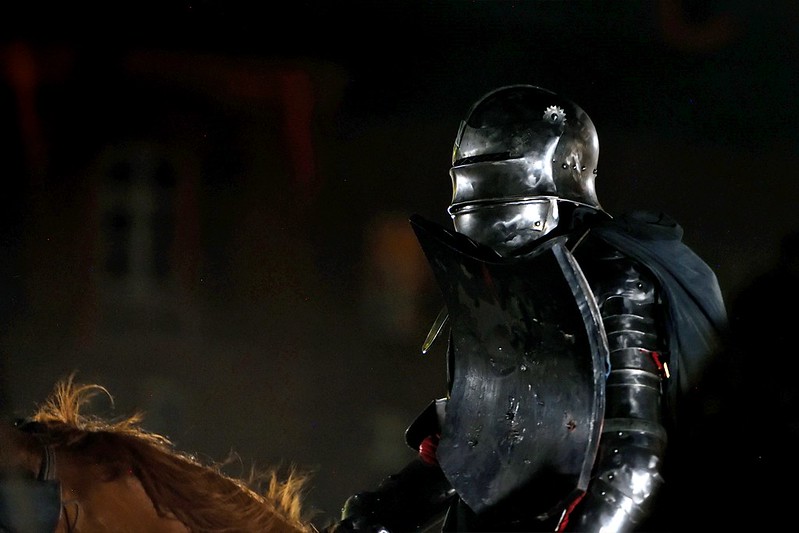 Speaking of handsome action in armor, later in the night, after sunset in fact, the festival offered another visual beauty – fire jugglers and a horse show. That event required an additional ticket and we thank the organizers for assisting our journalists with the access to the show. The event was set up in the courtyard of the castle, with no allocated seating but with green heels, where we happily found a good watching spot with a perfect overview. Very authentic atmosphere amidst castle walls, starry night and the smell of burnt torches in the air, just missing the mead. Somehow, the appeal of drinking mead this time was lost on me, but I did catch up with my ciders and local beer-based varieties. 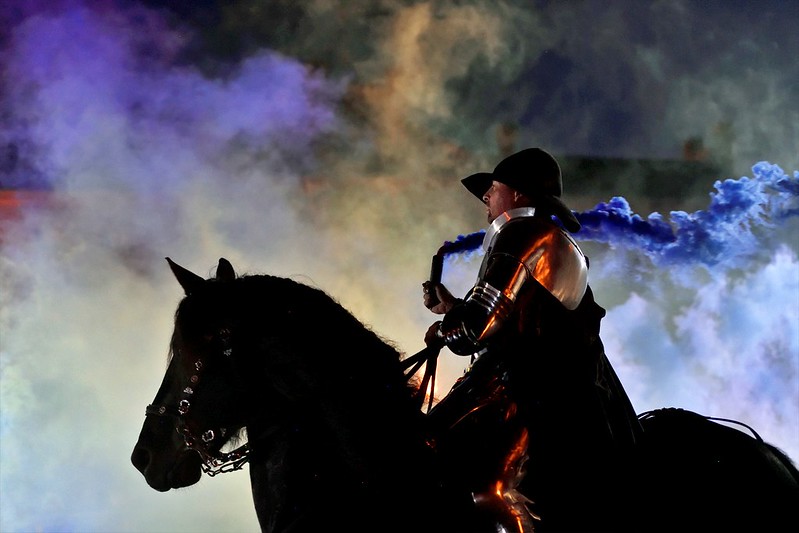 The horse show (by Rohan Stables) was a gorgeous sight, illuminated by fire, beautiful soundtrack and special effects. Gorgeous costuming and a well scripted storyline, to illustrate the elaborate tale. It told us about tragically separated siblings, but united at a later point through struggle, search and a fight. Now there were also knights in armor, but this time on horses and armed with lances and spears. The voiceover was in Finnish, so I could not follow it to the letter, but the visuals and perfect horse show were amazing to admire and watch, no matter the subtitles. Afterwards, all cast members came to meet and pose with the audience with their hoofed companions. 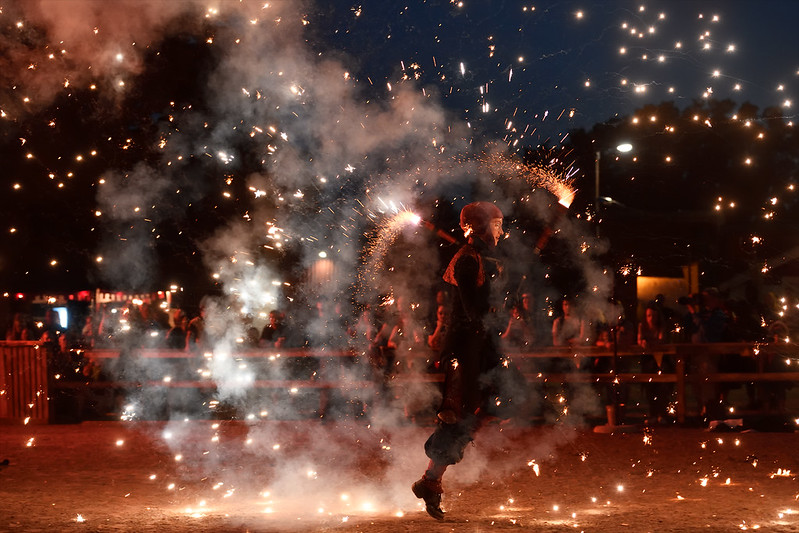 This festival captured my heart. Sometimes such events feel like a big fun party, but this felt like a different experience, a fairytale for adults. It definitely needs more attention and I wish it’ll get more visits each year. I hope to never miss this hidden gem of the medieval calendar ever again, in the middle of the European summer and with a program so unique compared to what is by now considered common, at least in the NL and Germany. Surely it would benefit from a costume parade or the best dressed contest, however the authenticity and attention to detail here at Häme I found most valuable. 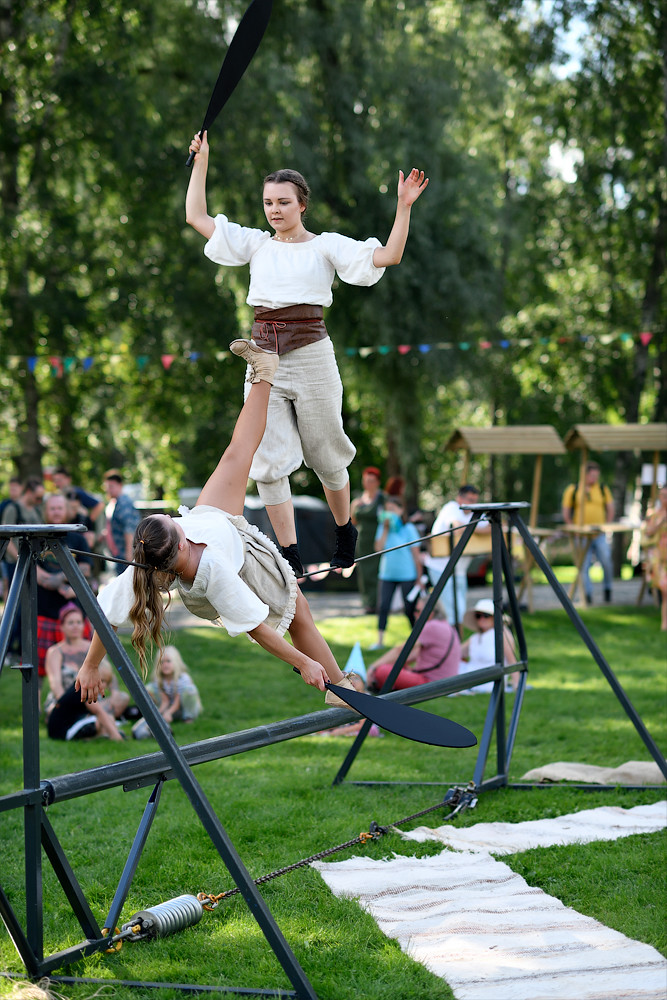 On our way out, after the show, we continued to walk through a fairytale. And I don’t how the organizational team manage to transform the ENTIRE festival grounds into this magical place. One of the main sponsors of the festival was a candle manufacturer, and so all the pathways were lined with glass candles, lit and flickering in the night. We followed them to find the way out, only to stumble into a portion of the festival where section of the tall trees and bushes were all dressed with flickering lights, candles and tiny LEDs to create something out of Cicely Mary Baker illustration. It invites you to look around, to step carefully for fear of running over a pixie or a gnome, looking out for the forest folk. And there it is, a creature in long flowing robes, stretching its arms towards you. And for its head and face it has an elk skull, with full set of gorgeous entwined antlers. It has black holes for its eyes, but you feel watched and called to it. You move as if in slow motion, to not disturb the fairy folk, yet wanting to catch every second of it and every sight of everything around. The path beneath you is all fogged up and its crawling slowly out further than your eyes can see and you are almost floating on it, transported instantly into this ethereal fairytale forest that you’d want to get lost in forever. In the air – smell of burnt wood from all the fresh food that’s been cooking all day long. In your ears – music and sounds from far out, from the late night bands still playing, in the distance. Magic is all around and you don’t want this night to end – approximately – ever.

Catching my ride back to reality was surreal and hard, and all I could think was, where have I been in the last hours or did I imagine it all?

Details about the festival and the 2020 program