Two concert reports in one in our “You got stalked” section, from Germany and Switzerland; hence you can find out whether two reporters in two different locations checking out the same tour will observe something differently – or not. Find the PHOTO GALLERY HERE. First on is:

Vampires from the North brought us “West End” and a tour. New albums come and go, but the look, the sound and the show with the same good old familiar formula of The 69 Eyes remain. I think we all have those bands that we go to not so much to hear the new stuff but to re-live those good old memories from our rock’n’roll past. The ageless Eyes are great for just that!

The support band Lacrimas Profundere came along on this tour, also adding another familiar feeling – the same two bands I once saw in a tiny local club in Karlsruhe in 2004. And even though I’ve seen them a few times since, this line up once again was special and personal to me. Though not without changes, as Lacrimas have since got a new leading man yet again. And what a man! Memorable – yes, full of energy – yes, great vocalist – yes, engaging performer – very big yes, compatible with the band – errhhmm… less of a yes. Julian Larre is a young singer with a band of his own (check out Finland-based LESSDMV) only recently having taken over from the previous singer Rob. The band’s latest release already features Julian on the vocals and makes a good impression. As promised, the overall heavier and deeper new album re-visits Lacrimas’ old Doomier sounds, so it was definitely intriguing to see the band live again and witness what the new singer could do.

This vocalist was born at the same time as the band, so clearly has a lot of energy and acts as if he is playing at an arena at least! Julian is very interactive with his audience and throughout the set maintained very good contact with the crowd at the full venue. At one point he even disappeared off the stage but was successfully found in the middle of the audience, much to the awe of the female attendants. He has very deep strong vocals and carries the mood of Lacrimas’ songs quite well. Whilst a captivating performer and physically impressive, his chewing gum in between made it visually unattractive. My personal highlight – a magical performance of “Ave End” that leaves your skin cold and shiverish. I think many of us at the concert missed the original version by original singer Christopher in all its Gothic perfection. 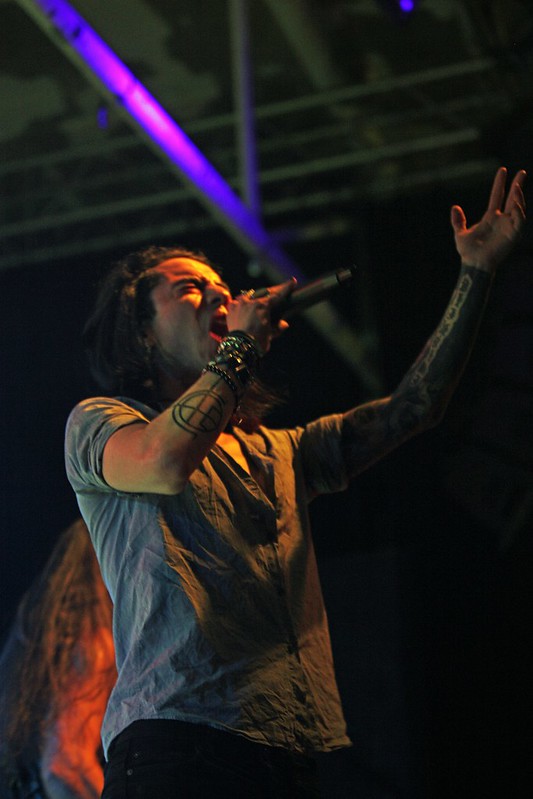 LP today is definitely more metal. However, I must say I am glad to see in which way this band is progressing and not turning towards more commercial sides of the darker genre, trying to win younger listeners. So generally, a very good concert with mostly newer material, with a few nods at the band’s past history. Still it left me with a conflicting impression: new energy meets the established band’s sound, is that a formula to keep Lacrimas band alive and naturally moving forward, or is that a recipe for a long term failure? Time will tell, but in general scope of things metal and dark, I do look forward to following Julian’s music career and how his performance style will develop.

After a bit of an random intro of Phantom of the Opera, The 69 Eyes took the stage and instantly you have this good fuzzy feeling that it is the same band you’ve loved since Paris Kills and some forever before that. Helsinki vampires, who celebrated their 30th anniversary this year and miraculously have not aged a day during their entire history, appeared in their now trademark skeleton leather attire and aviator shades. When in a song lyrics like “wearing leather” rhymes with “wanting to live forever” – you instantly know you’re at the lost boys Finnish rockers concert. 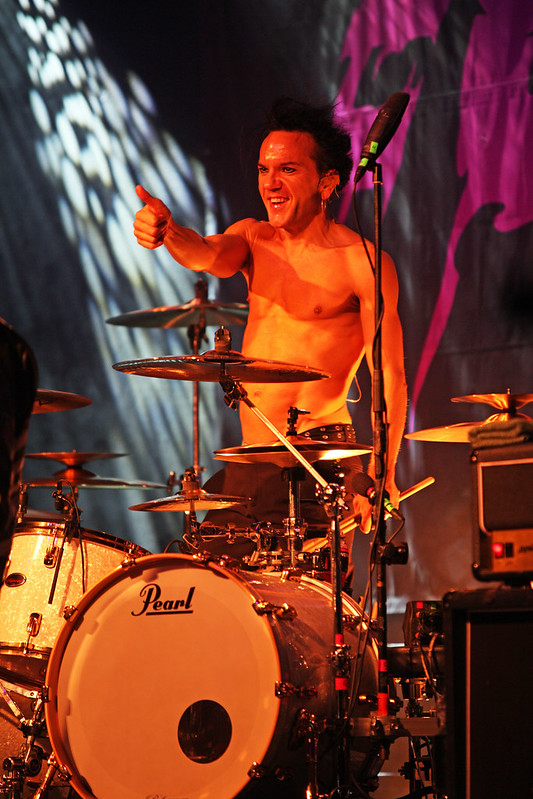 It’s funny how people often comment how they miss the band’s original authentic look/sound from back in the day, yet complain when the band is stuck in the past and does not evolve forward. Well, the Eyes are a good example how to please all… They are still the same as they were 15 years ago, sound-wise and looks are great too, the original line-up, ever so topless walking fitness ad Jussi69, very charismatic pale leader and his black-haired gang in matching leather, but yet there’s some hints of what’s new. You’ll keep wanting to come back to see what it is only to find it is the same good old-ever timeless Vampires and I just want to say: please never change. I miss Finland and I miss me at 22 living in Finland and every time I go see the 69 Eyes, I get that nostalgia well satisfied.

Jyrki69 is like a Gothic Elvis, embodies the spirit of Goth’n’Roll and makes us rock along with it. I don’t even care for the lyrics so much, it’s the music and the energy of the band’s live concert that is highly infectious. He is not to speak much, so he did not interact with the audience more outside of the set list. Neither did he ever remove his shades, but what does that matter for Lost Boys! He acts and performs and stays true to his every lyric and we love that.

That night we’ve heard a good mix of the newest released “West End”, well mixed with the previous records. However, nothing will ever beat Wasting the Dawn, Paris Kills and Blessed Be. No matter the epoch, these are the soundtrack to our best times and what will always be the base for a great 69 Eyes experience. We’ve only missed Gothic Girl, but for the rest – an excellent set for the vampires at heart.

Winter could have waited another day, but at higher altitudes the snow falls heavily and causes icy temperatures throughout the country. No problem for the gentlemen today at Z7, because the north men are used to the icy climate. 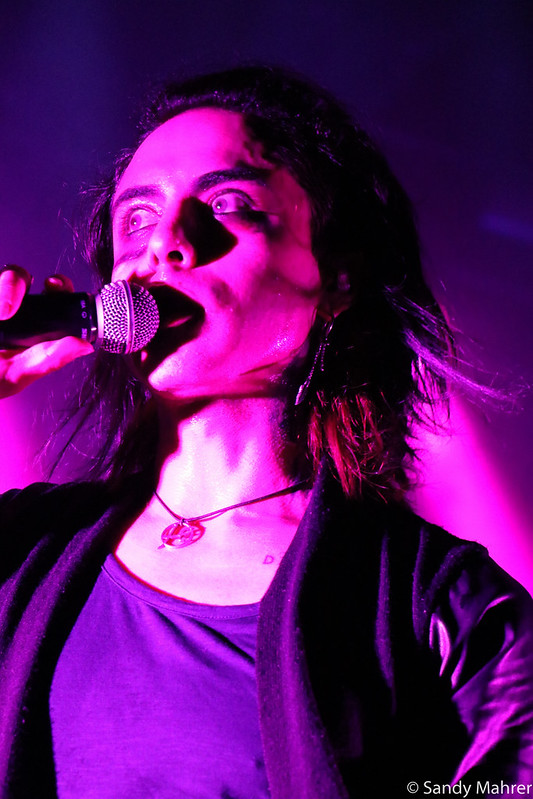 For a long time it wasn’t clear who the support act would be, but with Lacrima’s Profundere they are relying on a band that has already been on tour with the Eyes several times, albeit with different line-ups. The first time I saw the band together with the Eyes in Zurich was in the Dynamo Club, that should have been in 2005. At that time Oliver Schmid was the singer and also the other line up looked completely different, except for Niklas Schmid, who is now the last one from back then. Only last summer singer Roberto Vittaca left the band to give the microphone to Julian Larre. Ilker Ersin, known to some as a founding member of Freedom Call, is currently on bass and Dominik Scholz on drums. Musically, this year’s new album “Bleeding the Stars” is much heavier with much more growls and harder beats. The audience doesn’t really like the new stuff, but the old songs from 2005 make sure that nobody can stand still in the hall. Almost 15 years later I also have to say that “Ave End” is still the best album the band has ever released, even though “Antiadore” from 2013 was very close to this quality. Today the band with only four members is by no means boring to watch and listen to. Singer Larre provides powerful action on stage, because he can’t stand still for a second – he also falls over the microphone stand once which he just smiles away. He jumps on the barrier twice to be closer to the audience, which makes the girls in the front row very happy. For the last song, after almost one hour of playing time, he takes off his shirt – for me he wouldn’t have had to show his upper body. The show of those boys was good, but also a bit chaotic. 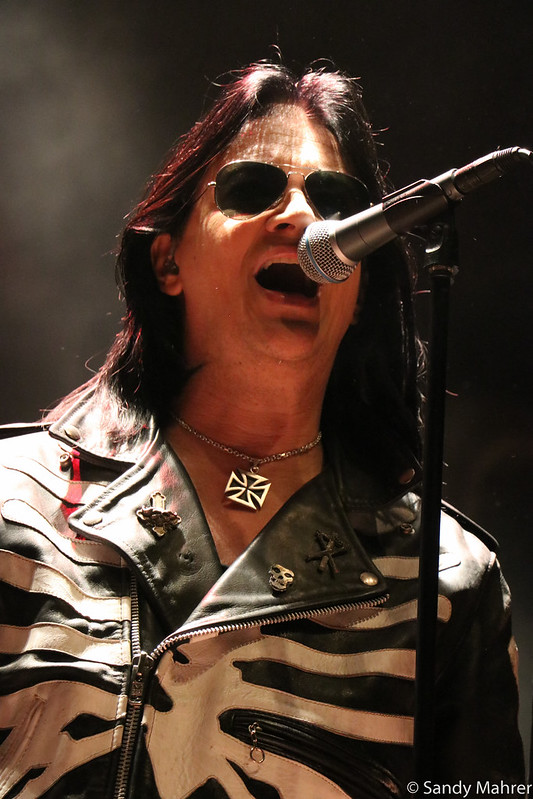 Lights off, spots on, and screeching in the front rows. Some girls seem to be more than just happy, because they have dressed up for their Hellsinki vampires. It’s funny, no matter how old Jyrki, Jussi and Co. will get, the girls who are after them stay quite young and could easily be the daughters of the now more mature gentlemen. At the last concert of The 69 Eyes I had already the impression that the gentlemen are a little bit restrained on stage and unfortunately that’s also the case this time. Even if they try very hard, they seem to be a bit distracted and just play the show. Compared to earlier there are more announcements from Jyrki, which I think is very good, because earlier he would hardly have spoken a word. Somehow the edge is missing a bit in the performance, even if the guys try to create a mood, and unfortunately the sound is also not optimal. Too bad, but the great music of the Finns can’t be affected by that.

The Helsinki Vampires celebrate their 25th stage anniversary this year. In addition their 13th studio album “West End” was released at the beginning of the year. Their setlist contains the new songs like “Black Orchid”, “Cheyenna” or “27 & Done” as well as the old classics where the audience just has to dance. Jyrki keeps inspiring the crowd to dance and sing along and he himself dances around the stage a bit himself. After 14 songs the Eyes leave the stage for the first time to return for four more songs, such as “Dance D’Amour” and as grand finale “Lost Boys” – what a great concert.