Well, all that water flooding Helsinki that day would have been desperately needed elsewhere on the globe, to stop the fires in the rain forest*. Quite ironic that we got perfect outdoor weather the day before and the day after – but as I know the Finns, they have this thing called Sisu (stubborn resiliance) and heavy rain that takes down Metro and partly also bus traffic should not impress them a lot.

As the bus ride took 4 x longer than usual, it was sheer luck and my timely departure that I made it to the Lost Society show. Finding out the hard way that taking photos in heavy rain does not make any sense – at some point neither me nor the camera lense sees anything any more. Kudos to the band that did everything to bring some sunshine and smiles to the faces underneath all those raincoats. And of course Kudos to all those fans cheering the band, no matter what.

My spirits were a bit down at that point as my precautions had turned out insufficient for this heavy rain (partly drenched hoodie, soaking wet raincoat) – and a bad surprise, no shelter for the press anywhere, so how to wipe the lens clean? Well, at least those with the VIP tickets got lotsa value for their money that day, in that huge beer tent near the stage… A big thanks to all those vendors that sheltered me a bit! Later I had no choice to do what other press people did – leaving the area to dry stuff and myself somewhere nearby that has a roof and some heating…

It got slightly better when Hardcore Superstar entered the stage to radiate some sunshine from the stage, with a lot of action and catchy Rock’n’Roll anthems, being cheered on by fans who did not mind that Lake Bodom had formed in the meantime right in front of the stage…  maybe I should mention again that there was not much of well-controlled photography, at some point either you or the lens are blinded by water drops. On the positive side, you get some interesting artistic shots, like the one here on the left as an example…

More photos in the interactive gallery below!

Around this event I had heard comments that Katatonia do not really fit the bill – well, on this day they were maybe the perfect fit to the overall nature atmosphere with their melancholic music. And they took it with some humor, too, singer Jonas got some extra cheers for his  “paska sää” – shit weather speech. Their setlist celebrating the 10-year-anniversary of their Night Is The New Day album surely made the fans happy. And the fact that the rain had finally stopped (well, almost).

A quick shower just minutes before the headliner, but then finally the fans could keep their focus on watering their bodies’ insides… Again, Kudos to all those fans, not only sticking it out but also keeping spirits high. Children Of Bodom gathered everybody present to the very front – all the benches in the back were completely deserted. Surely such best-of program made everybody happy,  Alexi Laiho & Co delivered great entertainment once again. Too bad that one of my personal all-time-faves was played when I was still in the photo pit… What to say, great gig concluding the COB summer tour, and in between the guys received a Golden Record for their latest output “Hexed”. I would have stayed until the very end, yet my clothes were still too damp to enjoy being outside … Anyway, summing up: great bands, shit weather.

* In case you too want to turn your anger and frustration about this reckless exploitation and destruction of rain forests into action, here a useful link 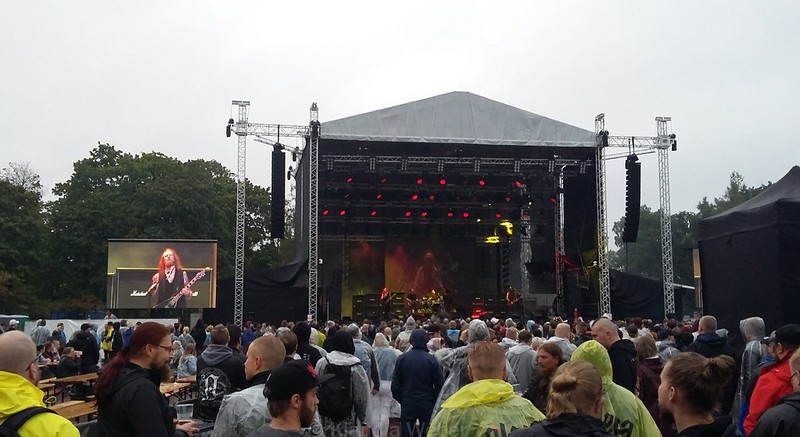