It’s easy to see that a party band is on tonight as the audience is pretty young. Although Alestorm seem to be playing at every summer festival, they draw a big crowd of about 1000 Metalheads, on a Monday. And people are in party mood already.

We photographers have our own life guard, as colleague Bastian Brocks of Tribe Online Magazine is wearing a red speedo and bright yellow Baywatch-style shirt which reads «Stagewatch». Naturally he is the target of jokes but also draws some audience attention, especially from females. He could easily have joined Alestorm on stage too with that outfit. Hence at this gig nobody of us had to worry about drowning in the pit when we have Brocks.

No danger of drowning with Aephanemer as their grooving Melodic Death Metal inspires the crowd. The French band enjoys playing at Z7 which singer Marion mentions more than once. And because so many people in the audience speak French too, she sometimes does not know which language to use. What is remarkable is the voice emerging from such a slight frame, which might surprise more people than myself. Her band colleagues Martin, Mickael and Lucie never cease to smile and use the full Z7 stage for their show. Aephanemer seem a bit insecure on this big stage but deliver a great sound and I hope to see them live again soon.
More photos below!

It does not take long until Alestorm are due and the mood in the audience is already in a high. People cheer about the yellow rubber duck, quite nicely fitting to our photo life guard tonight. This ultimate Pirate Metal Party Band never disappoints with their outfits or stage design and they do not take themselves too seriously. Moreover, their music is really good and also a lot of fun. This time it’s easy to see all band members as Keyboarder Elliot and Drummer Peter are put on a high pedestal. And there is a lot to see – Kilts, sandals, red yoga pants that barely cover, well, the crown jewels … a lot of action and a lot to laugh about. Singer Christopher keeps jumping and dancing Cancan in his Kilt, therefore you notice that he wears a quite un-Scottish boxer shorts underneath. A never-ending chain of crowd surfers keep the security busy and there’s a fantastic party mood until the very end. Even though Alestorm can be watched at so many festivals, it is nice to watch a full-scale club show of those guys. 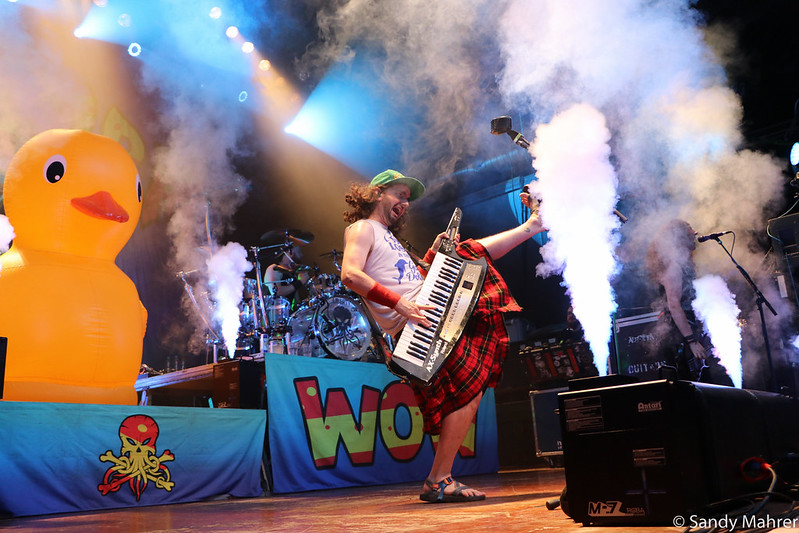