Another month gone by and it’s festival season – and heat season with 30+ degrees every day in Switzerland, today even 36 degrees. Not a good day to spend with 1600 more people in a concert hall, but luckily Z7 is a storage building with huge doors that keep some air flow. Still many sweat a lot even before the concert starts.

First on are Dreamshade from Lugano, a big honor for this young Swiss band, existing since 2006 and dedicated to Alternative Metal, hard sound with clean and growl vocals. Despite the heat they give it all, yet fist a tech glitch “swallows” the clean parts of singer Kevin Cali, but the problem is fixed quickly. Still I sometimes suspect there is some support via tape, although the growls are supported by the two guitarists. Anyway, the band gets the party started, but calling for a mosh pit is way too much to ask from an audience at such temperatures, a band should know that.

During the change over people outside notice a black smoke cloud nearby, obviously caused by a fire, but Z7 as such is not affected. The first notes of Motörhead’s «Ace of Spades» announce the begin of the Arch Enemy show, starting earlier at 20.30h because the band wants to make it to their next gig in Bordeaux, France. Admittedly it’s my first time since Alissa White-Gluz has replaced Angela Gossow, and there are differences. Alissa is much more Show Girl, there is an obvious concept behind her outfit, make-up and hair style and I like her energy and her charisma. What I miss a bit is the audience interaction that Angela always delivered, but it might be caused this evening by the band’s tight schedule. The hall is literally boiling over and respect for the musicians to keep performing in their long-sleeved or leather outfits. Some ventilators on stage give some relief to the musicians, for the audience there is the occasional water hose – maybe they should be more careful when hitting the photographers with it – and also free water bottles. Still several people require medical help, but luckily not so many. During the awesome Arch Enemy show you notice a whiff of burning plastic and glue in Z7, well, better than sweat – and inside humidity is 99%. After I got half-hit by the hose, my soaking wet clothes do not dry despite the heat. Whatever the circumstances, Arch Enemy convinced fully and I have to admit that I’d gladly watch the band in this line-up again.

After the show a bad surprise for those who arrived by train – because of this huge fire, the Pratteln station is closed and they have to get to another railway station. Might be a hassle, but I’d say this concert was worth the trouble. 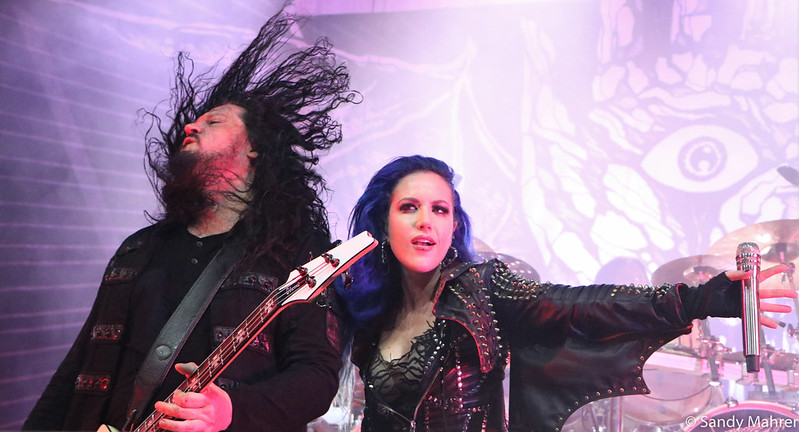