Eurosonic Noorderslag is Europe’s largest showcase festival. During the four-day festival, around 300 bands perform in Groningen every year. Noorderslag focuses on Dutch artists and takes place on Saturday. Eurosonic lasts Wednesday to Friday and features artists from all European countries, focusing on a different country every year. Eurosonic took place for the 19th time this year with a focus on Iceland.

Bands played in venues of different sizes all over the city, so it took some planning to get to each venue in time for specific bands. There was a free program in the afternoon and on the outdoor stages, as well as the regular program that could only be accessed via ticket. I participated for one evening only, seeing Performance Artists Dakh Daughters from Ukraine, Rockers Carnival Kids from Norway and from Icleand Modern Rock from Fufanu, Electro Pop from Young Karin as well as Chamber Pop from Árstíðir.

Dakh Daughers played at the Stadtshouwburg, an old theater perfectly suited for them. Their show was an interesting mixture of concert and performance art, complete with face paint and several costumes. The band consists of seven women, playing a total of 15 different instruments from strings to didgeridoo. Dakh Daughters are already known in Ukraine and had set out to conquer Europe now, bringing stories in different languages underlined by music and different roles they play on stage. Their songs were a mix of elements from different genres, building collages of sounds. Personally I found their performance more fascinating than the music, but the sum of both made it an entertaining concert.

Fufanu were next on my list. On the way to their concert I quickly checked in on Orla Cartland. The Irish Singer/Songwriter played some lovely pop songs on guitar while I was there. When she brought out the band, I had to leave to make it to the next venue on time, but I really enjoyed what I heard. She’s now on my list of acts to check out in more detail. Anyway, Fufanu delivered an entertaining show, somewhere between Rock and Punk with lots of action and interaction among the band and with the audience. They were fun to watch, the music very listenable and time went by quickly. Each band member was much into the music, playing and singing well. They are definitely a good live band.

I moved on to the Newscafe for Young Karin, whom I had heard much about. Unfortunately not so many people had come to see them and those who were there kept a respectful distance to the stage until they asked us to come forward. The music was well worth hearing – cool electro pop, performed by cool people. There was not so much happening in terms of a show, i.e. getting the audience involved or moving around much. It would not have fit their music, though. I liked their sound, it was fresh and enjoyable and each of the members looked rather immersed in their music. It was lovely Pop music with a touch of Electro in surprising variety. This is a band worth checking out.

Seeing Árstíðir at a church is always a special treat. These buildings are just made for their sound. Thus, I was happy to know they were performing at the AA-Kerk. Their intricate melodies worked perfectly at the venue and soon they had captivated the entire audience. People were watching in awe and listening intently. The band delivered a strong set with mostly songs from their upcoming album Hvel. Especially the more dramatic pieces were well received, but people seemed drawn in by every single song and cheered them on after each one. It was a good, energetic performance that didn’t leave much to wish for.

Carnival Kids were the last band of the night for me. They delivered a powerful rock performance, which was a bit heavier than I had expected, but really good. The venue was packed with people just watching or moving to the music. I loved their sound and their power, enjoyed the performance. Their music was pretty straightforward with a nice edge to it. They brought amazing energy to the room and kept it there, entertaining the audience. Their debut album will come out later this year – something any rock fan might want to check out.

Overall the festival was well organized and offered many possibilities to see bands from different genres. Made more for the music industry than for the fans, it still provides ample opportunity for everyone to find what they are looking for. The selection of venue was good too and seemed fitting for the bands that played there. For those willing to stay up, the music continued all night. 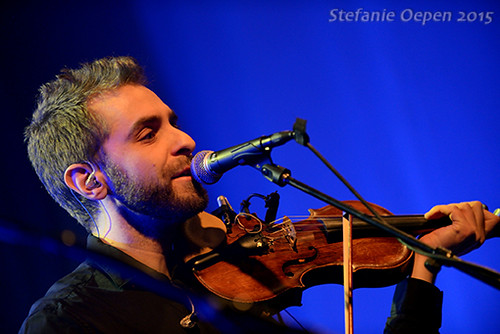 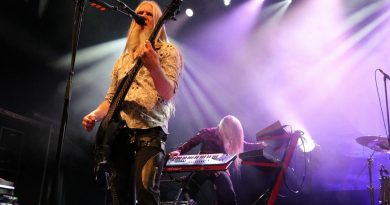