The International Day of Work at Z7 features the music of Iron Maiden, played by the most popular cover bands The Iron Maidens. And for about 500 people it’s not MiniZ7, as I feared beforehand, but the big hall.

The support act Reds’cool, is a band from Russia. Their Classic Hard Rock starts well but towards the end they seem a bit tired. Basically their singer is Slava Spark but on this evening there is another singer on stage. He is doing a good job in the beginning, quite enthusiastic but begins to slack later. Maybe because the audience is not as inspired as expected, and their songs could have had more ear candy quality to warm up for the Maidens.

After a short break the female version of Iron Maiden – or better, literally The Iron Maidens – enter the stage. Those California Girls open with «Invaders», and some males in the audience might be disappointed that the dress code is rather civil. The girls focus on the music, which is quite good but maybe I expected too much because of the hype. Neither the show nor the music offered something exceptional. There are costumes and flags, but it seems that the girls do not quite know how to handle all that. Compared with the pretty cheap show elements of e.g. Steel Panther, when not using the full potential of show elements, they could have left them out completely as well. And it’s not good that the girls seem to play just for themselves and hardly interact with each other on stage. Only drummer Linda McDonald is fun to watch as she seems to have a lot of fun as well. Although they play some songs you can hardly ever hear performed live by the originals any more, and they also play the usual hits, the sparks don’t really fly. This is why I decide to leave a bit earlier. A pity, because I think with a few adjustments and improvements they could make much more of their show and get the audience in party mood.

Below the interactive gallery with a selection of photos – or click on an image and enjoy all concert photos in full size via Flickr! 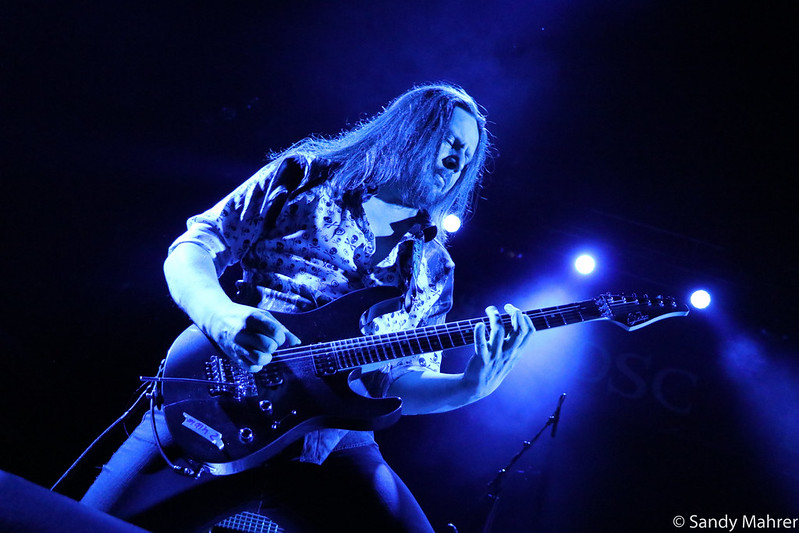 Fields of the Nephilim / Murheenlaakso