Interactive photo gallery at the bottom  – This evening promised an intense experience just with its top-notch line-up. As STALKER has praised those bands many times before (e.g. Findustry events) and as also this concert left nothing to wish for, it´s mainly the photos that should do the talking. See gallery below

Actually, there was something to wish for: the opening act of this evening, Khroma , would have deserved more audience for their fantastic conclusion of the tour.

Yet it is understandable that people preferred a drink on a terrace to hanging out in a hot club in those temperatures (seemingly +40 Celsius).

When The Physicists played, more people showed up,
and Iiwanajulma as well as Bob Malmström (start photo) gathered most of the crowd in front of the stage, where even some moshing took place.

The headliners KYPCK got the party into full swing. Great gig and a wonderful chaos on stage during the final song, when everybody who was part of this Babel-Tour joined the band on stage – some even in such a hurry that they forgot their clothes backstage…
Hopefully this event will be continued…
photos: K. Weber 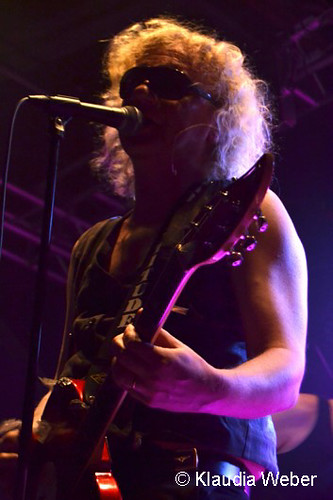