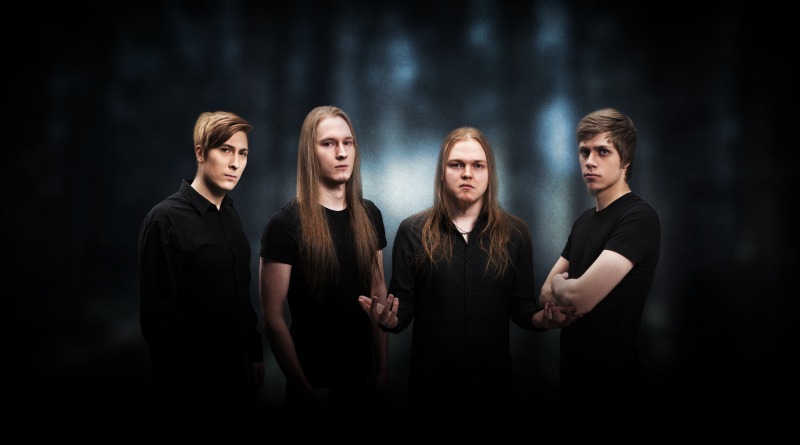 Hello guys, how are you doing? Thank you for your time. First of all, please introduce the band: Where are you from and who are the members?

Fine, thank you! We are Foredoomed from Joensuu, Finland. We are a melodic death metal band with four members:

How would you describe the music that you are playing?

Melodic Death Metal and we combine clean and growl vocals. Some people have said we sound like a combination of Children of Bodom, Wintersun, Opeth, Amorphis, etc. – Eetu

Why did you choose the name Foredoomed? Is that a helpful name for a band?

Interviewers like to ask this question a lot. The name came up in 2009 but cannot really remember the reason behind it. I think it is a cool sounding word and has nice symbolism in it. – Atte

You have been together since 2009, right? Could you tell us a bit more about the band’s history? How did you meet each other etc.?

The name came up in 2009 while we were in school (around age 15). Me and Asmo were in the original lineup along with a couple of school friends. We did our first demo during that time, but after that the band kind of broke up. In 2013 we did another demo (me and Asmo alone) which helped us get more band members. With complete lineup we did our 2015 Search for Tomorrow-demo EP. However, in 2016 for one reason and another we were pretty much in the same situation as earlier; just me and Asmo alone. During that time, we started working on our debut full album (which became ‘Ordeal’). During 2017 Eetu and Joel joined in our band, and we eventually released the album in August. – Atte

In August 2017 you released your first record, did you produce the whole record on your own or did you have the help of a record label?

We did ‘Ordeal’ mostly on our own. We were in a band coaching program called Joensuu Rock Academy in 2015-2017 which helped us do the album. We had producing help from people like Erno Sallinen and Mikko von Hertzen. – Atte

How is the song writing process working in the band? Do you write everything together or just one of you alone?

I actually do most of the songwriting. I create the structure of the song, and then we push it together the last 10%, which is a very important phase. – Atte

Your album is called “ORDEAL”, was the album recoding process so horrible or why did you name the album like this?

A lot of things happened in my life during 2016. We had only me and Asmo in band as we couldn’t find anyone to join at that time. Not many people believed in us as we tried to make a full album instead of something smaller. I had a lot of motivation problems. I just had to push forward and not to think too much about anything. Finishing the album is the greatest feat I have accomplished in my life. – Atte

Which song are you most proud of?

The whole album. The process was so hard but it really paid off in the end. People really liked what we did and ordered a lot of CDs. I am really proud of our accomplishment. – Atte

We have catchy melodies and our sound is something that others haven’t done. Also, people like the progressive elements in our music. – Eetu

You are hailing from Joensuu, Finland – is there something special you would like to recommend to our readers which they should go and see when they are in Joensuu?

Joensuu is a very beautiful and down-to-earth city. There are many growing bands in Joensuu, and there are few stages where bands are allowed to play. Kerubi is the most popular venue here in Joensuu. We have one of the biggest rock festival on the Finnish scale called Ilosaarirock. The festival will be held on second weekend in July. If you are visiting Joensuu in summer, we recommend going to Ilosaarirock. – Eetu

Which band would you totally enjoy touring with?

Ensiferum would be nice to tour with because they are great guys and they have a good atmosphere. – Eetu

What do you want to reach with your band?

We definitely want to reach the international stages because this is just one thing that we want to do in our lives. We have a lot of things that we must to do before that and we are ready to do everything to reach our goals. – Eetu

Where can people see you live the next time? Do you have plans for new gigs?

We will be playing a gig in Bar Loose in 5th of April. So, if you’re near Helsinki that time, check us out! – Atte

Thank you very much for your time and all the best for the future!

Teräsbetoni / J. Ahola: “Music is mostly doing – it’s not too much thinking”

Turisas: No Need for Lucky Underwear