Only in February Inglorious have played at Z7, as support of The Winery Dogs, and tonight they are headlining, yet it’s the smaller format named MiniZ7 on a smaller stage. As the Up in Smoke Festival will begin the following day, there is a small stage in a tent outside, maybe a bit chilly for September but the slight slope gives excellent view to the stage from every angle.
Warming up on this Thursday evening are Swiss Jack Slamer with their psychedelic Rock. Unfortunately they don’t have enough room on stage to express themselves, especially bad for an active singer who enjoys to rotate his rastas. However, the band makes the best of the situation and deliver a solid show, with music straight from the 70s and channeling this era. It’s definitely worth to check out this band again on a bigger stage.

After a short changeover the headliners are on: Inglorious are touring as support with Steel Panther and use their day-off for this headline show in Switzerland, luckily, because I would not go to watch Steel Panther, no matter who supports them. Unfortunately not so many people showed up, a crowd of 50 creates a quite intimate atmosphere. Still Inglorious give it all and inspire the audience, and the crowd returns it with giving it all to welcome the band. Besides songs from their debut album, Inglorious also present 2 new songs that prove you can be looking forward to the second album. And naturally they also deliver covers, sung with a passion by Nathan James, «I surrender» by Rainbow and «Fool for your loving» by Whitesnake. As a special treat we also get Def Lepard’s «Animal» sung by the guitarists Wil Taylor and Andreas Eriksson, and in my opinion Wil rules and should sing more often. Obviously those guys had a lot of fun and inspired their audience, James is a born front man, convincing with moves and voice and he knows how to handle an audience. In the middle of the show they provide a special surprise for a fan, and little Dalila receives a birthday serenade by both the band and the audience. What a treat, anything but common place; as well as handing out photos and autographs after the show. Inglorious are indeed a fantastic live act with a lot of charme and charisma, and they are always worth to be checked out.

Full size photos at Flickr, or check out the interactive gallery below!
(photos: Sandy Mahrer) 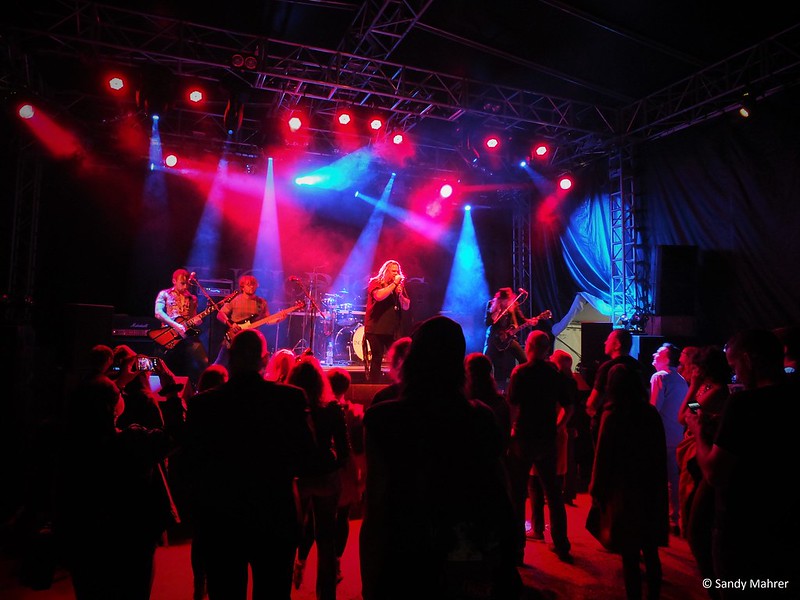