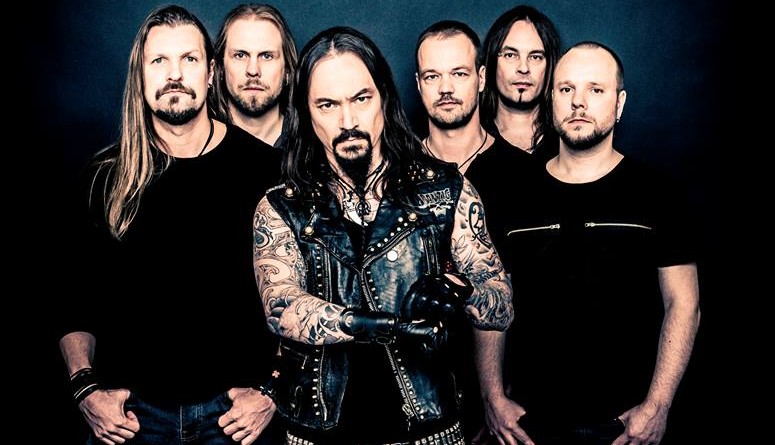 For nearly two decades Amorphis has been one of the most popular and successful Finnish metal bands. Their latest offering shows the band maybe stronger than ever: full of energy and dynamics, yet very melodic and melancholic – in other words, all of Amorphis’ trademarks are in place. With frontman Tomi, we spoke about the new CD, video clips, tour plans, books and strange questions.

Congratulations on the latest Amorphis album Under The Red Cloud! Can you tell us a bit about the recording, what challenges did you encounter and which of the new songs was the most difficult to record from a technical point of view?

Tomi: I didn’t have any major problems. Of course when you’re making an album there are some sort of difficult situations. Of course it is hard work but I can’t remember any major problems. Recording was cool and smooth in a way because we did the pre-production well so everything was quite completed when we started to record the album. The biggest challenge was working with the new producer for the first time. That’s always like, you don’t know what to expect from the new guy. But he was really friendly and a nice guy, so after a few days we started to trust him and got to know him, and all went smoothly.

Over the years, has it been getting easier or harder to write new songs?

Tomi: I think it depends. Mostly it depends on the songs. And we have had the same line-up for 10 years now, so it’s quite comfortable. It depends, but it’s easy when everyone’s really motivated. And we do this for a living, so every time we record something we have to concentrate on the recording and on practicing the songs, rehearsing stuff. I think the biggest problem is picking the songs but for us it’s not such a big issue. We have many writers in the band, so every time we start new things, we have lots of material to choose from. 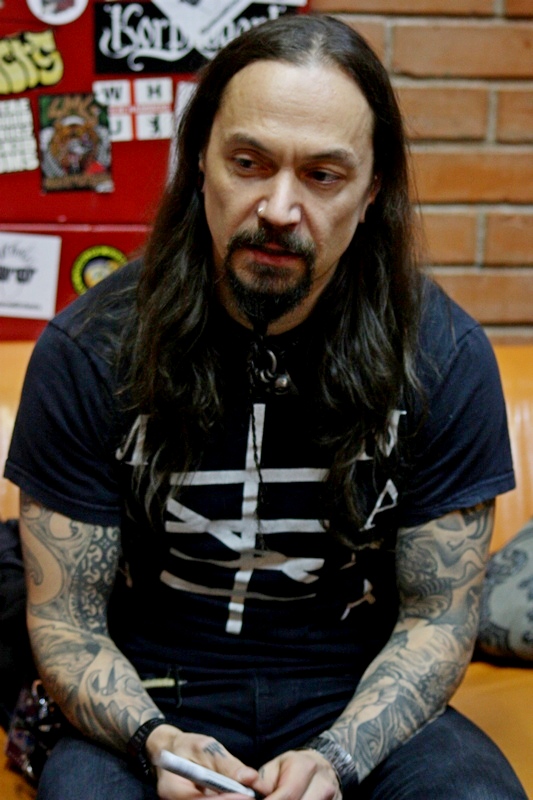 The new album comes across as very complete. What’s your secret? Are you creating the lyrics for your songs first, or the melody?

Tomi: We just have rough demos. Esa Holopainen is composing lots of things. I think he just records something with his computer, like doing some guitar riffs, melodies and stuff, and nowadays if you know how to do it, it’s really easy. So you can do demos at home. It’s simple, and then you can send it by email to everybody so we can have some picture of the song. And that’s how we work, we just send some ideas and then we come together, rehearse and play, practice and jam. It doesn’t matter who composes the songs. We are really open for all ideas. And we try to have a great democracy about it all. It’s always fun to start recording a new album, and it’s really interesting to hear the new ideas and new songs. And just working with the guys is always fantastic.

The new material and the video is very emotional. It is true that you integrated some band member’s children into several songs?

Tomi: I don’t think so. I don’t remember anything like this.

We have heard that you are releasing a book in Germany. Could tell us what the fans will find inside it?

Tomi: Yeah, we released the book last year in Finland and it has now been translated into German. It was written by a Finnish guy who worked on it for 3 years or so. There are many pictures from magazines and interviews and stuff like that from the whole history of Amorphis. He’s a reporter for couple of Finnish rock magazines and this was his first book. He tells the story of the band all the way from the early 90s. He wanted to concentrate on early years, but there are also stories about the Pasi Koskinen era and every album [up to the present]. I think it’s a great book and not just some tabloid release. It contains a lot of information for fans who want to dig a little bit deeper.

Amorphis did a video for “Death Of A King”, can you tell us a bit about that clip? Where it was shot and who directed it?

Tomi: We shot it in Finland, and the guy who was filming it wanted to have a lot of pictures of nature, because we have a lot of lines about nature on the album. It was a really beautiful day. We shot it in one day in Hämeenlinna, which is a small town in Finland. And just beautiful images of nature. It was really fun. Actually it was near a military area and the last scenes with the coffin burning were shot inside the military area.

And will there be any more videos from Under The Red Cloud?

Tomi: Yeah, there’s gonna be more. I think there’s already a new one [“The Four Wise Ones”]. We recorded it on the last European tour, so it’s more like a “live on the road” video, kind of. I think it’s not the best music video ever done, but it’s okay. 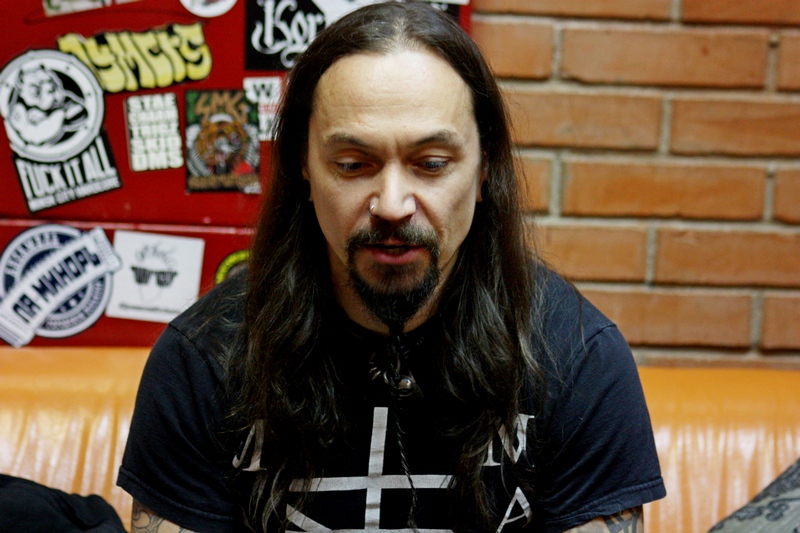 Do you think that video is an important tool to use in trying to gain new fans for Amorphis?

Tomi: I must say it’s really hard to do a great video. It’s really hard to be completely satisfied with it. It’s easier when you have some great ideas and vision, but it’s always a challenge and we’re a bit pessimistic every time we start a new video. I don’t know, it would be nice to do something like a short film, but it takes a lot of effort and a lot of money. I’d like to do that, though, I think it would be great. When I was younger, I liked to watch music videos. It’s really interesting to see the bands playing. I think it’s a great way to promote a band, and these days were people are watching them on the internet, it’s an even more powerful way of promoting the band than it was in 90s.
In Finland there are not many tv channels that are showing music videos nowadays. We used to have one really famous music show in the 90s and I watched it a lot when I was younger, but nowadays we don’t have any. Even MTV – “Music Television…” – is mostly reality shows and no music at all. It’s really boring. But it’s cool that you can watch great quality music videos on the internet.

Do you listen to your previous albums?

Tomi: Not that much. I’m listening to the albums on which I’m not singing. I just don’t like my own voice and I just don’t want to watch live videos. I often hate it. I don’t know why, maybe it’s a singer’s problem, but I hate it. Like for example, when we’re backstage at a show and someone picks a song on YouTube from a show of couple of days ago, I’m like “oh fuck, stop it!” I’m not bored with the albums, but you know, there is so much great music on the internet and everywhere, so I prefer to listen to something else.

Talking about something else, what was the last album you have purchased? What did you like about it?

Tomi: Oh, I’m not buying that many CDs anymore, which is stupid. But let’s see what I’ve been listening to… Morbid Vömit, they’re a death metal band from Finland. And also Lasten Hautausmaa. They’re also Finnish, how to describe it… depressing rock, or something like that. What else?

Please name a book, a film or a song that you think everyone should know?

Tomi: I think he’s from Denmark, Lars von Trier. I like his films. They’re really sad and not like Hollywood movies. I like dramas; I hate comedies because usually they’re, like, really bad. True comedies are great, but usually they’re just boring. Like stupid jokes and stuff. I like City of God; of course Quentin Tarantino movies are great. I like really sad films, nothing like romantic comedies. I don’t like action movies either, they’re like comedies. But I liked that drumming movie, Whiplash. That’s a great movie.
About books – I don’t read that much. Of course [Mario Puzo’s] The Godfather is great. I read mostly Finnish writers, and I like Swedish crime novels. 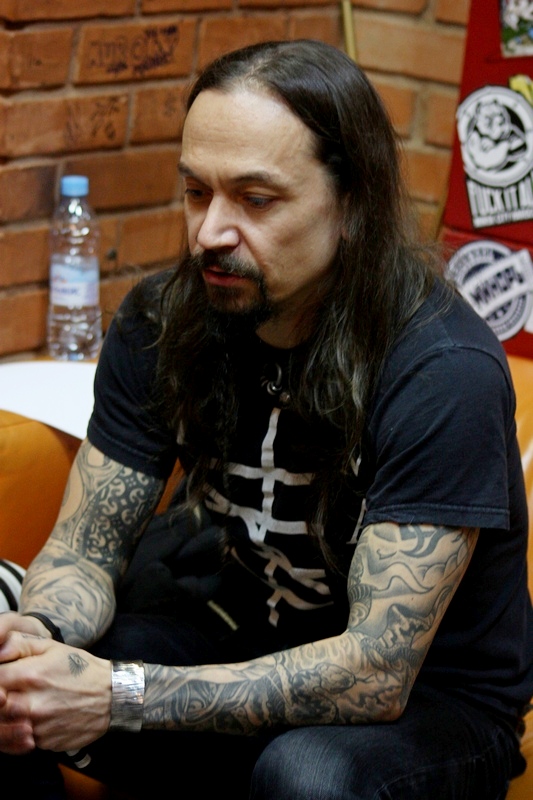 Time for a strange question: If you had the opportunity to change your gender and for a single day become a woman, would you risk that and what would you try out in a new image for yourself?

And the last question: what question don’t you like to answer, but are usually asked anyway?

Tomi: Of course it is usually about the latest album or touring or why I cut my dreads. Well of course, when you’re a singer and you are doing an interview, you have to talk about the band and I understand it. It’s part of the business and it’s not the problem for me. There are some funny questions, some typical ones, there are too philosophic questions also. But mostly it’s just fun!

Good, then thank you for the interview!

Six Inch: A handsome synth player is a plus 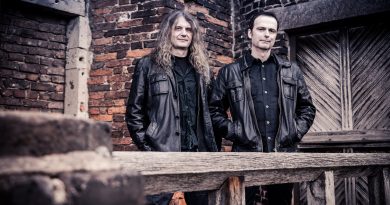 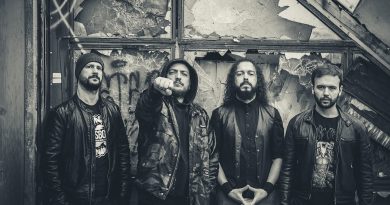