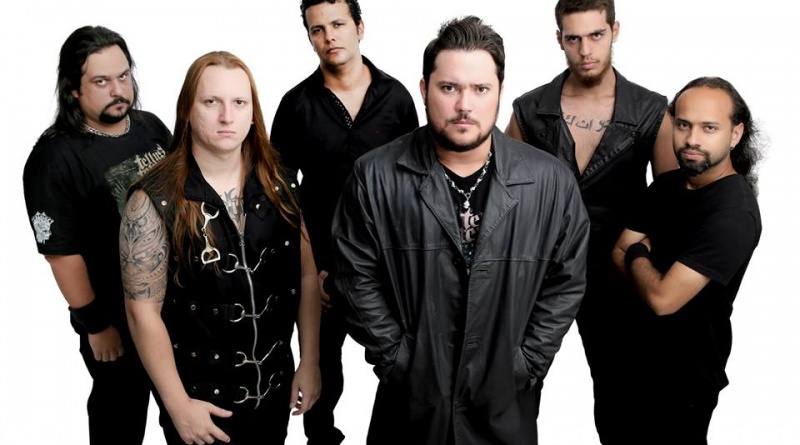 Well, I assume that we all know this ONE band from Brazil that impressed us by seeking their Roots, Bloody Roots, but naturally there are many more remarkable acts to be found in this country – for example this one. Vocalist Felipe Borges tells us everything we need to know about Tellus Terror and their debut album.

Who are you – can you introduce yourself and all of the band members? What are you doing when you are not making music?

Hello everybody from Stalker, my name is Felipe Borges, and I am the singer for the band Tellus Terror (Brazil). Our band is formed by the following members:

How did you meet each other? When and why did you form this band?

I know Ramon from 12 years by now, and we have played together when we were toddlers. Arthur and I, we have played in a Black Metal band called Impacto Profano 7 years ago. Wederson was invited by Arthur to join Tellus Terror, so I know Wederson for 2 years by now. Ali Ghazzaoni was also invited by Arthur to join the band one year ago and Nelson was invited to join Tellus Terror by Ramon 6 months ago, but I have met him during the drum recording sessions of EZ Life DV8 Album at VISOM Studio, so I know him 11 months by now.

I have formed this band when 2 ex-members did invite me to create a band and play together, so I had the idea of creating Tellus Terror (Tellus means Planet Earth in Latin Language), in which I could write about common things to every Human Being. Also in addition I have created for ourselves the style M.M.S. (Mixed Metal Styles), to make possible that we do use everything in the Metal world within our music.

Why did you start making music in first place, what was the inspiration for learning to play an instrument / start singing?

Music is one of the best links that Humanity can have in our entire world. Music connects people, music unifies the masses, Music dig up our feelings and allow us to fly away from reality and heal our internal wounds. We just wanted to be part of this fantastic thing called music. The inspirations are the people themselves, we do music for them, and when we do see people enjoying our music, it makes us know that we are doing something good to them.

We do play M.M.S. (Mixed Metal Styles), a style that I did create for ourselves in order to allow us to use every metal genre that we actually do have (Death, Black, Doom, Gothic, Thrash, Heavy, Power, Grindcore etc…. We all listen to everything inside the Rock an Roll and Metal world, from AC/DC to Benediction, from Rolling Stones to Marduk, from Jeff Beck to Septic Flesh, from Judas Priest to Haemorrage, from The exploited to Beherit, from The offspring (old) to Cradle Of Filth, from Sonic Youth to Iron Maiden and so on…

In which bands have you played before?

I have been part of Infernal Blasphemy, Impacto Profano, Litania, Godemise and Lilith Embrace. They were all good bands, but life brings changes in everyone´s lives so…

In Tellus Terror the whole band compose the albums, and the lyrics I write them.

We are against all types of racism etc… for us, we are all the same, and we need to give more value to Human Being. We do not have religions nor we do have anything against it. Also we are not in favor of sexual orientations racism and we are also neutral to politics.

Our inspiration is basically everything that is common to everybody independently if they are rich, poor, white or black, tall or short etc… We are all the same.

Tellus means Planet Earth in Lating language, and Tellus Terror reflects all of our worst fears and sufferings that we do live, once we are living in this same home called Tellus.

Our goals are based in travelling to know a lot of different people and cultures, play in tons of shows, we dream of releasing lots of albums, and have the certainty that our Metal scene is getting stronger everyday. We want to be part of this effort to make our Metal scene bigger and bigger.

You have just released your debut CD Ez Life Dv8 – can you tell us all about it? What can fans expect, how was the recording, where and with whom, how long did it take, are you satisfied with the result?

All about what the fans can expect is a mix of brutality with melodic passages, with many zests of all Metal Styles, surrounded by a conceptual atmosphere about how life was created as we know, how our planet was formed, what we are doing with our planet, how the Panorama of the end of the time would look like and the final idea about everything that we could possibly imagine about how the world would end is an error

We took 3 months to have it 100% ready out of the oven!! The final result is killer, we would not change anything.

That is for sure. The record Labels (The good ones), they do have a very strong network in the Metal market to disclose a band and distribute their CDs in the whole world. This is what every band needs. Until this moment does not come, we are still working our fingers to the bones doing the things in our own way. As an example, we did use Fredrik Nordstrom studio at Sweden to do the Mix and Mastering of our album, and Seth Siro Anton to do the whole album cover and artworks. We do not plan to low down the quality, we will always seek to work with the best.

What should an ideal record company for you be like, and do for you?

Widely spread the word would be one of the key things for mutual success. It is necessary to compose great songs, with great quality etc… but if you do not have a very good press release, distribution and strong propagandas, you can be sure that you are drowning your work.

What are your live shows like? What´s the perfect venue/show for you?

Our live shows are the opportunity to see the fans, see the people, and be close to them. The perfect venue would be anyone that have a good equipment, good space (we use a lot of space at stage, our drum is big, our keyboarder uses 3 keyboards etc…), but in the end, we will do anything possible to give our blood to the fans and for the sake of the show. We are a dedicated to the fans band.

Do you have a weird /absurd story to tell, e.g. about mishaps at a gig/tour?

We have a few, but one of the most funny story is that we were in a bus going for a show together with BEHEMOTH at São Paulo here in Brazil, and our Bus driver was slower than a Fuck*#% turtle LOL and suddenly we have spotted a nun driving all dressed up in those Nun dresses driving in a small car going faster than the goddam bus, we were all laughing and pointing to the nun, and she stared at us and waved her hand saying bye to us and the nun surpassed the bus. Our roadies were all drunken already so we all could not stop laughing.

There are lots of bands that I could point out, but if I could choose, that would be Septic Flesh, due the fact that I love their work, and the fact that I like Seth Siro Anton, he is a very nice guy!

Can you tell us a bit about the Rock / Metal scene in your home country – what is it like, what has changed since the “big boom” when all the big stars (Iron Maiden, Metallica etc) played stadium gigs in front of those incredibly huge and enthusiastic crowds etc?

Here in Brazil, the big shows are for the big bands such as Iron Maiden, Metallica etc…, In Brazil the people only buy what they see on TV, but the Metal Heads (which are the minority here unfortunately) they go to underground shows normally. We love our country, and we wish that Brazil changes soon, and put up more and more shows with extreme metal bands, so maybe the majority of the people will stick to it here.

We are right now composing the new album, and it will be killer! Also we are getting close to shot our first video clip!! But meanwhile I have opened a Record Label (Tellus Records) focused to release well know bands albums here in Brazil through licensing, and so far we did agreements with Century Media (Marduk, Triptykon, Suicide Silence and dr. Living Dead) and with Napalm Records (Moonspell). I am also finalizing the construction of a very good studio to attend the Metal bands here in Brazil called Tellus Studio, with a very good structure. In this Studio Tellus Terror will rehearse and also record a lot of materials too. 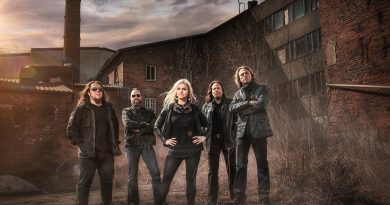 Aeon Zen: Having fun is the priority 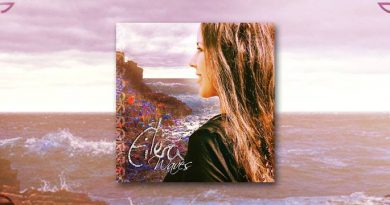 Eilera: “I listen to my instincts”