Again STALKER managed to follow a band, in this case a whole band package, through Europe. Here you can find out how the Finns pulled off their shows in Switzerland, Germany and on their home grounds …

SWITZERLAND: An evening with some of the best Metal bands from the North, could it be any better? Some hours to spend dreaming of endless woods, beautiful lakes, mystical stories and legends, and listening to this incredibly beautiful melancholy from Finland. And you can hear all that in Finnish music.

Insomnium
Singer Niilo Sevänen welcomes Swiss fans, yet not in Finnish but German, which is much appreciated. The guys don´t have to struggle much tonight, because all the people are really into partying tonight. It´s only the second time the band visited Switzerland, despite their long history.

The setlist is focused on songs from their new album „Above the weeping world“. You can hear that Niilo is a fan of Sentenced, in particular of ex-singer Taneli Jarva, and it´s also obvious in his performance. The rough and dirty voice and the powerful sound is quite appealing, but unfortunately the gig ends after only 30 min.

Swallow the Sun
Bands like this add new meaning and emotional depth to words like „melancholy“ and „sadness“. It´s incredible how you could write those lyrics and still haven´t committed suicide.

But songwriter Juha and his crew appear quite cheerful, as the audience sings along with almost every song. Naturally the young Finns play their superhits „Dont fall a Sleep”, „Hope“ and „Too Cold for Tears“ from their recent album. Unfortunately they are bothered with some technical problems throughout the show, but that doesn´t influence the quality of their performance – simply so beautiful you could just cry.

Amorphis
Finally the Finnish Kalevala gods enter stage. As mystical as those stories is singer Tomi Joutsen, in top-condition and exciting from the very first moment. His long rastas – reaching the end of his back – are rotating all the time, and his band colleagues have problems to be noticed, as Tomi attracts all the attention. No wonder, he is such a charming and charismatic singer.

„Perkele the god of thunder“, „House of Sleep“ and the new, incredibly beautiful „Silent Waters“ are naturally part of their setlist. But also they have technical problems, and once even Tomi´s microphone gives up its ghost, but the problem is solved immediately. During „House of Sleep“ the band could have provided just the sound, because the fans sing along on top of their lungs. Tomi is obviously very moved by such fan enthusiasm. A great Finnish evening with some of the best bands from this country.
(Sandy Mahrer)

Insomnium
In the beginning the audience seemed a bit reserved, and the first meters in front of the stage were empty. But that changed after the first song, people went forward. The guys gave their best, and it was amazing how much they moved although they hardly had any room on this small stage. Singer/basser Niilo impressed with his German announcements, and the whole band with their musical skills.

Right with their second song Insomnium had won the audience, the room was full with headbanging people. The announcement „We play now something fast“ provoked loud cheers, and for the second last „The Day it all came down“ they guys gave again everything they had, therefore after the announcement of their last song you could hear several „What a pity!“ shouts.

Swallow the Sun
There´s one advantage for those 6 guys from Jyväskylä on such tiny stages. They hardly move anyway, but even then some collisions between singer Mikko and basser Matti happened.

Their setlist surprised once again, including e.g. „The Ship“ and „The Morning Never Came“. Especially the latter presented the development of those clean vocals that were much more powerful than on CD. All in all Swallow the Sun focused on their slower songs which presents in particular the magic of this band. Unfortunately not everybody in the audience could dig the music, but still the faster „Descending Winter“ or the final „Swallow“ caused people to bang their heads. 60 min in a dreamland, lost between deepest melancholy and the light at the end of the tunnel, that went by way too quickly.

Amorphis
After drum kit and equipment of the opening acts had been removed, there was a bit more room for Amorphis on stage who started with a folky intro. „Two Moons“ opened their energetic set, and suddenly singer Tomi Joutsen welcomed STS singer Mikko and announced, that this was the first but hopefully not last time that they will sing „Drowned Maid” together.

The performance was absolutely convincing, and Mikko received a lot of cheers. Amorphis is simply great, always, and delivered a flawless show, although this time the sound – presumably because of the location – was not quite perfect. The people at the Roxy went crazy and received 3 encores after the regular set. After the classic “Black Winter Day” an obviously satisfied audience strolled home.
(Sonja Kappes)

FINLAND: Three top bands from Finland, and all in one concert, so it was clear that Nosturi would be totally sold out. Just like pretty much the whole Amorphis/Swallow The Sun/Insomnium Europe tour that ended with this show on home grounds.

Insomnium
Because of the still pretty long queue at the entrance I could not see the complete gig, but the guys from Jyväskylä could as well have been the main act, if you judge a show just by audience reactions. The setlist focused on their recent CD “Above the Weeping World” (e.g. Drawn To Black, Killjoy), but contained also older songs like ”The Elder” or ”Bereavement”. Towards the end Swallow The Sun front man Mikko Kotamäki joined singer Niilo for the At The Gates cover ”Blinded By Fear”, STS keyboarder Aleksi Munter had been on stage with Insomnium pretty much the whole time already… “Devoid Of Caring” was the final track in this short but great show.

Swallow The Sun
surprised with a funny “Skippy” intro (instead of the usual Laura Palmer-theme), but then Finnish melancholy took over, with e.g. Hope, These Hours Of Despair, Descending Winters, Don´t Fall Asleep, The Morning Never Came …

I haven´t seen any bad show of those guys so far, but this was one of their best. Tight, energetic, intense and – to the disappointment of the photographers – they moved so much more than usual… The tour seemed to have some positive effect on those rather shy and reserved Finns, everybody seemed so much more self-confident and relaxed on stage. Surely the audience wanted more after “Swallow pt. 1”, but unfortunately the schedule didn´t allow more. A one-hour-gig that felt to be way too short…

It is difficult to imagine a bad show of Amorphis, and a show like this one is almost impossible to describe without using superlatives. Besides having a fantastic album out and being one of the best bands on this planet, those guys still appear so down-to-earth and close to their fans. This time fans were even closer than usual – if they had not managed to squeeze into the front rows, people shorter than 1,80 m could hardly see anything of the band, so bless the big screen on the upper floor of Nosturi… Tomi Joutsen, charismatic and well versed in any vocal style (clean and growls), lead the band through a program including highlights from their new “Silent Waters” album (e.g. I Of Crimson Blood besides the title track) and a selection of “oldies but goodies”, e.g. Alone, Against Widows, The Castaway, My Kantele.

Soon Nosturi became sort of Sauna… The only thing that was different – perhaps due to the strains of the tour – Tomi Joutsen didn´t rotate his dreadlocks so often… A surprise was that STS Mikko joined Tomi for “Drowned Maid”, and towards the end members of Insomnium and STS the stage with balloons and serpentine spray cans – but Amorphis managed to continue their set without major laughing injuries. Naturally this time the audience received the loudly demanded encores, and during “House Of Sleep” Tomi hardly had to do any vocal parts at all – the audience did that for him, and almost drowned out the band. “Black Winter Day” was the grand finale, a triumphant gig indeed!
(Klaudia Weber) 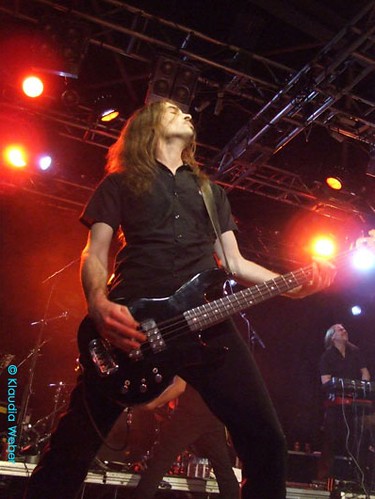