CARILLON was founded in 2012 at the University Twente in Enschede, featuring the current line-up since early 2014. The first EP „Last Kamikaze“ has been released recently; STALKER talked with the German band to find out more.

Could you tell us a bit about the band, how did CARILLON come into being?
Kai: By the end of 2011 we four had decided to make music together. We all have studied at the university Twente in Enschede (NL), but we all are from Germany. We have the same interests and somehow it was this cliche situation, that we always hung out together at the same bar and had this idea to found a band, which took place then in 2012.

How did you choose the band name?
Sersch: It´s quite common that you cannot decide on a name. Nothing seems good enough. We didn´t feel like picking a silly name that we won´t be able to stand behind later on. Just think of Dave Grohl who thinks now that the name „Foo Fighters“ sounds pretty crappy, and also the Broilers mentioned that they regretted their decision soon after founding the band. However, they both had lots of success.
Back to the topic – carillon is another word for chimes. As we all studied at the university Twente and this was the common factor, we came up with this name: on campus there is this huge tower with chimes that at certain times can be heard, especially well at the student café where we usually met for a beer aftr our lessons. And so somehow we came up with that name.

Tell us something about yourselves or the other band members.
Kai: Me and Sersch have been with CARILLON since the beginning of the band. I am the singer and bass player. I totally enjoy being in front of a crowd and to entertain them. Even when there are only a few people at a gig, they will receive a show worth for a sold-out stadium.
Sersch is one of the two guitar players, and he has entertainer qualities too, supporting me on stage. He also takes over the vocals for some songs.
Torben took over for Marek, who left the band when he finished his studies at the end of 2013. But Torben rocks like hell, like a music-athlete, although he is the youngest in the band. And he can drink, he even manages to pull of awesome soli when slightly tipsy.
Till is the drummer who joined the band in the beginning of 2014. He had been friends with me and Sersch for some years, and after the old drummer left the band, he was the perfect person to fill the vacancy. First of all, he knew the songs from the concerts he visited, and secondly, he introduced his own style and a his double pedal, which also pepped up our music.
Till: We all have had experience with other bands before CARILLON, some more, some less. I think I have most band experience, and pretty diverse: with 14 I played in a grunge band. Then there came Deutschpunk (punk music with German lyrics), which turned into a pretty tough Hardcore Punk, and after that I played in a Pop-Rock band. A little bit of everything.

Which music do you play, and what makes you special?
Till: Puh. Difficult question. If you would like to put us into a category, you´d have to splice up everything you know into little pieces and then put together something completely different. There are parts of beautiful Alternative Hardrock, but also heavy Punk parts. Then there is something for the headbangers and moshers, and then there are calmer parts just right to give your better half a big hug. Melodic Alternative Hardpunkrock, so to say.
In case you still have no clue how we sound like, just check out our EP or imagine that Motörhead, Rise Against, A Day To Remember and the Red Hot Chili Peppers had created a common clone.
And this is what we have tried to wrap into our 5 songs on this EP. You should get an idea what to expect at our shows. We have been pondering over it for a long time and then decided on those 5 songs. We think that those represent our style in the best way. We also started to create new songs, and those even give us the goosebumps when we are playing them, because we really enjoy it, and we hope that the audience feels the same when we present those songs live.
Torben: What makes us special is probably the fact that we are 4 completely different but still very similar people. Having fun making music is the most important thing for us. And I think you can feel that when you see us live on stage. Because that´s what several people told us afterwards. It seems they also feel the harmony among the band members. And we want to transport this harmony to the outside with our music.

What do you want to achieve with your music?
Kai: World domination! Haha. No, basically we want that the audience has as much fun as we have, when they listen to our music and attend our shows.
We want to offer a memorable show but also point out some things. Surely our songs don´t just deal with the typical Sex, Drugs & Rock’n’Roll stuff but also with social criticism or topics that we feel strongly about. We enjoy playing at charity events and we are glad when we can achieve something with our music, that we are able to point out some important things.
And naturally it is the dream of pretty much every musician to be able to make a living with this hobby. But we also know that there is a lot of work behind that, and there is never a guarantee for success. We have been able to make a good connection with musicians, bands and other important people in the biz and hope therefore that we can make a breakthrough at some point. Besides that we are still studying. We are still putting much more into the band than we can make with it, when money is concerned. But the fun factor of music making is enough to stick with this band. We enjoy squeezing ourselves with our instruments in Tetris style into a car, driving 200 km to entertain a handful of people – we have never regretted that.

What do you think about a record deal, an album, a music video and such?
Sersch: We don´t have a record deal yet. But our CDs has been sent to several important people, or we played to them personally or CDs were forwarded from people who know somebody to people who know somebody etc. Just like this business works. Without contacts you won´t achieve much. Luckily we have a good friend who can arrange some stuff for us. Something like being our manager. Cheers and big thanks to Julian.
Till: We don´t have a full length album yet, but plenty of song material for one. Once again it´s about the money we don´t have. We put a lot of our savings into the production of our EP, which was only possible to create by friends helping us. We found an inexpensive studio, the costs for mixing and mastering were reasonable, and a friend even made the EP artwork for free (thanks to Flo , eLSD). This helped us a lot and made this EP production possible. Our first baby needs to grow up, though. .
Torben: We are planning a music video. The concept for „Damned If You Do“ (also on the EP) is finished and we start rolling the cameras in December. Looking forward to it!

What are your plans for the upcoming months?
Kai: Yes, on top of the list the abovementioned video and also some concerts we are going to play. Then we will be busy applying for festivals and secretly you hope to receive a mail or a call which says that they find our music great and want to support us. In other words, that we get on a label.
Moreover, we are practising a lot and try to draw attention to ourselves and our music with concerts, merchandise and promotion.
Torben: And of course our songs will be soon also available online via iTunes, Amazon, Spotify & Co. You can listen to our EP on our Facebook-Page and on Soundcloud. Naturally we try to spread our music not only via live presentation. In our opinion it is impossible without the internet nowadays. It has become more and more difficult for small bands to gain a foothold and to become known. 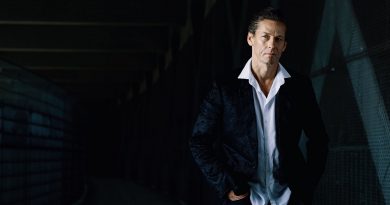 Block: The craft of music and beer