Admittedly, Kilt. (Kilt-dot) creates music which is anything but “easy listening” stuff – yet still captivating and a quite hypnotic and an exciting live-experience. As it´s not easy for journalists to describe the band´s sound scape of the new album, singer Teemu provides us with an in-depth analysis of “Reversal” and of every song:

Hi!  I´m Teemu Ruokonen. I´m the singer of the band Kilt, and I´m responsible for the music and the lyrics. 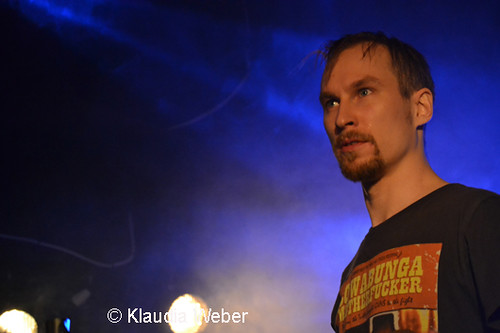 I´d like to take a moment to tell you a few things about the band Kilt. and the making of Reversal.  Kilt. was founded around the year 2000. It started as an instrumental band, but after some years it became obvious that we needed to incorporate vocals to make our message clearer to the audience.  We made the first album EVERYTHING/NOTHING with a bunch of different singers that we´d asked to contribute to the songs. It worked out great and, to me, the album still sounds very interesting and different because the music isn´t chained to one voice or one person.

We did put in a lot of effort to make this work, but in a live situation it appeared to be almost impossible to have all these different singers actually participate, and so over the years it gradually evolved into a simpler form where we tried handling the vocal duties ourselves. Then came the point where we started to record Reversal. It was around 2010. We decided to do the album with minimal vocal help from outside of the band. When the album was almost recorded, we decided to make the biggest line-up change yet in Kilt.´s history. I was to abandon my drummer´s post and become the singer (since I was responsible for all the lyrics), and we got the multi-talented Mikko Herranen – who had already been in the inner circle of the band for many years – to step in as our new drummer. During recent years a few more changes were implemented and our line-up became what it is today.

The concept:
Reversal´s theme centres around the events leading up to the end of the world – told backwards. The more you listen, the farther you get from the moment of the apocalypse.

The Process
We recorded the album by ourselves over several unique sessions with Mikko being the main operator. We used different locations like the Noise Floor studio, our rehearsal place and various summer cabins and cottages. It took roughly a year to finish recording. We didn´t hurry.

Music
We wanted to have a wide variety of dynamics and sounds on the album. We also wanted the heavier stuff to be really heavy. When you hear a heavier part, you can be sure that we well and truly killed the instruments in the studio. Kilt. has always been about odd time signatures, and on Reversal I think we really nailed some good grooves. This album sounds fat and raw.

Lyrics
This is a concept album, so the lyrics go hand in hand with the story.  I always try to hide many different meanings in my lyrics so that every song can be interpreted several ways. I like to mix politics and my own personal life in the same song.

The Influences
Musical influences are limitless, but I think that this album was mostly influenced by bands like Radiohead, Meshuggah, Massive Attack, The Dillinger Escape Plan, MoHa! and Nine Inch Nails. Books like Humanity, 1984, The World Without Us, The Road, The official report by FEMA of 9/11.  Movies like The Road, Wall-E, Zeitgeist, Mad Max, Terminator.

Songs
1. Cassolette
The first sound you hear when the record starts playing is the sound of the end of the world. I´m not defining what it is or how the world ends, but for me it´s that calm and eerie sound that comes from pure emptiness.
Trivia: The spoken word was voiced by our beloved friend, Matias Celayes, who also did the video for Solution.

2. EEPA
The divine intervention. The wrath of god. This is the point where everything is already fucked and there is no escaping the End. God has been sleeping for a thousand years and when she wakes up she sees what humanity has done to the earth and she´s justifiably pissed off.  Trivia: The name of the song comes from The Simpsons Movie. The scene where Grandpa is sprawled on his side on the church´s floor, running in circles and shouting “EPA”.

3. Memoirs  Calm before the storm.
The song isn´t listed on either the booklet or the cover of the CD. In a way it´s a song that´s hiding in plain sight. It was initially supposed to be part of The Witness, but we decided to chop the song into two different tracks. It is an intro for The Witness, so it features some themes from it.
Trivia: We spent many hours at a huge cottage recording some fat percussions for this song. The whole band was in a circle with a bunch of different drums and percussion instruments. Everyone agrees that it was the greatest moment of recording this album. We ended up using none of those percussions.

4. The Witness
The animals have seen enough of the Man´s atrocities and so they end their lives leaving humans alone to fend for themselves. To me this is the “ultimate Kilt. song”. Lyrically it pointed the way to the thematics of the album. Musically it covers all the essential Kilt. moods.
Trivia: The cover art was designed with the lyrics of this song in mind. At first I wanted the artwork to feature the whale on the cover but then we realized that there wasn´t much going on with the whale being there so we replaced it with horses. A good decision.

5. Continue
This is the breaking point where humans fail to act on their imminent destruction and simply continue committing their atrocities.  This might be the oldest song on the album. It has this trip-hop feel to it. Listen to this one loud with good speakers so you can truly feel the low end.
Trivia: We used an electronic baritone guitar and a bow as a makeshift cello of sorts. With lots of fuzz of course!

6. Solution
There is still a shred of hope for humans and some people are still trying to convince their leaders to do the right thing.
Trivia: The first guitar riff has kept to the same time signature for the entirety of its existence but the notes themselves have changed roughly 25 times so the final version doesn´t resemble the original at all. We loved the time signature from the outset but it took a lot of time to find the right melody for it.
More Trivia: The phrase “We are the problem and we should provide the solution” comes from a documentary about plastic. Don´t remember the name of the documentary, but there was a wise lady that said those exact words and I was stunned. It became the catchphrase of the album. The central point of the story. The motto of life.

7. Keys In Our Hands
This guitar riff was composed by our former guitarist Pasi Kuutti. It started out as simple pastime fun, but ended up being a key element of the album´s story. The statement is simple and powerful and it is addressed to the leaders and bankers of the world.
Trivia: The drum beat was played by hand on a Korg Electribe sampler and it was recorded on the first take. It´s odd because it´s so random and improvised.

8. Until We Expire
At this stage humans begin to realize that they simply cannot continue to live the way they´ve been used to and many of them scream for change.
Trivia: The weird solo sound in the middle of the song was an accident caused by a poor connection between the guitar and its effects. Esa was supposed to play a melody but when he connected the guitar with the amplifier it started to live a life of its own and we immediately pressed the record button and that was that.

9. Dead In The End
The leaders are trying to convince people that everything is OK – please stop thinking for yourselves and just continue to consume.  Our former bassist Pia sings here. We tried to create quite a schizophrenic atmosphere for the verses and I think we succeeded. The last part is supposed to sound full of hope, laced with the feeling that everything will be fine.
Trivia: During the buildup in the middle of the song Mikko is playing drums over the left speaker and I´m playing over the right, so in a way that´s the moment of transitioning from one drummer to the next.

As a band we are alive and well. We are now rehearsing for our upcoming gigs and for the next album which will come out in 2014.   I hope you´ll have some intense moments with this record and I hope you will give it another few spins on your player, because while it isn´t the easiest record to listen to, it will grow on you when given just that little bit of extra time. Either that or we´ve failed drastically. Thanks! 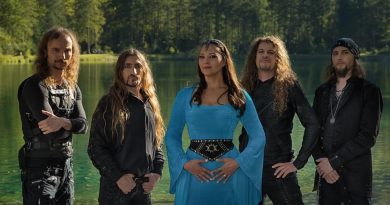 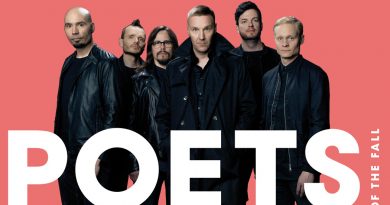 Poets of the Fall: You’ll be taken through myriad sonic landscapes