The name for this Alternative/Industrial Rockfestival hit the bulls eye once again – chilling temperatures made me wonder if enough people would dare to leave their cosy homes for this party where 6 bands, 4 DJs (AQI, AFRO, SET E-110, FREAK) were supposed to rock the stage. “Supposed” meaning, the organisers (Elektrik Produkts) had to deal with an emergency situation to find replacement for an act that had cancelled only 12h before the show … and surprise surprise, there were even two candidates to fill the slot of Pronssinen Pokaali.

Friday, January 24
My worries seemed accurate, as the first substitute act Bullet Control had gathered only their hardcore fans right in front of the stage.

A pity, as their Faith-No-More inspired sound was quite appealing, as well as the crazy stage show. Well, maybe rather Mr. Bungle than Faith No More … during their short set more people arrived so that the band received some more cheers from the couch/seating section. www.facebook.com/bulletcontrol

Odalisqe
is a quite new band, but they had obviously already made some fans due to their appearance at Helldone 2013 festival with HIM. Moreover, the self confident and talkative front man Vivian Shockley managed to get the other people off their seats. His antics and the appealing song material like “You”, “Snow-white” or “Disable Me” put the crowd into party mood, and many danced to this wild Glam/Industrial/ Goth sound mix. www.facebook.com/Odalisque.official

Bob Malmström
has always been an audience favorite, and also the second album “Punkens Framtid” had been quite a chart success. By now it became clear that the first Findustry evening would be a success, too. And what to say, those guys are always fun to watch in their nice suits, the drummer dressed for a Tennis match/Royal family garden party, and then they kick off brutal Oldschool Death/Grind, interacting politely with the audience in between – so nothing left to say but tusen tack guys! PS: Once again Finntroll-shouter Vreth gave a guest appearance. www.bobmalmstrom.com

Flesh Roxon
were indeed a surprise, probably not only for me. The sound of those guys from Tampere could be described as Stray Cats / The Baseballs after the Zombie Apocalypse, and they also looked a bit like that. This Hardcore Rockabilly Metal seemed irresistible for dancing feet, because those guys had a bigger moshpit than the band before… A great party act to conclude day 1. www.facebook.com/fleshroxon

More photos in the gallery, link in top section!

Saturday, January 25
gathered more party people, and a bit earlier than on the day before, so luckily all the bands had enough audience to entertain.

The Closed
Was one of the bands I had been really looking forward to. But this time I was missing someone, namely singer Tony, and something – the costumes, cross dressing, Loveboat, popcorn, horse masks, to name a few … Mikko Saarela handled all the clean, growl and shriek vocals flawlessly, and the drummer took the part of crazy MC – e.g. handing over audience awards for attendance / moving to the music – and also “Mary Poppins” gave a short appearance – but please again more of those crazy sick chaotic show elements… www.myspace.com/theclosedspace

Freakangel
were the guests from Estonia that many had been curious about or even eagerly awaiting. And the trio from Tallinn – D. Darling – voices, keyboards, programming, Art – lead & rhythm guitars, Roman D. – drums – gave it all indeed and hammered their driving, stomping, incredibly heavy Industrial riffs (with rough vocals) ceaselessly into the enthusiastic crowd. www.facebook.com/FREAKANGELofficial

Iiwanajulma
were however the stars of this evening, celebrating the release of their new CD Hallelujah! Seems to be a fitting name as I had already compared the front man´s passionate performance style with preaching.. And what to say, probably one of the best gigs of this remarkable act. No technical problems (so it seemed), initial nervousness vanished soon, and in the end singer Ville obviously enjoyed facing such big and ecstatic crowd – he was all smiles… The music can be compared to Mythbusters explosions – violent, loud & earth-shattering but still so beautiful and touching you simply want MORE … www.iiwanajulma.fi 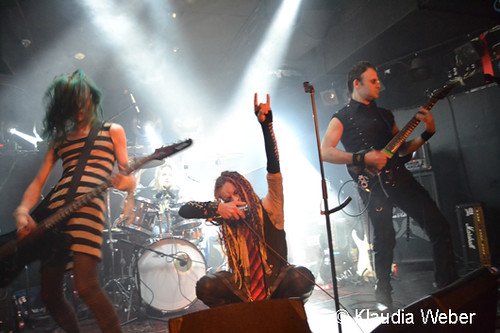 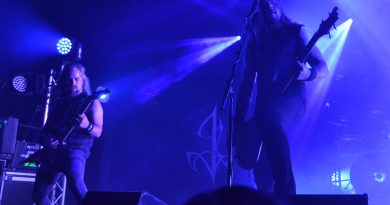