For the second time, the Metal Dayz took place in the wake of the Reeperbahn festival in Hamburg, Germany. All the bands were in touching distance during the half an hour set-up in the foyer. Unfortunately, lesser-known bands had their meet & greet sessions before the shows, so they pretty much remained unnoticed due to lack of pre-hype. After their performances, the interest would have been certainly much higher.
Interactive photo gallery at the bottom

Friday, 27th of September 2013
The first evening was held under the slogan “Young Generation Night”. Musically it was all about metalcore with small detours into pop crossover and hard rock. We missed Mambo Kurt, who was opening in Marx every evening, Mandowar and a Q&A session with the organizers of Wacken Open Air as well as a reading, but we were just in time for the first proper band at 19:00 in the big hall.

What a name! Only because of that I previously ignored this band and actually missed a lot since the Danes play first-class metalcore with incredible energy, which transferred from the first song onto the slow-growing audience. However, the singer Jonathan “Jackie” Albrechtsen incidentally belongs to the few musicians who can afford to take off their shirt. Scarred by beauty was definitely a very good opener.
www.facebook.com/scarredbybeauty

Workshop: shout coach (Marx)
The workshop was more a presentation than an interactive workshop because the useful information would have sufficed for a 15-minute-speech rather than having itrepeated constantly. An hour speaking time was way too long. I can’t say who the speaker was and couldn’t get a hold on this information even though I asked around a lot. On the whole, it was a pretty dull event.

The band from Castrop-Rauxel is part of many line-ups for quite some time now and despite their very short band history, as their debut was released just a year ago in 2012, they managed to garner a large fan base. To be honest, I never saw them live as their band name kind of scared me off. Whether you like their metalcore with techno elements or not, the sextet really kicks ass. With a lot of announcements à la “Hamburg, you horny slut!” and similar statements and lots of interaction with the audience they were well-received and all fooling around like letting the audience sit down and stand up again was quite enthusiastically joined in. The voices of Sebastian “Sushi” Karlene and Kevin Ratajczak complemented each other well, although not exceptionally talented. Musically there was nothing objectionable and the music itself is just a matter of taste.
www.eskimocallboy.de

Dressed in white and with boyband’ish hair, this band from Karlsruhe was initially announced to play a mixture of industrial, metal and pop. The “industrial” part were the dubstep passages that were actually quite well placed in their modern sound but the overall performance was more suitable for some band contest rather than such a big event. However, their audience seemed to be comprised of young girls who fully adored them. They also shouldn’t have done covers because it drastically showed all the weaknesses of the band, as they certainly were pretty mediocre regarding their instrumental and vocal abilities.
www.runlibertyrun.de

Circle pit, wall of death, stage divers and lots of interaction with the audience made this Caliban performance superb. The concert of the founding fathers of the German thrash metal was well-rounded from the start until the end, unless they secretly failed while I rushed over to the parallel playing Bombos, for the last 20 minutes. No one was left unsatisfied by the selection of songs. I still don’t know now what was the fuzz about the inflated condoms that wandered from the audience up to the stage, but singer Andreas Dörner easy and played along by putting one between his legs.
calibanmetal.com

Bombus, that I visited briefly while Caliban burnt the stage in the big hall, are true Lemmy fans. Bombus are playing dirty rock à la Motörhead – and that very well. Only their bass player features himself way too much compared tohis actually skills. It’s a pityythat I got only a few songs to see so I will certainly go to see them again, once the Swedes play nearby.
www.bombusmusic.com

Saturday, 28th of September 2013
The slogan of the second evening was “Full Metal Night”. Hard rock and power metal were on the agenda and thus offered a mixture that made it enjoyable for most of the guests.

You can believe on the spot that this band was the supporting act for AC/DC. The New Black rocked the Markthalle from the beginning of their set and showed a lot of enthusiasm. Singer, Markus “Fludid” Hammer, electrified the audience and their straight-forward hard rock certainly made some sore necks in Hamburg.
www.thenewblackofficial.de

Country hard rock meets the style of Mandowar, who played in the foyer, probably the best. The middle-aged guys from Wetzlar are dressed up as cowboys and play covers on Iron Maiden’s “Fear of the Dark”, Guns’n Roses’ “Sweet Child of Mine” and Alice Cooper’s “Poison” with mandolin, acoustic guitar and bass ukulele On the whole, the songs by Mandowar are funny and well done. Unfortunately, the three guys played every day the same set of songs, with the same announcements and the same order. A little variety would have been nice.
www.mandowar.de

Workshop with Victor Smolski (Marx)
The little venue of the Marx was really crowded and the 45 minutes of the guitar workshop by Rage’s Victor Smolski were filled with humour, samples of his skills and tips and tricks.
www.victorsmolski.de

I missed the first 15 minutes due to the workshop but it wasn’t a big deal. Orden Ogan had indeed great accessories in the form of… yeah, what was that? Predators? Space Marines? Well, doesn’t matter. In any case, they made all efforts to bring it on stage. Unfortunately, the voice of the singer Sebastian Levermann lacked power and the band could not keep one off from yawning despite being technically excellent.
myspace.com/ordenogan

This stupid and misleading name conceals a band that turned out as a highlight of the evening. The music, the Hamburg based band plays, makes you close your eyes and feel like you are in a convertible driving down the Route 66. During the last song the singer, Oliver Peters, jumped down in the audience and sang directly to his surprised fans. I’m glad to see that the band has decided to come back together after 17 years. This band is fun and rockin’.
www.5thavenue-hamburg.de

Seeing just the drum kit is experience enough, but hearing Andre Hilgers taking place behind it and get going with the opener “Twenty One”, certainly and delivered all the promises from drummers’ soggy dreams. Very versed but by no means bored, Rage played down their set with little to no surprises. Since they’ve started 15 minutes late I decided to leave after half an hour for the benefit of Paragon that played in Marx at the same time.
www.rage-on.de

As the Hamburgers pretty much attract the same audience as Rage, it was quite manageable in the Marx. Maybe a quarter of the little venue was filled, but the loyal fans of Paragon celebrated each song of their set. A visibly emotional Andreas Babushkin was not tired to emphasize how much he appreciates this. The band gave their very best from their opener “Iron Will” till the last song “Mirror of Fate” and delivered a really felicitous show. At 23:00 Paragon knocked off, whilst Rage were still playing some additional 25 minutes, which allowed all Paragon fans to see some Rage in form of “Winter“, “Higher“ and “Soundchaser“. A nice ending!
www.paragon-metal.com/

Bodom night was the motto of the evening and it truly was a Bodom night. With the exception of the German band Accu§er there were only Finnish death metal bands playing.

After one was spoiled by a relatively good sound and first-class openers, Medeia from Tampere were even worse. An indefinable noise made it impossible to hear the individual instruments or even the singing. The performance was horrible and I can only hope that the sound guy was half in the bag and the band normally doesn’t sound that bad, but I won’t try them a second time.
www.medeiaband.com

After Medeia, Insomnuim were real joy and ear recovery. The sound was alright and the powerful, melodic death metal from Joensuu managed to heat up the crowd and created either one or the other circle pit. The voice of singer Niilo Sevänen convinced all along the line with growls and clean vocals. His German announcements did the rest. Insomnium delivered a successful performance.
www.insomnium.net

As Accu§er had to play against Children of Bodom, I heard only three songs, before it moved me into the Hall. The only German band of the day played ordinary thrash metal which was not as hard as the one from their colleagues of Kreator, Sodom, and Destruction, but rather groovy.
www.accuser.de

The unchallenged headliner on the weekend, Children of Bodom were given a welcome with appropriate expectations. The guys from Espoo played one of their best concerts that I’ve ever seen of then in a long time and the band is hitting the stages for a pretty long period already. After Alexi said that their first time on a stage in Hamburg was 16 years ago, one felt really, really terribly of age, but many old hits of the band sweetened it. Light, sound, song selection, interaction with the audience, which rewarded the band with circle pits and walls of death… – just perfect.
www.cobhc.com

Conclusion:
With a fantastic concert by Children of Bodom at the end, not much remains to say. The Hamburg-based Metal Dayz 2013 were, -with the exception of the overlap between Paragon and Rage-, a resounding success, great organized, spiced up, at a reasonable price and with many highlights. The shout-coach and a few other odds and ends were not quite so tingly, but that’s only bagatelles and the bands were, apart from three exceptions, thoroughly good up to very good. Stalker.cd is already looking forward to the next time. 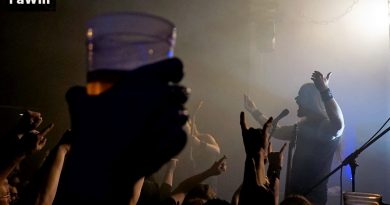