Thursday
Tooth brush, beer, tent, sleeping bag – all packed up for Metalfest. On the highway we listen to the radio and storm warnings for exactly the are in question. Well, that adds to the excitement. But the weather isn´t as bad, it´s indeed really hot. We arrive just in time for Iced Earth, who start their set – just like on their last tour – with “Dystopia”.

The first rows go crazy right away, and because the set has to be kept short, they focus on their classics, leaving out titles from the Ripper Owens era. The sound is not that great in the beginning and only improves in the final phase. With hits like “Stormrider”, “I died for you”, “Watching over me” – where everybody sings along – and new songs like “V” and “Boiling Point” you cannot do anything wrong. “Iced Earth” ends a great 45min show.

Doro takes off with “I rule the Ruins”. The German Metal Queen became a bit too much for me because of her constant media presence and Wacken-promotion, but she definitely kicks ass live. Yet it´s only the first 4-5 rows that are rocking along, the rest rather enjoy their beers and only join in with the metal maniacs when classics “Für immer”, “All we are” and “Burning the Witches” are played.

I had been looking forward to seeing Testament , and many headbangers swing their long hair when the Bay Area Thrashers start with “Rise up!”. Same scenario at “More than meets the Eye” and “Native Blood”. The sound is not much better than before, though. At “True American Hate” it isn´t raining, it´s pouring, and 2/3 of the audience are looking for cover. Testament don´t care at all and continue for all the hardcore fans that tear up their soaking wet shirts during “Dark Roots of the Earth”, “Over the Wall” and “The Formation of Damnation”. Great show!

After that it´s no longer funny. The Children of Bodom soundcheck takes more and more time, and even the crowd switch their “C.O.B.” chants to some booing. You have the impression the band does it on purpose to gather a bit more people in front of the stage. And many people are already there, waiting in the pouring rain. Just before the mood turns ugly, the set starts with a 25min delay. Thus the Finns´ only festival show had a bitter taste, and the audience attendance dissipates continuously despite the solid performance and excellent song choice.

Friday
After a lavish breakfast with steaks and sausages (yes, this is a festival meal) the comic characters of Grailknights try to entertain me. Luckily I can escape as I have to pick up my girlfriend from St. Goarshausen station. Phew!

My next band on this day is Hypocrisy. My favorite Death Metal Band from former days still kicks ass. For me this band is the best of the day when it comes to spheric Death Metal, and headbangers warm up with e.g. “End of Disclosure” and “Tales of thy Spineless”, until “Fractured Millenium” shatters the foundations of the Amphitheater. Tägtren comes, sees and conquers. “Fire in the Sky”, “Elastic Inverted Visions” and the encore “Roswell 47” are some of the classics, and there could have been more of those, for my taste. I´d loved to hear “Evil Invaders” once again.
Then J.B.O. force some fun onto the audience, some like it, some don´t, some even freeze in shock and thus count as audience. Classics from the “Meister der Musik” cd had been funny back then, and the author owns this album, but… err… no.

Later after a walk across the area it´s time for Soulfly, who for some reason haven´t gathered so many fans. The situation changes with the second song “Back to the Primitive” when the pit fills up. Unfortunately it´s not possible to have a circle pit in an amphitheater, but I bet otherwise there would have been one. They play “Seek`n Strike” and a wonderful Sepultura Medley with “Arise”, “Refuse/Resist” and “Dead Embronic Cells” which thrills an enthusiastic crowd – people are jumping and banging for their lives. “What comes around, comes around”, the unavoidable “Roots” and the final “Jumpdafuckup” Max & family indeed warmed up the crowd for the following acts.

In this case it was Accept, who have a strong opener “Hung, Drawn and Quartered” for a set balancing classics and new songs. You can see how much fun Wolf Hoffman, Peter Baltes, Mark Tornillo & Co. have performing, and of course you can hear it. The sound is good, the band poses but they don´t exaggerate, and the people at Loreley celebrate Heavy Metal in its purest form with classics like “Restless and Wild”, “Breaker”, “Princess of the Dawn”, “Balls to the Wall” and “Fast as a shark”. >In that moment I realize I haven´t seen Accept live yet. Well! Indeed something I had missed, but better late than never. Great gig!

You could never see or hear enough of Down , and Phil Anselmo´s new band has reached a similar status of Pantera, at least in my opinion. They begin with the powerful “Eyes of the South” from Nola Album 1995 and continue with “Witchtripper” from the recent Purple EP: Luckily they focus on their first two albums, omitting “Over the Under” material completely. “Lifer”, “Hail the Leaf” and “Ghosts along the Mississipi” continue a demonstration of heaviness, and Mr. Anselmo cracks some jokes in between. Unfortunately hardly anybody understands them, maybe due to the horrible Louisiana Slang. The awesome songs “Stone the Crows” and “Bury me in Smoke” wrap up a brilliant 1h set.

Have I been overly using superlatives? No? But now I have to, because it´s SLAYER! The Amphitheater notices a new attendance record. Slayer take off with “World Painted Blood” and all you can see is hair and enthusiastic faces. The first highlight is “War Ensemble”, and it seems to me that the band focuses on songs where Jeff was one of the composers. In between songs there´s a respectful silence, and also Tom Araya does not talk much, but keeps thanking for the support Slayer has received. “Mandatory Suicide” and “Chemical Warfare” are further highlights, and the usual question before “Postmortem” “Do you want to die?”, which earlier received the cheerful Yeah! from the crowd, ends this time in total silence, followed by a calm “Nobody wants to die”. What an unforgettable moment. Classics like “Seasons in the Abyss”, “Dead Skin Mask” and “Raining Blood” complete the program, before the encores “South of Heaven” and “Angel of Death” wrap up a fantastic Slayer Gig. Gary Holt is a worthy substitute for Jeff Hannemann, but he surely cannot replace him. And for some reason it feels it might be the last Slayer show you could attend.

My first band of the day are Krisiun . Tecnically high-class and tight, the guys from Brazil attract quite a crowd. I cannot stand the non-stop hammering, though, and after 3-4 songs leave with some friends to enjoy the wonderful view of the world´s cultural heritage Oberes Mittelrheintal from a look-out platform.

Next on stage are Threshold, who I have enjoyed already at Rock Hard Festival. As it is the case with Saxon, you don´t really have to know the songs of this band – because all of them are great! And there is this hyper-active front man Damian Wilson, who occasionally climbs over the fence and even runs around among the people on the stairs of the Amphitheater. While still singing! Respect! Threshold play their Progressive Hardrock/Metal with ease but still tight and leave you open-mouthed. A great band with an even greater singer. I had never heard of them before RHF, but now they have one fan more.

Kvelertak are on our schedule, after the pagan pop stars Turisas made room. Those Norwegian Black´n Punk´n Rollers make it easy to like them. Straight forward, take no prisoners – jawoll ja! This induces good mood. Even my not-so-Metal-head-ish girl friend likes them. But I cannot tell you any song titles, “Bruane Brenn” is the only one I could remember, basically THE hit by Kvelertak, but the rest of the set was equally good.

Wintersun surprise me. Not because I like their music so much, but because the area fills up completely. I have to admit that their Symphonic Metal sounds pretty good. Quite appealing! Still not my cup of tea.

Ladies and gentlemen, now it´s time for the Lords of NWoBHM! SAXON! Even during the first songs, singer Biff gets a bit nostalgic, as the band has played this very stage 30 years ago, and he praises the festival and the location, before we get to hear the first classics “Power and the Glory” and “Heavy Metal Thunder”. It is almost as full as during the Slayer show the night before, and Biff Byford & Co. get everybody to sing along during “Crusader”. The new songs “Made in Belfast” and “Night of the Wolf” are almost as popular with the crowd as the classics. After “747”, “Strong Arm of the Law”, “Wheels of Steel” and the must-haves “Denim and Leather” and “Princess of the Night” the headliner of this festival evening releases a satisfied audience into the night. 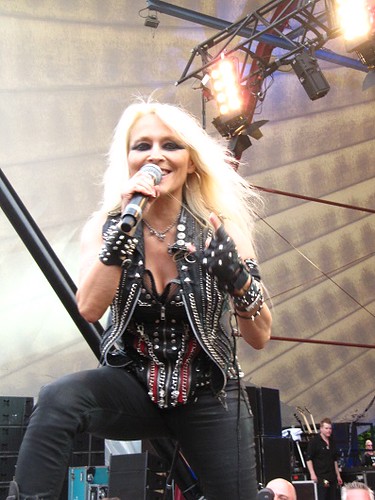 Triosphere: The more, the better!