The 15th Summer Breeze Festival die Festivalsaison offered a spectacular line-up. Unfortunately this year a photographer was not available all the time, and even more unfortunately later there were problems with the photo permissions for headlining acts, too, although STALKER had been reporting extensively year for year about this festival… In order to ease all the extra work load for the reporter team, the editor decided to minimalize the English version (very free translations, still trying to deliver the most essential content of the German original) – but enjoy all the beautiful photo galleries!

(photos – see interactive Flickr gallery at the end of the text)

Wednesday is the traditional warm-up day featuring many rather unknown newcomer acts in the Newblood Bandcontest: ARSIRIUS, WITHOUT WORDS, OBSCURE SPHINX, AMOEBA, GOODBYE TO GRAVITY and BUFFET OF FAITH, which, so I heard, were all pretty good (Obscure Sphinx won, by the way).  Rage would have deserved a better slot – great gig though. The same for Tankard who always enjoy their time on stage. (Markus)

Die Apokalyptischen Reiter  drew a massive crowd, too bad I was still busy setting up my tent, therefore no photos of this energetic show.

LACUNA COIL
When it got dark it was time for the darkness from Poland: Behemoth – the fans were eager to welcome Nergal back on stage, and the band was eager to deliver (incl pyros). Indeed one of the best gigs of the festival, this band is always a killer!
Setlist:
Demigod
Moonspell Rites (And The Forests Dream Eterenally)
Conquer All
Christians To The Lions
Alas, Lord Is Upon Me
At The Left Hand Of God
Slaves Shall Serve
Chant For Ezkaton 2000 E.V.
23 (The Youth Manifesto)
Lucifer

After such a show, a band like We Butter The Bread With Butter sounds like playing children songs, and I assume they had the youngest audience at the festival, and quite a big one too. They gave their best and were quite impressive, and if you don’t like this style, no need to watch.

Eluveitie rocked the main stage quite successfully, and then Subway to Sally, before it was time for Ghost Brigade on the tent stage. Their heavy Doom riffs put the quite big audience in a trance. (Cornelia)
Setlist:
Lost In A Loop
Traces Of Liberty
Breakwater
Into The Black Light
My Heart Is A Tomb
Clawmaster
Soulcarvers

Bleed From Within are a quite young band from Glasgow, playing at quite early hour, nevertheless they managed to inspire several circle pits. (Cornelia)
Setlist:
Intro
Look
Arnie
The Novelist
Dishonour
This Is Our Legacy
Murdoch
The Healing

DEW-SCENTED – what can I say, it was WOW, tough music and a great stage show, it was a pleasure to watch them live. (Markus)
Setlist:
Hubris
Sworn To Obey
Turn To Ash
Soul Poison
That’s Why I Despise You
Storm Within
Cities Of The Dead
Never To Return
Thrown To The Lions
Acts Of Rage

After this brutal sound, Mystic Prophecy offered some melodies to entertain the Power Metal fans, despite the heat. (Cornelia)

Crowbar did not deliver the killer show and set list I had hoped for, the sound was pretty bad and there was not much action on stage. What a pity. (Markus)

UNEARTH on the main stage are veterans of Metalcore and rarely seen in Germany, therefore there was a huge crowd, willingly following the invitations for circle pit. As much action on and in front of the stage. (Cornelia)
The Great Dividers
Watch It Burn
Arise The War Cry
This Lying World
Bloodlust Of The Human Condition
Zombie Autopilot
This Glorious Nightmware
Eyes of Black
Endless
Giles

Black Sun Aeon had been at SB in 2009 and  did everything right once again. Their Finnish melodic Metal attracted quite a crowd, too – fantastic gig, just as expected. (Cornelia)
Setlist:
Funeral Of The World
Frozen
Solitude
Oblivion
Nightfall
Funeral

Jasta vs. Windstein  on the main stage drew a huge crowd because of the world premiere, yet I followed from a distance, when Jamey Jasta (Hatebreed) and Kirk Windstein (Crowbar) delivered a potpurri of classics and new songs, a mix of Hardcore, Doom and Metal – quite impressive.
Setlist:
Begging For The Truth
Free The Fallen
Enlightened To Extinction
Monuments Of Ash
Lead The Ghosts
Astray
Behind The Blackest Tears
Buried In Black
Leader Into Demise
Soldiers Of Hell
The Fearless Must Endure
Mourn The Illusion
Walk That Path Alone
Nothing They Say
Death Bestowed
Screams From The Sanctuary
Enslaved, Dead Or Depraved
I Will Be Heard

BEFORE THE DAWN sounded fresh despite their 7 albums; their melancholic almost gothic Melodic Death Metal indeed stands out when compared with genre colleagues, even though there are no more clean vocals – a very engaged and energetic show. (Cornelia)
Setlist:
Intro
Pitch-Black Universe
Wraith
Fear Me
Throne Of Ice
Eclipse
Fallen World
Unbreakable
Phoenix Rising

Insomnium are another must-see band from Finland, no matter where or for which audience, they will always inspire the crowd that will celebrate them. (Markus)
Setlist:
Inertia
Only One Who Waits
Weather The Storm
The Killjoy
Unsung
Through The Shadows
Mortal Share
One For Sorrow

DARK TRANQUILLITY are another must-see act for every Melodic-Death-Metal fan, an almost unearthly fantastic gig with classics and new material. (Markus)
Setlist:
Terminus (Where Death Is Most Alive)
In My Absence
The Treason Wall
The Wonders At Your Feet
The Mundane And The Magic
Inside The Particle Storm
Zero Distance
The Sun Fired Blanks
Misery’s Crown
ThereIn
Final Resistance
The Fatalist

Krisium warmed up the crowd in the tent before the main stage turned dark, with Norwegian IMMORTAL returned to SB after 11 years, they had even still played at the old area Abtsgemünd. (Cornelia) A fantastic and stunning show, they gave once again their best. (Markus)
Setlist:
Withstand The Fall Of Time
Solarfall
Sons Of Northern Darkness
Rise Of Darkness
Damned In Black
Triumph
At The Heart Of Winter
In My Kingdom Cold
Tyrants
One By One
Beyond The Northwaves
All Shall Fall
The Sun No Longer Rises

Three days of partying took their toll, only from far I could follow the
Night In Gales Setlist:
Intro: Epitaph
This Neon Grave
Days Of The Mute
Tragedians
Five Scars
Endtrip
Intruder
Void Venture
Autumn Waters

NAGLFAR managed to entertain their fans – and also group of visitors from the nearby village – at this relatively early hour. (Cornelia)
Setlist:
Pale Horse
Spoken Words of Venom
The Darkest Road
The Perpetual Horrors
III: Death Dimension Phantasma
I Am Vengeance
The Brimstone Gate
A Swarm Of Plagues
Harvest

AUDREY HORNE should not be missed, ever, they delivered one of the most impressive live shows of the festival, a truly underrated band. (Cornelia)
Straight To Your Grave
This Ends Here
Show & Tell
Youngblood
There Goes A Lady
Bridges And Anchors
Redemption Blues

Paradise Lost had a lot to offer – a great set and a good mood. Still the audience seemed a bit lame, maybe because of the heat and exhaustion. (Cornelia)
Setlist:
The Enemy
Honesty In Death
Erased
Forever Failure
Tragic Idol
Pity The Sadness
One Second
As I Die
Fear Of Impending Hell
Enchantment
In This We Dwell
Faith Divides Us – Death Unites Us
Say Just Words

Vallenfyre shows are pretty rare, and perhaps their 5th show should also  be their last. They played almost the complete Fragile King album
Setlist:
All Will Suffer
The Divine Have Fled
Ravenous Whore
Cathedrals Of Dread
The Grim Irony
Humanity Wept
A Thousand Martyrs
Seeds
As The World Collapses
Desecration

Amon Amarth had the area burst with people, I cannot even describe what was going on, fireworks musically and pyro-technically. no rest for the wicked! (Cornelia)
Setlist:
War Of The Gods
Runes To My Memory
Destroyer Of The Universe
Death In Fire
Live For The Kill
Cry of the Black Birds
Fate Of Norns
Pursuit of Vikings
Northern Star
For Victory Or Death
Victorious March
Twilight Of The Thunder God
Guardians Of Asgaard

Entrails and their old school death in the style of Entombed, Grave & co drew quite a crowd despite the late hour.
Setlist:
Blood Red
Evil Obsession
The Morgue
To Live Is To Rot
Entrails
Voices
End Of All Existence
Eaten By The Dead
Crawling Death
The Slithering Below
Unleashed Wrath

Hatesphere were the last band at the festival and managed to wake up the crowd that was still standing at 3:30, even I felt quite fit after their energetic show. (Cornelia)
Hate
500 Dead People
Floating
Resurrect With A Vengeance
Oceans Of Blood
Reaper Of Life
Kicking Ahead
The Coming Of Chaos
Sickness Within 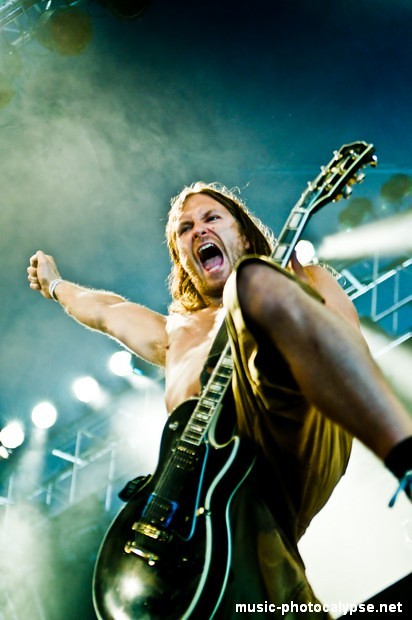