Sometime any great career comes to an end. After almost 40 years in music business, Judas Priest will no longer play worldwide tours. So there current “Epitaph” world tour, which already started in 2011, will be there last one. In order that every Priest fan out there has the chance to see the band for one last time, Glenn Tipton, Rob Halford, Ian Hill, Scott Travis and the new member Richie Faulkner play in every available venue around the globe. So they also come to Münster, a city where only occasionally Metal bands make a stopover for a show.

Also Thin Lizzy seemed to have extensive time-out at some point, but since 2000 this Irish band is getting loud once again with a hugely different line-up. Only Drummer Brian Downey remained from the original line-up, and guitarist Scott Gorham has been in the band for a while. All the others seem to have been fed the Lizzy classics with their mother´s milk. Especially neo-singer Ricky Warwick (part of TL since 2010) kicks ass tonight, he also plays the acoustic guitar and harmonica and entertains a surprisingly lively Munster audience. The band seems very enthusiastic, tight and lives up to the honorable Thin Lizzy reputation with the opener `Are you Ready` and of course the Evergreens `Whiskey in the Jar`, `Cowboy Song` and `The Boys are back in Town`. After 45 min the audience is indeed warmed up and Lizzy leave the stage with the promise to return.

Setlist: Are you Ready, Jailbreak, Killer on the Loose, Whiskey in the Jar, Emerald, Suicide, Rosalie, Black Rose, Cowboy Song, The Boys are Back in Town 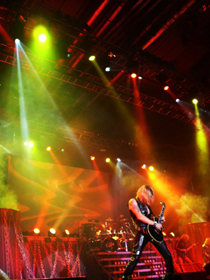 Exactly at 22:00 the lights are up for the second time and Judas Priest enter the stage. As an intro they have chosen ´War Pigs´ and ´Kings of Metal´, which both fit extremly well to this evening. Then they start their set with the fast ´Rapid Fire´. A perfect beginning which is even improved by the following ´Metal Gods´. The following setlist is a journey though Priest´s extensive discography and it covers every single album (only those with Halford) with at least onesong. Certainly, there some minor points of critism concerning the choices (Why do they play the weak ´Blood Red Skies´ of “Ram it down” and not the much stronger titletrack, and why do they play 3 songs of “Sin after Sin” and only 2 of “Painkiller”?), but there is something for everybody, and the setlist actually satisfies everybody here tonight.

While the vocal performance of Rob Halford at last year´s Wacken Open Air was extra-ordinary, it remains the only reason for critism today. Sometimes he is quite a bit off tune and the later it gets the more problems he has withreally high tones (´Painkiller´ or ´Judas is Rising´). But in comparison his stage acting is really great today. Especially his famous robot moves during ´Metal Gods´ really kick ass.
The performance of Glenn Tipton is also quite different to WOA. While he acted strangely restrained back then, he now plays really enthusiastically and communicates a lot with the audience. He also loves to interact with the new guitar player Richie Faulkner. Really great today!

The other 3 guys just act like always: Ian Hill bangs himself into Nirvana but has the movement radius of a sardine in a tin can, Scott Travis works really great at his drum kit and also shows some cool tricks, and Richie Faulkner has just the coolest and most amazing stage acting with his guitar ever. I hardly hope that he will remain a part of the Metal scene when the final curtain for Judas Priest will fall some day. All in all it is a nice show today, which is only a little bit weaker than the one in Wacken. It is kind of sad when the last curtain falls because I beginn to realize that for me this was maybe the last show of Judas Priest ever. They will leave a huge gap in the Metal scene!

STALKER unfortunately did not receive a photo permission; many thanks to Carina Ullman, who donated her snap shot of Richie Faulkner at the gig in Helsinki 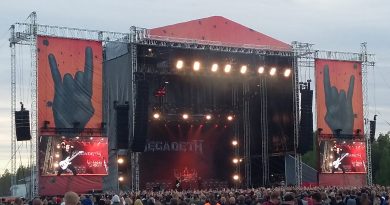 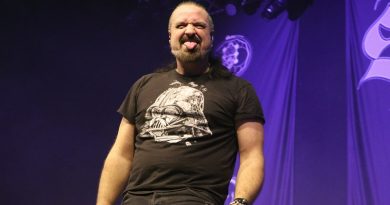 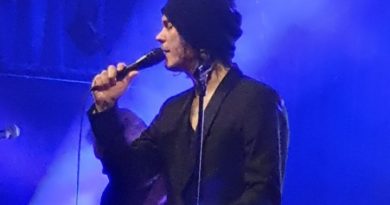