When you are near the Arctic Circle and happen to encounter hundreds of sea gulls and thousands of people in a field, you might have discovered Simerock Festival. The most Northern of Finnish festivals, where the summer sun never sets, where elks and reindeer roam, in the beautiful city of Rovaniemi. And it´s already the 7th time that Samuli Yliaska aka Sime invites to Simerock.

Friday, July 10,2009
The luggage full with winter clothes and rain coats we arrive in Rovaniemi, because of our experience two years ago around the same time of the year, and back then it was icy cold and wet. But we were wrong – the weather could not have been better, almost +30° C so high up in the north – the perfect festival conditions. Lots of stands offered everything a rocker´s heart might desire (or happens to purchase under the influence of alcoholic liquids, e.g. discovering in the morning that the blond hair under the blanket is disappointingly just a wig and not a hot beauty): chains, flags, hats and sun glasses, followed by endless rows of band merchandise and food – and a compliment to the personell that was always very friendly!

White Flame
are the openers of Simerock 2009, those guys made some impression with their debut album Tour Bus Diaries, toured in Europe and are very popular in Finland.

Profane Omen
While on Tivoli-Stage it´s time for Järjestyshäiriö, we check out Profane Omen, where Jules Näveri challenges a short rain shower with his powerful-as-usual voice.

Anna Abreu
Next one is Anna Abreu who became famous 2007 as Finnish Idol runner-up. She convinced with her voice and her swiveling hips, she used the whole stage to inspire the audience. Her songs „End Of Love“ and „Ivory Tower“ excites her fans who scream without pause „Anna,Anna“.

This band must be well-known to anybody who is a bit familiar with the Finnish Metal scene. Mokoma supply the hard stuff on this evening and offer a great show.

The Tivoli-Stage is indeed beautiful, despite the fact that it´s a small place – but the spot is simply unique. The stage is on the water, and in front of it are seat rows so everybody can watch. And every single seat is filled, therefore this one must be the local hero topact. The band consists of former professional winter sports guys, e.g. Ville Kantee, nominated three times for the Ski WC. This act is indeed worth to be watched and creates high spirits.

For Uniklubi the definition “Rockband” might be too harsh, it´s rather Pop-Rock but still they can kick ass with their well-known songs “ Rakkautta ja piikkilankaa“ or „Vnus“. In the meantime the guys are tattooed from head to toe and found their own style, before that they have rather been a Finnish-lyrics HIM rip-off. Uniklubi „rock“ for us that night before we go out for reindeer hunt, we need something to eat before we return home.

Saturday 11,2009
The second festival day starts already at 12.00 and some might have had a hard time to get out of their beds, but a few manage to be in the area by then.

Öppnäs Här
„Open here“ – why on earth did those guys choose such a band name? The band is still quite young and their music a question of taste – unfortunately not my taste. But they are quite cute with their curly hair.

Pete Parkkonen
An absolute whirlwind on stage and difficult for photographers, as he doesn´t stand still for a second. The 19 year old can indeed convince with his voice. No wonder, he (almost) won the Finnish Idols contest last year and entered Finnish Charts with his song „Girl in Uniform“.

Deathchain
This Deathtrash Band has drawn a lot of Metalheads to their stage, but those still seem tired and somehow cannot really get moved.

In the meantime 3 years had passed and now that band is just great. TK offer a unique show and music of the same category, you will be stunned. A nice cameo was the appearance of the Deathchain guitarrist as a slave on stage, and he got hit with a belt. As he seemed to enjoy it – he received two more slaps.

Paula Koivuniemi
She is among the biggest Finnish soft pop stars, and this woman has so much power with her age of 62, she can easily keep up with the younger ones. Most poeple in the area have probably come to see her. Paula has a lot of charisma and keeps the audience captivated.

Happoradio
I just like the band because they have this bulldog, in their videos or on the CD cover, it´s their mascot. Musically they are in the Pop-Rock area, and songs like „Che Guevara“ and „Hirsipuu“ are well known and sung along by the audience.

Kotiteollisuus
They belong to Finnish festivals like beer to the Finns. . Mr. Hynynen walks on stage in tight Jeans and Cowboy hat, charming the ladies with his wicked smile. The songs arouse the audience and the band alike, therefore you can soob spot Hynynen and Hongisto tongue-kissing, how cute it looks when such guys go canoodling, ha ha. This is definitely the right main act for a Saturday.

Sunday July 12, 2009
Sunday morning belongs to the little ones. Jytäjyrsiijät play music for kids, and Siscott are two girls who are on the best way to become Finnish superstars – the sisters Tähti and Helmi are 10 and 11 years old and just cute.

Alamaailma
open the last festival day for the bigger ones and convince with their music. One of them is Simerock co-organiser Marko Salo. The guys rock the stage and the still tired audience that seems to have had too much party the previous night.
After that Finnish Punkrockers Klamydia take over More photos in the Simerock-gallery, link above!

What would a festival be without the handsome Stam1na guys? For the Metalheads in the audience there couldn´t be a better festival round-up than those 4 guys and their music, provoking a huge moshpit – and after that there was still PMMP, but we skipped them.

Summary:
You must say that Simerock Festival improved a lot in comparison with 2007 (see our review), and despite a few organisation and communication problems the festival was great. Every band had 1 h playtime in a picturesque surrounding. The weather was fantastic with + 30C°, therefore you should consider a summer trip up to the North next year to get a ticket to this festival next to the Arctic Circle. 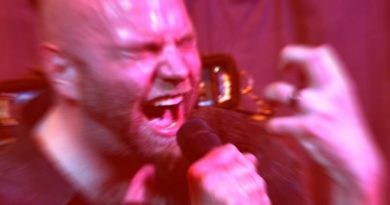 Nightwish: On A Dark Winter’s Night 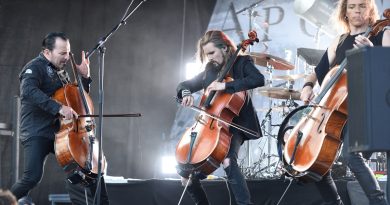