The bands playing on Tuesday, Wednesday and Thursday didn´t unfortunately make it to this review, as STALKER couldn´t travel to the Hole In The Sky festival before Friday. A shame, as the line up for those days featured bands such as The Batallion, Manngard, Immolation, Secrets Of The Moon and Napalm Death who all, like festival visitors told us, took no prisoners in the hopelessly overcrowded “Garage”. You should not miss any day of this festival…

Because of a mistake on our behalf, STALKER didn´t get a photo pass this year, but the Hole In The Sky – team helped us out with photos by Christian Misje. Thank you for that! To be able to present you the usual photo gallery, we have put online a few pictures of the “surroundings” of the festival: Bergen that is. As Bergen was it´s usual self this year – rainy – the pictures are from 2006. 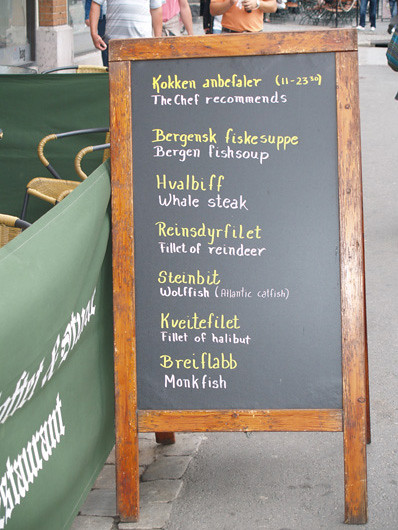 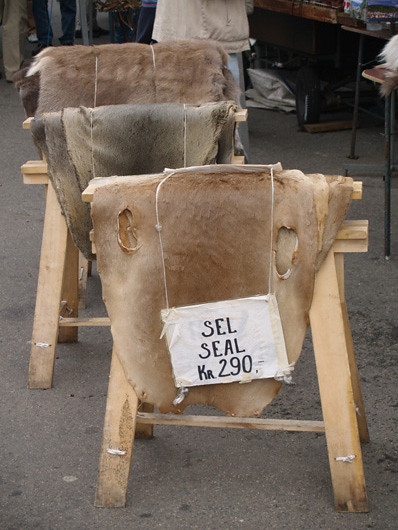 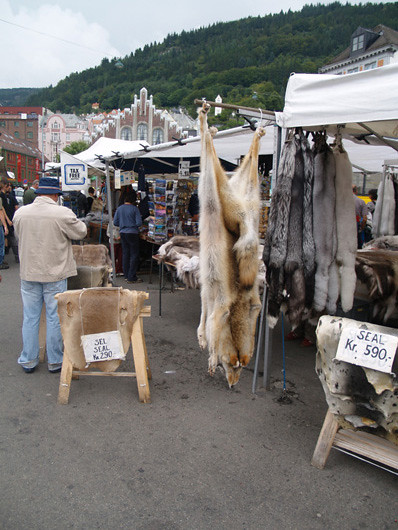 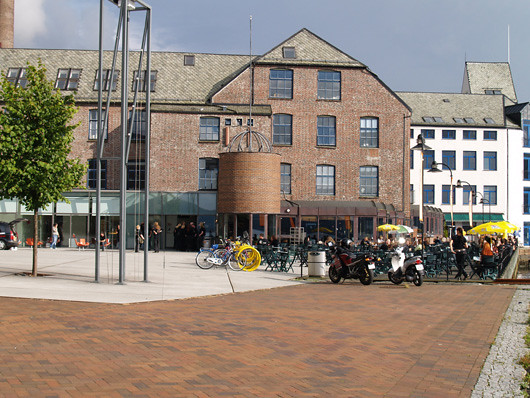 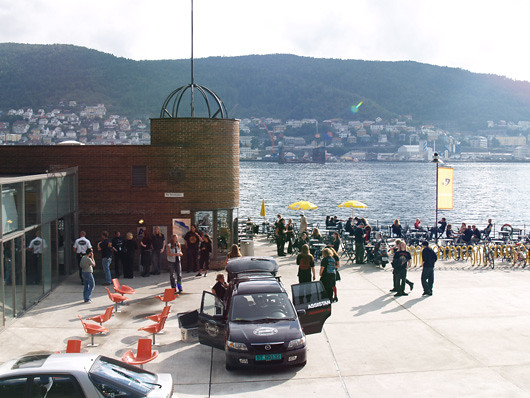 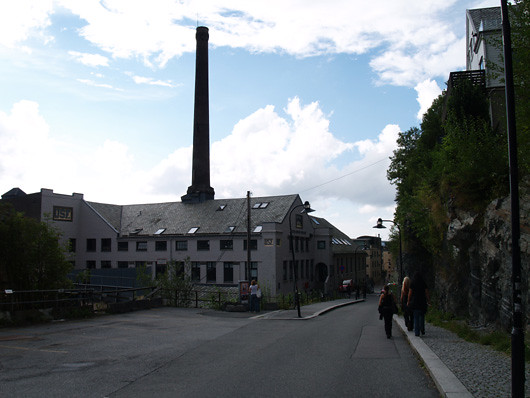 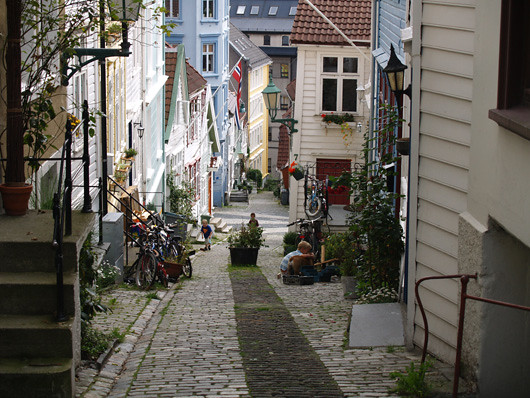 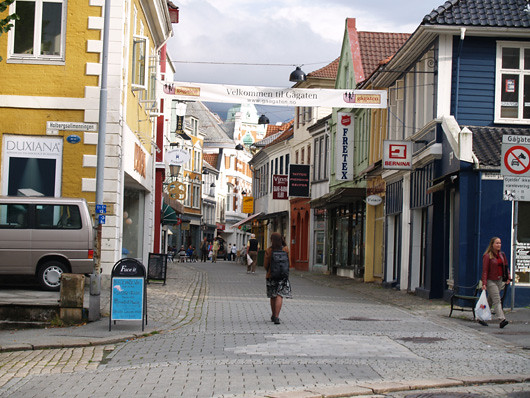 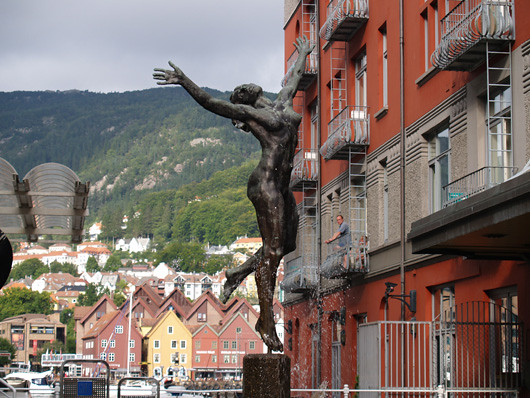 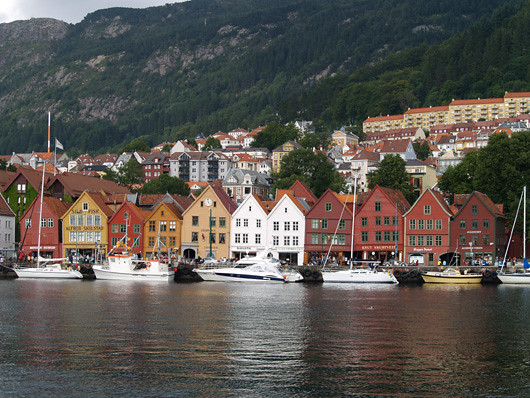 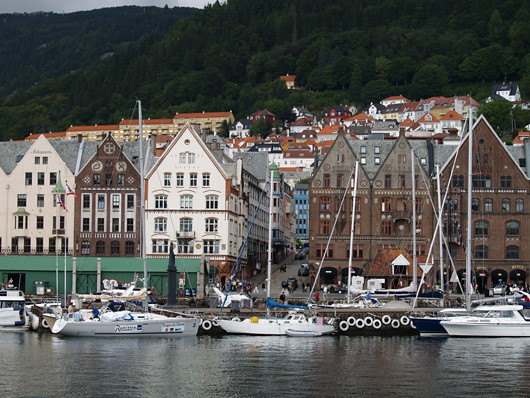 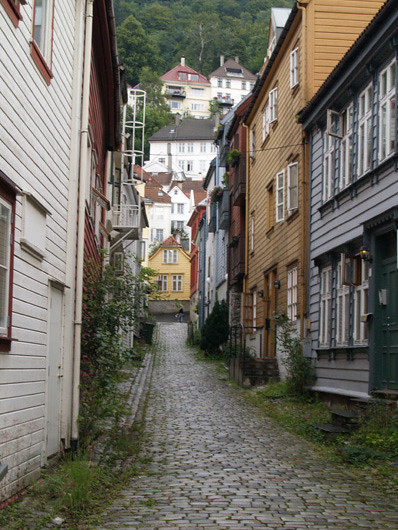 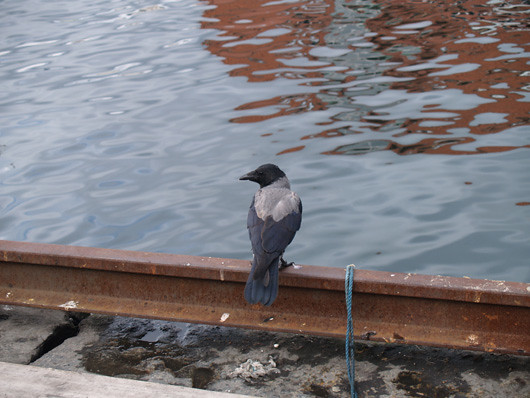 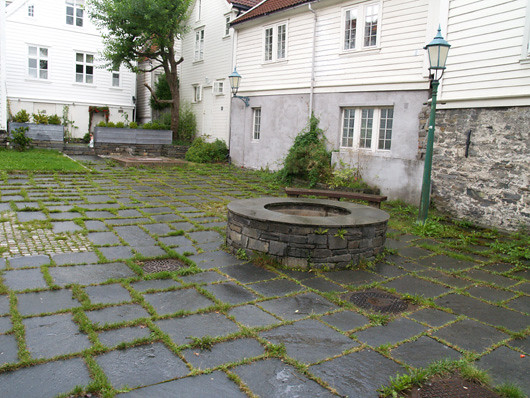 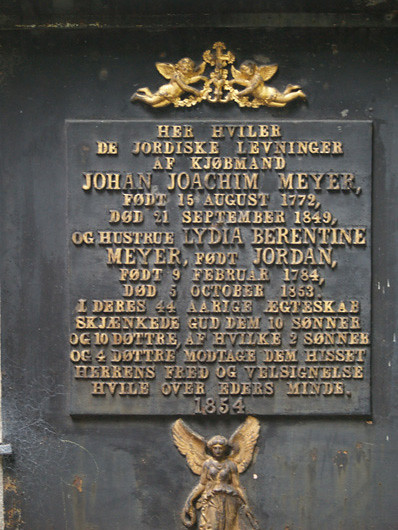 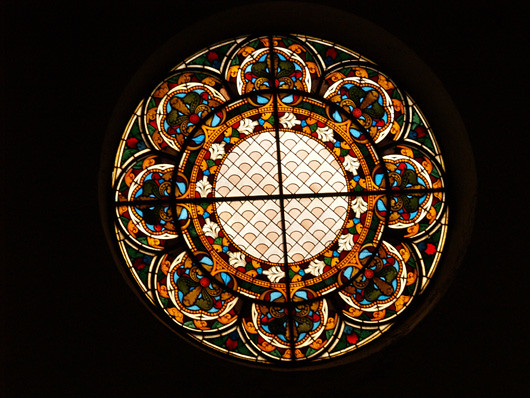 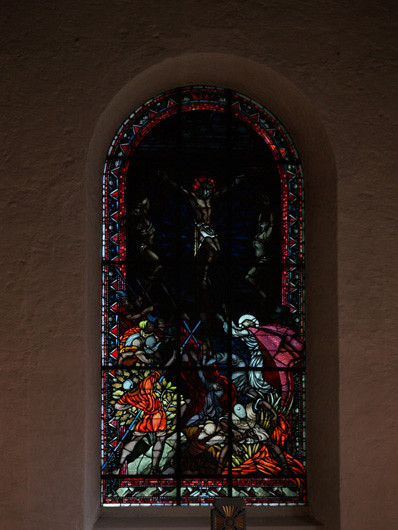 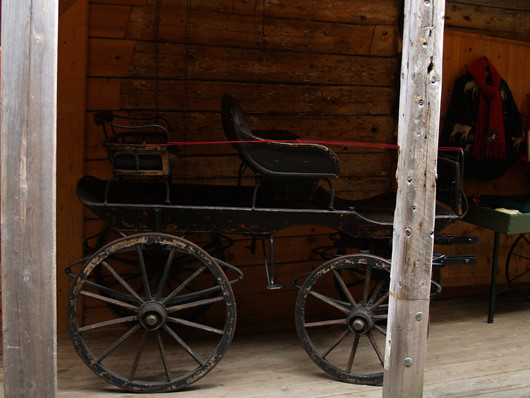 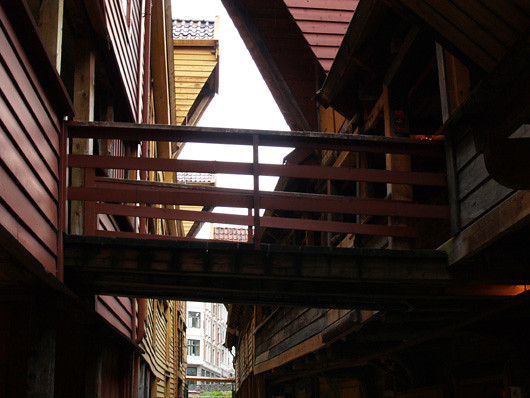 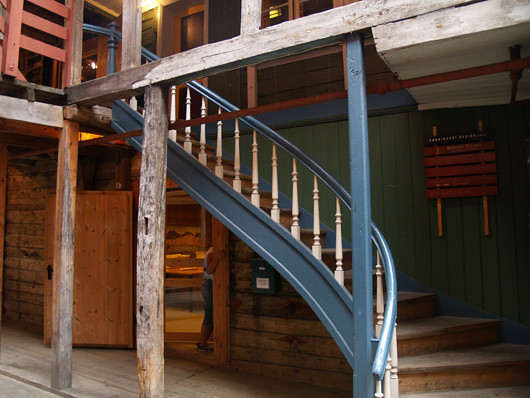 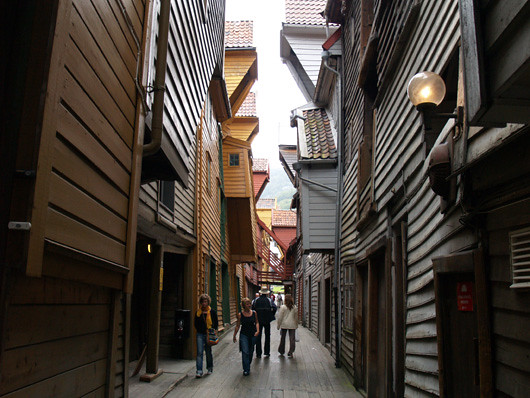 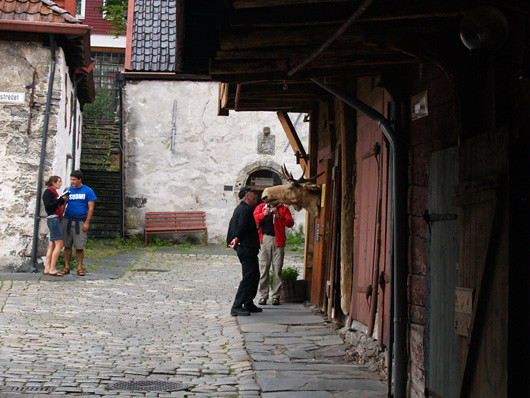 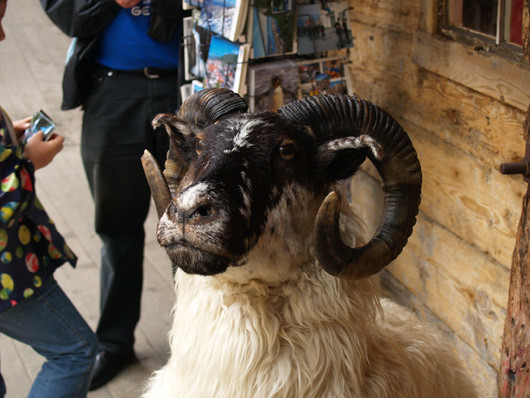 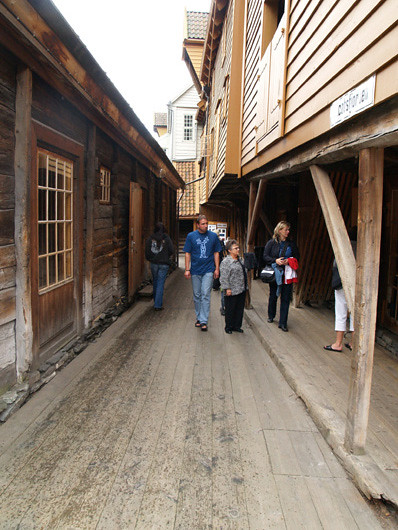 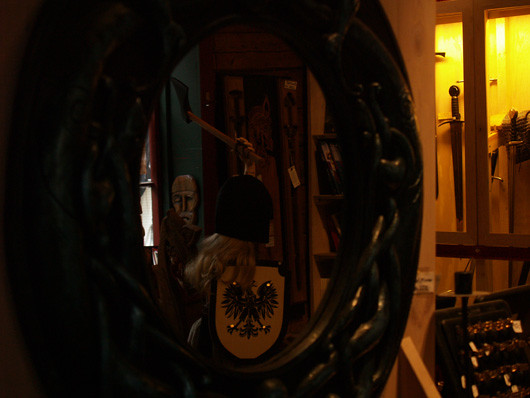 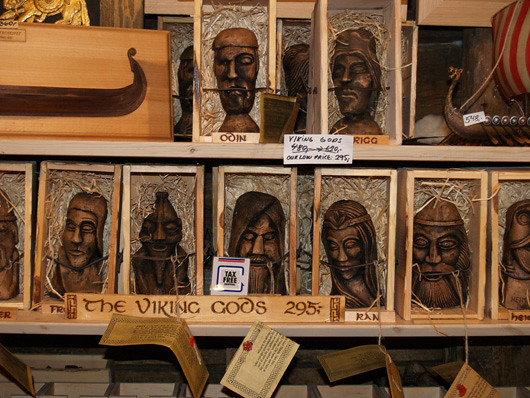 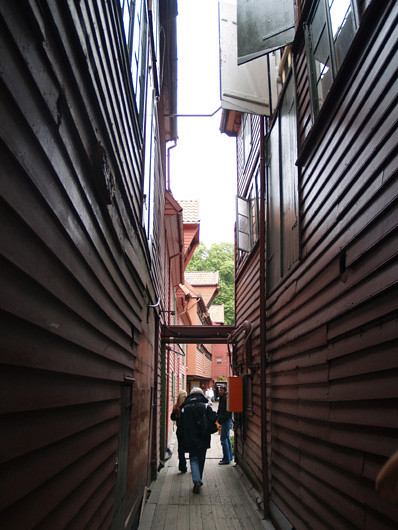 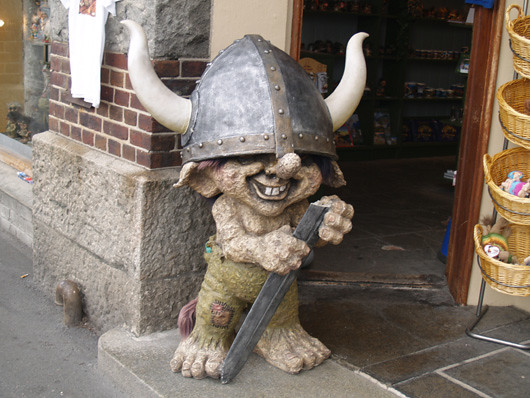 The translation from Hebrew to English of the word Melechesh is „King Of Fire“. They are, together with Orphaned Land, the only ones I know so far who combine their oriental influences with metal. Whereas Orphaned Land is relatively soft, Melechesh is brutal and ready to crush the ears of the already big and alert crowd, with their “Mesopotamian Black Metal”. These gentlemen from Jerusalem are still fairly unknown in Germany, but that will hopefully change soon. (eb)

Anaal Nathrakh are heavy, like all Season of the Mist bands. The Brits with the slightly naughty sounding name, which actually comes from the „Excalibur“ movie, have a real beast behind the microphone in Dave Hunter. Even if Anaal Nathrakh didn´t really make sparks fly for me, they certainly struck a nerve in the moshpit (called USF) with their Grindcore Black Metal mix. Great atmosphere! (eb)

The Austrians from Belphegor damned again everyone not fast enough to take cover and settled old scores with God and church. The singing still sounds like little mean Schwarzeneggers whose lollypops have been stolen. These silly fellows are completely overrated and ridiculous, but you just can´t stop watching and listening and therefore watch the show with a fascinated smirk on your face. Really funny! (eb)

Holy Shit! This was stunning. Entombed played with just one guitar, which made me a bit sceptical beforehand, but what the Swedes with the great merch t-shirts had to offer was by far the best show I´ve ever seen from them. With true passion and obviously enjoying themselves they presented a wonderful mix of oldies from „Wolverine Blues” and the new „When In Sodom“, without forgetting “Revel In Flesh“ and „Left Hand Path“. Alex Hellid can without a doubt hold on to his title as „Master Of Death“. The whole crowd seemed to feel with me, that the rousing show was way too short. Entombed was surprisingly my highlight of the festival. (sa)

What does an evil band do, when they aren´t able to shock the audience with blood and pigs heads anymore? Mayhem was proudly announcing before the show that they were going to do something that had never been seen before – and they were right. Atilla was dressed in a mummy costume and there was a coffee table on stage. Between songs the band gathered around the table for coffee and light refreshments while giving an interview to the local MTV. Very strange and surely unique. So the concert became really fast the side program of the side program, which was a pity as it was completely okay music-wise. Well… (sa)

When the San Francisco Bay Area – legends initiated the end of the evening, there was really Mayhem on stage! Testament were able to book this day together with Entombed as a success as a whole. I guess there was something in the air in this overcrowded venue, as this quite usual concert ended in a real happening. Sometimes the stage was so overpopulated, that it was hard to make out the band itself. Okay, the choice of songs was very good with a lot of old hits, but the show wasn´t as good as this splendid chaos in the audience let to believe. Anyway, Chuck Billy and his companions are back, even if they showed some light symptom of fatigue in the end. (sa)

To view the report about the listening session of the upcoming album Le Fol (released in Norway 25. August 2007) have a look here.

To read the whole thing have a look here at STALKER.

Put together body paint and some spikes, nails and other crap and you get the Nifelheim style. As Dany Filth or Caligula with their bellies shouldn´t really squeeze themselves into their skin tights anymore, also the Nifelheims should think about some new outfit as they are no youngsters anymore. On the other hand it would take the fun away from watching them posing. But apart from the exterior, what the Swedes were offering music-wise was with some Thrash Metal elements pimped up old school Black Metal, which the Bergen audience celebrate enthusiastically. (eb)

Bloodthorn, who have change from violent Black Metal to Death, probably brought a big fan base with them from their hometown of Trondheim, as the first rows seemed to be there exclusively for them. But with the songs from the current release “Genocide” they were able to attract even new fans. This obviously cheered the band to play an excited and straight forward gig. But I still have to say I long a bit for their old style. (eb)

With such a personal style, which is an interesting Thrash/Black/Death mix, it´s really impossible to compare Deströyer 666 with any other band. The Aussies played a good blend of old and new and had the audience quickly won over with hits like „Predator“, „Genesis To Genocide“, „Black City“ and „Raped“. (eb)

Thrash Metal from England? Does it still exist? I really asked myself that question as I hadn´t heard from Sabbat for such a long time and as Walkyier´s solo project was so dead, I thought it´s over. But: the reunion world keeps spinning! And even if the audience at Hole In The Sky was grateful, this band belongs to those who should have stopped playing. Some warmed up stuff won´t get hot again. (eb)

Kreator hadn´t played in Bergen for three years and they had certainly been missed, because when the Ruhrpott-Helsinki-Thrashers started their intro, the house was packed and a moshpit was formed immediately. Mille should already be working on a follow-up to „Enemy Of God“, but he just seems to be too keen on touring. With a lot of energy and with the band obviously enjoying it, not to forget the legendary in-between songs announcements of Mr. Petrozza, the atmosphere went through the roof with one hit following the other. Although “Violent Revolution“ was missing, „Phobia“, „Extreme Aggressions“ and „Suicide Terrorist“ still made great sing-alongs. The sound, light and stage appearance– it all came together perfectly. A great performance that left everyone, me included, with a neck ache. Hopefully the band now locks themselves up in the studio to prepare a new release. (sa)

I had already had the honour of seeing the unholy Trinity in action at Wacken, but seeing Immortal also in a smaller club surrounding was exciting to me. As Immortal were the undisputed kings of this years Hole In The Sky, there was no room whatsoever in the USF. Even if the organizers had put effort in a better air-conditioning and big screens, which worked for the other bands as well, it was impossible to see a thing for me. The volume could have been louder, and as I arrived during the first song, the last space left was at the back of the crowd. Therefore I can´t say too much about the actual gig, but after the show you could see a lot of happy faces and messy long hairs making their way to the bar. In dubio pro reo! (sa)

The party was going on, at some wild after parties like this one…

Conclusion: Also this year this uncommon festival in rainy Bergen was able to score high points at STALKER and was actually even topping last year. Cosy, extreme and just great! 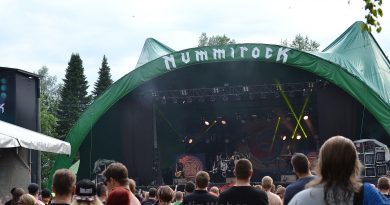