Tampere, first weekend in June. One chapter of Finnish summer. Standing once again on the slowly moving line for Media/Vip passes. Why these things are so rarely smoothly and well organised? Of course it´s important to get paying customers fast inside but still, you want to give a good image of your event? And this so familiar, yet annoying beginning for a festival doesn’t really boost it. We need to see the bands we are writing and taking pics of. But anyway. Here we go.

Friday
Due before complained issues we got inside to see last part of Amorphis’ routine feeling performance. Considering the early playing time Amorphis worked nicely and offered set list which didn’t surprise in any way as the song choices followed a familiar line. Only couple of songs from new record gave changes for set that they played at last record’s period. And only the early birds know what they did in the first part of the gig…

After Amorphis it was time to check out 45 degree woman and grab our first beers. If this band would have used as much time on fixing up their songs as much as practising ”cool” poses, it would have been really top class. Electric parts in the middle of the songs had their moments and I personally hope that in the future they would mix more that kind of material into the otherwise meaningless and tasteless rock-parts. But anyway it worked as background music for drinking beer.

More photos in the photo gallery, link above!
Duff McKagan´s Loaded carries itself in the shadows of Guns N´ Roses. Couple of GN´R songs and few covers which also GN´R played were the highlights of the gig. Especially Misfits Attitude rocked!!! Duff’s own songs were more boring one riff rock. And of course they had to get Mike Monroe on stage for a couple of songs. Partly entertaining, partly boring. Like GN´R was in the old days.

Hold the sign of the evil grapefruit high! Medeia had really big boots to fill and they served it pretty well. Meshuggah – the reason this Stalker team even attended the festival – cancelled only a few days before d-day. But Medeia was really delightful, it was cool to see them play live with good spirit and lots of attitude. Musically not the most imaginative band, but they cover it with innovative moves on stage.

More photos in the photo gallery, link above!
Soilwork´s bassist is the only interesting thing on the band in any area. At least he´s rocking on his own reality whilst the other members satisfy on typical metal poses. In my ears their music is wannabe rough riffs mixed to dance melodies from Swedish Midsummer Day’s parties.

Viikate has really found the essence of Finnish melancholy. And they are the only band on stage who can keep their hair stringed and glasses on at a metal gig. The performance was eased and songs well played. Viikate’s show was the one I mostly enjoyed on Friday and it became one of the few highlights of the festival.

More photos in the photo gallery, link above!
Apocalyptica started their set traditionally with Metallica and the second song was surprisingly (at least for me) Sepultura’s Refuse/Resist, which was an actually quite interesting cover, for choice and for performance. The live show was energetic and quite amusing. This band really works when it gets darker as their light engineer really knows what he/she is doing.

Saturday
Due to many different and meaningless reasons Saturday started for us while Sturm und Drang was ending their set. The weather was quite the same as it was on Friday, the only difference was a lack of constant rain and a dash of sunlight. It was quite obvious which band the crowd had come to see, as there were loads more audience than on Friday. Organisers had kindly foreseen it by raising the one day’s ticket price for Saturday.

Inflation hits everything these days. And this “promising” boy band haven’t been spared either. Sturm und Drang stands by same (cover)songs which raised them to main stages year before. But don’t get depressed. It’s the name of the game in the phenomena industry. One day you’re in and one day you’re out.

I saw Poisonblack live at Tavastia last year. And I have to say, the gig in SOA was disappointing compared to their performance on a club stage. Energy had changed into pointless standing and empty posing. The only exception was the keyboarder, who at least tried to be energetic and kept moshing and hugging his instrument.

More photos in the photo gallery, link above!
Maybe there were some hang overs up in the air at this time of the day, or maybe big stage was too much for these guys. Maybe a smaller stage would have given them that little boost for intensity their show demands as I have seen it before. After this show is quite clear that the rest of the band should be graceful of their front man who is, who he is… Without Ville Laihiala they for sure wouldn´t be playing on main stages.

Prestige, a name from the past. The older festival visitors might still remember these energetic thrashers who took a time-out in the beginning of the 90s. It took over a decade before they finally entered the stages again last year, and well, they also showed a bunch of younger bands how to put together a decent live performance without crinkling the forehead. The gig started with a few technical problems which were solved fast with smiles on the faces. Prestige might not be the most original band, but hey, which thrash band is??? They for sure were one of the most interesting things happening on SOA´s stages on Saturday.

More photos in the photo gallery, link above!
If you had to describe naivety of heavy metal then you could show a part of Hammerfall’s gig. From the first notes the stage was filled with unnaturally cheer and cheesy curling metal. Being on stage is quite natural for Hammerfall and they had attached mandatory Spinal Tap moves, catwalk poses and Harley Davidson samples. Despite this, I didn’t find collective brotherhood of metal in me. Anyhow it seems to be quite successful with people who are into this kind of stuff.

Before Finntroll’s show we had a chance to prove interesting vocal-noise-performance of one Finland’s well known folk orchestras’ guitarist. Thank you Mitja for entertaining us whilst waiting for the Trolls. The gig itself was quite good and one of the most dynamic as it comes for Friday and Saturday. Thank you´s go especially to Trollhorn; there´s a keyboarder who knows how to draw one´s attention.

More photos in the photo gallery, link above!
It was a shame that Tundra suffered from bad technical based bass problems but at least the dancing audience didn´t seem to care. Next time they should be allowed to play on the main stage. For example instead of Poisonblack.

And at the end of the day, the coolest rock band in the world entered the main stage. Or did it? This shabby/dowdy bunch of “rockers” moved like elderly people and the singer sounded like he had a rubber duck in his mouth. I can’t say anything how they played the songs ‘cos there were so much material playback. After a few moments of the Mötley Crüe’s set there were no second questions why the photographers weren´t allowed to shoot from the photo pit – like during all the other bands – but they were dragged into the middle of the field where only high quality tele zooms were useful. Over and over played and almost historical hit songs and pointless and boring crowd shouting parts blinded the audience and at least most of the people seemed to enjoy it. Maybe that’s the only reason why these things are artificially kept alive.

More photos in the photo gallery, link above!
Outro: We enjoyed the festival even in the rainy and miserable weather with dash of sunlight for two days. We had to pass Sunday because of working related issues. The balance of these two days was that small stage had better performers and we got the feeling that the larger stage had mostly bands who sold with their name and gave really nothing much for the show. But that doesn’t really matter for consumers who are satisfied to hear their favourite radio songs outside for a change. And we also noticed that bands, even ”big” bands, who were playing this year based their set quite a lot on cover songs. Or maybe we just haven’t noticed that before. At personal level most of the music didn’t match our musical tastes but the festival itself was fairly good organised. Except the ridiculous beer/cider prices, 6 e is just too much… 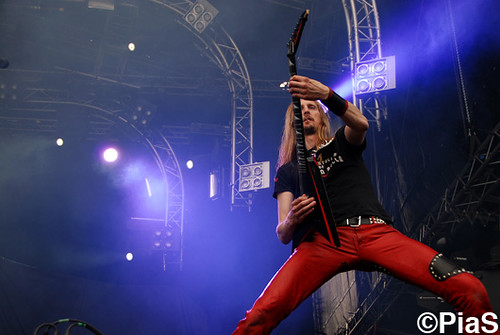 Dunderbeist: No matter if crazy or sane