Kaltenbach Open Air, having its fifth anniversary this year, is part and parcel of metallic Austrian summer events. The Austrian cliché location adds even more unique features: Right in the middle of a forest near Spittal/Semmering (near Vienna) Metal heads from the Alps and from abroad gathered again. I like it because of all those underground bands from Austria and beyond.

It was easy to find the festival area, we had to pay 2 Euros per visitor in our car for trash bags and then we could start to look for a parking place. That was difficult even in the afternoon, so we ended up at Schieferwiese, an area with 15 % slope, before we could rush down to the stage, right in the center of a clearing in the woods. Not bad, because the trees blocked off the sun.

The first band Goddamned X I could see only for 10 min, but they convinced me with their Death Metal. Afterwards I heard that this band also hosts members of the Kaltenbach organisation team. I don´t want to comment Sarkom, to me a totally unknown Black Metal band from Norway, because I don´t like this kind of music. Goreotted were much more to my taste, grooving Death Metal from England. The fans defied the heat and banged, even the first stage diver could be spotted.

Tyr had arrived in an old mini van with Faröer Island slate, and more and more Tyr merchandise bearers gathered in front of the stage. The band would fit nicely into medieval festivals with camp fire atmosphere, but I did not feel like doomy Follk Metal as this sound makes me sleepy.

Dornenreich alias Eviga and Inve had invited some guest musicians who I did not know, only the bass player looked familiar (Vision Bleak?). Personally I had not had much interest in that band before, and that day it sounded like Opera due to guest singers.

Finally something for my ears, pretty rhythmic Death Metal by Zyklon who created a diabolic atmosphere with lots of red light on the forest stage.Legion of the Damned bored me, so I checked the catering area. Prices were OK, Indian food was available for 5 Euros, beer for 3, and the devil himself served Met and sweets.

Sitting somewhere in the area I listened to Belphegor and longed for coffee, because fatigue set in, and the headliner was still due, the Black Metallers Dark Funeral around half past one in the morning. After one hour the whole gig became sound pulp so I could leave without bad conscience to get to my tent. There I noticed I had to get up early, because the festival continued next day already at 11 a.m.

About 9 a.m. I woke up, no longer lying on my mattress but in the lower part of the tent, where gravitation had placed me during the night.

Before 11 a.m. the area around stage was still empty, but more and more people showed up… about 20… The opener of that day, the AustriansSepsis provided good Rock for the early morning, followed by Misantrophic Might from Vienna. Conspiracy Unmasked were remarkable because of the Visions of Atlantis singer. Infestigation from Austria convinced me with their technically fine Death Metal with Grind elements.

The heat became unbearable, luckily there was plenty of room in the shadows where you were protected from those deadly rays. Distorded Impalment continued the program, a band I have seen quite often this year, excellent Death Grind. After them the Pagan Metal band Wolfchant from Germany played.

Darkfall from Graz – who also filmed a professional video of their show – had more luck with the sun god who had mercy and no longer burned down on the fans, so more of them gathered in front of the stage. The singer also thanked the audience that had enabled Kaltenbach Open Air to exist for five years.

Mastic Scum are always a hit with their Death Metal, those humble guys just focused on their gig and did not talk much. Sanatorium offered mega brutal Old School grunt Metal without compromise. The singer had an extreme voice, so deep and dry, as if he would have puked his own intestines any minute. But after three songs it got boring, because there was no differentiation, and the songs had all the same simple formula.

Avulsed are a typical underground act, very well known in Spain but not abroad. Especially singer Dave Rotten is a star in Spain, being the boss of several Death Metal labels. Avulsed play perfection Death Metal in the style of Nile, complicated riffs and fast, but not too fast, and ultra deep growls. Remarkable are also the perfectly timed breaks in every second song. The band had to play in open sunlight, Dave joked “we left Spain and the heat behind, and now we have the same shit here”. Funny was also he song 666, Dave announced it first, then handed the mike to a fan who should growl 666, and that´s what he did. Then Dave took the mike again and announced the song again, 5 times deeper and 10 times more brutal. For anyone was clear then that this vocalist indeed masters his voice. For me Avulsed was definitely the highlight of KOA 2007.

Setherial und Waco Jesus were not quite my thing, the latter were quite social and could be seen in the area drinking with fans.

Holy Moses had also an anniversary (25) and played a simply brilliant show, consisting of mostly old songs, in between Sabina made funny statements. Finally fans could enter the stage to sing with her “Too Drunk To Fuck”.

Kampfar were not quite my thing but the show was good. Seeing a mystical looking hunger stick of singer performing in the middle of the night looked quite diabolic.

Rebuilding the stage for Vader lasted really long, I heard that an amplifyer was broken. Finally after one hour, the “Between Day and Night” Intro began – and I can tell you, nothing better than such an intro in such a location in the woods, that gave me the creeps. The faster “Shadows Fear” followed, but people were too exhausted already to form a real big pit. But the sound was perfect. “Predator” almost brought me to tears, it sounded so cool. Just imagine: The singer in the center, left and right bass and guitar players, sinister light in the woods (mainly red and dark green), this cool “Predator” groove and head banging guitarists in the headwind of a ventilator, therefore their hair never dropped but kept floating in the air. That looked great and had some hypnotic effect 🙂 Besides Avulsed the highlight of KOA. Unfortunately their show lasted only 30 min because of the delay.

The Haunted I left out because it was so late and I left the next morning.

Summary:
KOA is a must for Austrians and even more recommendable for foreigners, because there cannot be any more cliché experience of Austria. Mountains and woods, the stage in a clearing, simply beautiful. Negative aspects were the camping location (I did not enjoy sleeping in an angled position), the lack of parking space and showers. Prices and food were average, as well as the sound quality, according to my fastidious ears. But all in all a recommendable festival with a unique surrounding. 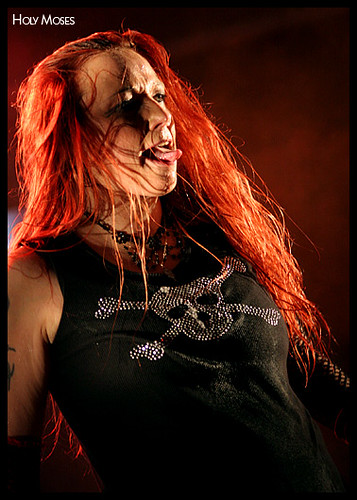