Once again the time had come – Ruisrock 2006. Over three days 65,000 people came to the festival site on the island Ruissalo offshore of Turku with Saturday and Sunday being completely sold out. The mood was awesome and the weather encouraged sunbathing, swimming and chilling – there was hardly a cloud in the sky. Therefore, flower necklaces available in all colors of the rainbow, were the biggest sellers. The only downer was that the final of the World Cup was played at the same weekend and so some music- and football fans had to decide for one. The decision, however, was made easier because the games could be watched at a video screen on the festival site. Apart from the four stages there was once again the Hevi Karaoke stage and a Tribuuttiteltta, in which bands paid homage to their favorite bands live; amongst others Black Sabbath, The Doors, Iron Maiden and Alice in Chains were musically courted. (kg)

As the first band of the festival Saturday SUBURBAN TRIBE entered the Niittylava (Grass stage) at noon. At this early hour some people had already gathered in front of the stage to rock with the guys. Many people, however, were still stuck in the queue in front of the main gate to be granted to enter the site, partly up to one hour in sweltering heat or partied with the Finnish Gentleman version Jukka Poika & Jenkkarekka who, with their reggae on the Rantalava (Beach Stage), put the masses into summer party mood. Because we were a little late we only saw the last minutes of Suburban tribe´s set, which included „Frozen Ashes“, „Untameable“ and „Silent Rain“. The mood was good and there were even some restrained „We want more“shouts. (kg)

And here we go again – The 69 eyes once again! Announced as „the world´s sexiest band“ there was at first a lot of smoke from which the poser kings slowly emerged. As usual with their skeleton outfits they went through their „Best of“ set with songs like „Devils“, „Gothic Girl“, „Betty Blue“, „The Chair“ and „ Lost boys“. Although this time around Jyrki 69 would have had a really good reason to wear his sunglasses because the sun blazed down mercilessly he took them off many a time! The set was as usual, clothes as usual, nothing special but apparently it was Jussis birthday. Alright then! (kg)

The next act on the puistolava (Park Stage) were Danko Jones. Up till now I had only heard their name but I couldn´t associate neither songs nor faces with that band! Quite a shame because they are a really good live band and entertaining in two different ways. Danko Jones is also the (alleged) name of the singer and guitarist of the band and he has a second leg to stand on as a „spoken word“ performer, which is a big advantage at concerts of the band to furthermore captivate the audience. The medically prescribed eye patch was one of the topics at this afternoon and so Danko claimed that the reason for it was too much „handwork“ which, as is generally known, leads to blindness. But because he didn´t want to bear his fate alone he invited the crowd to a „circle jerk off“ with „Who wants to go blind with Danko Jones“? Someone in the audience also had a pirate flag with him, of course with an eye patch, and so Danko had it given to him and swayed it proudly. But, of course, not only Danko´s ocular misfortune was the center of attention but also the music, which rocked the crowd. Danko kicked some serious ass with songs like „Sticky Situation“, „Invisible“ and „First date“ which you could and had to sing along after only a few seconds without even having known the song before. Excellent! (kg)

Back to the Niittylava where Disco Ensemble gave their all. Here is once again a Finnish band who can make it also outside the Finnish borders and thus they were already enjoying success for example in the UK. I think I even heard a little proudness of those home-grown heroes in the crowd reactions that day. Their success is not without reason because singer Miikka Koivisto reminds a little of a young Adam Lazzara from Taking Back Sunday when he rompily runs over the stage and does his best. For the first time I feel that the ground under my feet starts to shake when the masses jump along. Musically the show is already quite professional but the announcings between the songs have to be practiced a little more. (kg)

„Gypsy punk“ that´s what I had heard about them before and I didn´t really know what to expect here. Can this combination really work and if so, how? First six musicians took to the stage with such unusual instruments like accordion, violin but also guitar and bass and kicked off the show as is right and proper for rocking gypsies. The band actually hails from New York but some of the musicians are immigrants from East-European countries; thus charismatic singer and boss of the band Eugene Hütz comes from the Ukraine. He´s also the main focus point of the show and knows how to delight the crowd with his dancing and Ukrainian vitality. As if there wouldn´t be already enough action onstage Eugene soon asks two dancers to the stage who, in the course of the show, resort to kettledrums and cymbals to animate the masses even more. What´s offered here is good mood music with heavy guitars and gypsy flair and so it´s no surprise that soon a conga line forms in front of the stage, which unstoppably breaks its way through the crowd. People dance, are in high spirits and Eugene even mingles with the people close to the stage. A band made for a festival stage like this! (kg)

Like every year The Rasmus once again played on Finnish festival stages. Of course, there are the usual scream-teens in the first row and I feel the earth shake under my feet even more dangerously then before. I´m not a Rasmus expert but I was a little puzzled that Mister Ylönen now performs in Army-green clothes and not clad in black like I remembered it and also the often-mocked feather in his hair was gone which considerably improved the overall impression. All songs known to me were played like „ Falling“, „In My Life“, „Shot“, „Guilty“ and of course the „whoohoo whoohoo song“. The mood was especially good for the known songs but somehow not as fanatic as you always read from German concert reviews! (kg)

The last band of the evening was for me Flogging Molly but at this point I was already so done that my mental capacity was possibly a little impaired. But what you could easily see was that the people loved Flogging Molly! The mood was awesome, people danced in front of the stage, in the beer areas and even in trees that were clambered for a better view because the band had to play on the quite small Paviljonkilava (Pavillion Stage) which apparently wasn´t big enough for the onrush of the party-loving fans. With their mix of Irish folk and rock they exactly met the taste of the masses. On this evening we all were a little bit Irish! (kg)

When I went to the media pit for Amorphis the security said „without ear plugs you can´t go there“ and then you weren´t even allowed to go too close to the stage because of all the pyro- and fire effects. Those precautionary measures forshadow big things to come. Ear plugs – it gets loud; distance – there´s also something for the eyes and the fire extinguisher was also already on hand, just in case! The last time I have seen Amorphis was with their old singer Pasi Koskinen and so I wondered how the new man on the mic, Tomi Joutsen, would fit into the band. He did it pretty well and gave the band a whole new character. Besides clean vocals he´s also master of growls and you ask yourself where the guy with the Rasta hair takes it from. Classics and especially the singles „House Of Sleep“ and „The Smoke“ from their latest album were particularly well received by the crowd. The use of the flame throwers was well done, the pyro, however, was not so fitting. (kg)

The Backyard Babies then had the difficult task to play their set at the same time as the World Cup final was broadcasted. It seemed that most of the people were rather interested in football than in the Swedes because the space in front of the Niittylava was only sparsely filled. But of course also the Babies have their teen die-hard fans who lapsed into Rasmus-like scream attacks when the band took to the stage. The band itself gave their all and especially Dregen played once again with body and soul but the show didn´t really ignite. Although Nicke and Dregen more than once tried to animate the crowd with shouts like „Are we in Sweden? You guys are supposed to be loud!“ the people pogoed only to hit songs like „Brand New Hate“ and of course „Minus Celsius“. What a shame! (kg)

The crowning finish of the festival should then be the performance of Tool. The expectations were high; I had read several concert reviews about them and some scribes were enthusiastic, others thought the show was too impersonal. First of all you have to say that the volume was turned up to 11! Maynard James Keenan was standing in the background on a platform in front of one of the three giant screens, which showed video sequences in typical Tool style. To the songs the Tool singer staged free dance like movements while the other band members stood on their spots and performed their musical day resp. night work. The video screens go, of course, perfectly with the overall concept of Tool but in between the songs nothing really happens, neither on the screens nor on the stage, and the guys look a bit lost here. Maynard himself only deigned to quite monosyllabic comments like the usual „thank yous“ and „new album, new songs, huge in Belgium“. You had a little bit the impression that he would rather be in his vineyard in Arizona than to play at Ruisrock! Nevertheless a fascinating performance with songs like „Schism“, „Lateralus“ as well as „The Pot“, „Vicarious“ from the new album „10,000 Days“. (kg) 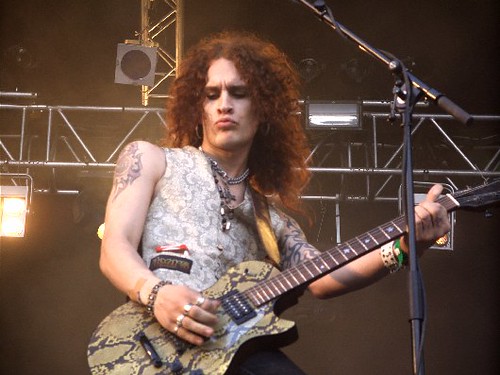