Every year before Xmas the best bands are on tour and it’s difficult to choose which ones to watch. Last in Line I haven’t seen before and I’m curious how those famous musicians pay their tribute to Ronnie James Dio.

Unfortunately there are not so many people at Z7 and a part of them are friends with the support act from the region, Fire Rose. They have had the opportunity to support big bands at Z7 and they deserve it. They are one of the best Hard Rock bands in Switzerland which you should definitely check out. Fire Rose deliver action on stage, topped by the excellent voice and devotion of singer Philipp Meier. The band seems a bit nervous as their schedule is tight and they want to put as many songs as possible into it. Still they interact with the audience and quite successfully to get fans to sing along. The only thing I don’t enjoy are the guitarists hiding behind their microphone/water bottle stands, doesn’t look good on photos.

The stage built for Last in Line takes a while, but tonight with only two bands and a headliner 90min set it should not get too late. The band opens the set with «Landslide» and continue a brilliant set list with Dio classics: «Stand up and Shout», «Holy Diver», «Rainbow in the Dark»,»Don’t talk to Strangers» and «We Rock». In my opinion Andrew Freeman (Offspring) sings Dio songs way too clean and I’m missing a bit of dirt in the voice – which does not mean he’s a bad singer. For me the bass player  Phil Soussan (Ozzy Osbourne) is a pleasure to watch and he is often taking over the stage with his charisma. Drummer Vinny Appice (Black Sabbath) and Guitarist Viviann Campbell (Def Leppard) seem to enjoy being on stage and are all smiles. A great concert that reminds you of all those great songs that should not be forgotten. Fantastic music is a great conclusion of a hard work day. 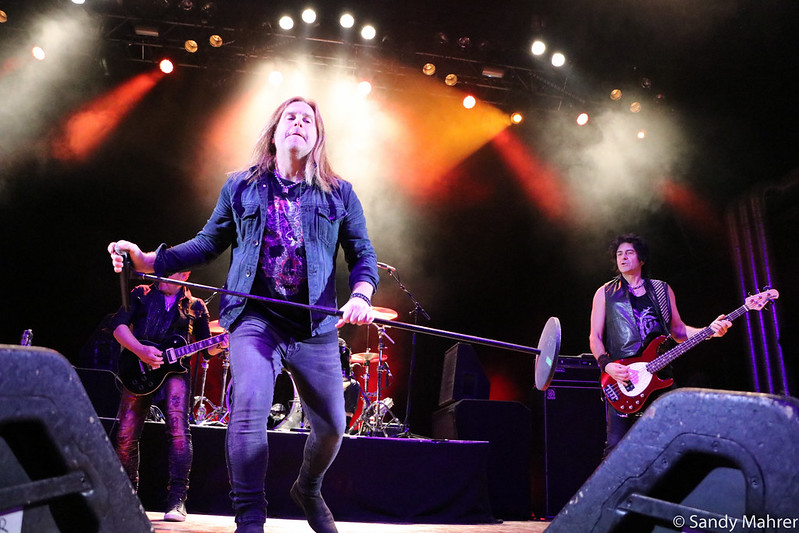