Fantasy Basel – The Swiss Comic Con celebrates a small anniversary this year. For the last five years, it has been the meeting point for gamers, Cosplayers, film and comic fans or in other words, the place to see and being seen. The venue, Messe Basel, provides appropriate locations on three floors and two halls and the organisers planned in such a way that there‘s a special experience waiting for the visitors behind every corner. Lots of panels, cooking shows, workshops, shows, talks and Walking Acts made it hard to decide where to go next, so basically you don‘t have any other choice but to be there the entire three days.

For the mini anniversary, the organisers wanted to give the fans a very special Fantasy edition. One of the planned highlights was a Game of Thrones exhibition, including the opportunity to sit on the Iron Throne and have your photo taken. Unfortunately, there was a little mishap and the throne got stuck at UK customs. Next year, the organisers promised, it will be there. Of course, there were many other attractions. Right at the entrance to the halls, visitors had the chance to see Hasbro‘s Transformer Truck or enter Star Wars‘ X-Wing. Just a few steps further, the Swiss Ghostbusters waited for you with their Busters Mobile and the excellent Wasteland Warriors, who took their inspiration for costumes and their unbelievable booth from Mad Max, Waterworld and Fallout. Their stand really looked awesome and the costumes of the members were amazing.

Apart from that, the entrance hall mainly held lots of things that made gamers‘ hearts beat faster: from Nintendo to Playstation and other sales booths, most of the things presented here are about new games and eSport, which you could play here, too. On the many stands, you could buy partly overpriced retro games but also cook books for geeks, new games, controllers or consoles.

While some visitors went straight for hall 1, others were eager to book their slightly pricey fan experience on the second floor. International stars like Natalia Tena, Ricky Whittle, Don Rosa, Mark Hadlow, John Campling, Julian Glover and Victoria Atkin were available for autographs and photos on all three days and most of them were happy to have a little conversation or, simply, have fun with their fans. Those who couldn‘t afford a personal Meet&Greet or didn‘t want to, also got the chance to ask them questions during the talks. Mark Hadlow, who even sang for the crowd, and Ricky Whittle, who got up close and personal with every questioner, really rocked their talks and certainly could win over even more fans. The talk presenters couldn‘t keep up and so most of the time just sat there, smiling, waiting until the talk was over.

Also on the many side stages, there was plenty to discover. For instance, on the Book&Comic stage, readings took place. Especially „Feuer und Finsternis – Eine Schweizer Legend“ by Swiss fantasy author Angelo Nero and S.A. Lee‘s „Die Chroniken der drei Kriege“ (both books are only available in German) stood out. The society of Swiss fantasy authors gave tips for creative writing and Geoffo showed Digital Live Drawing. On podium 1, Bernd Greisinger talked about his Swiss hobbit museum with a walk-in Bilbo house; you could model a dragon head with Atelier Oechsli or get to know some crowdfunding strategies. During workshops, you could, for instance with Claudia Rindler, see how a „Captain America Make-up“ is done or watch a Foam Latex Prosthetic Application and make up demo at the Egg Sisters‘ stand. On the Cosplay podium, well-known Cosplayers showed how to best transform your ideas into reality and how you can make Cosplay your profession. On the movie stage, there were talks with actors and the famous WETA Workshop, which has made costumes, weapons and other props for many productions. There were new trailers of Detective Pikachu and Iron Sky; on the stands, people made drawings and watched cooking shows, at which dishes inspired by Game of Thrones and Co. were cooked or sushi. And you could even have your name written in Japanese – and lots more.

Apart from that, you could find mainly artists, authors and hobbyists on the second floor but also schools, retailers and big companies such as Disney, who greatly advertised their soon-to-be-released Aladdin movie, with a flying carpet and all. You could have a photo of you with the carpet or together with a performer from Toruk, the new Avatar-inspired show from Cirque du Soleil. The main part of the hall belonged to artists. Such as Anne Stokes, who signed some of her illustrations, or Don Rosa, of Donald and Dagobert Duck fame, who, tirelessly, signed copies of his comics and drawings. Present were also less known, amazing painters like Nicoles Art, who makes every movie hero or villain, from Jack Sparrow to Venom, look great from all angles; or Kevin Fitzgerald from England, who produces real masterpieces with tiny brushstrokes and ink. Or freethinker Thomas Schönwitz, who under the name TurnFireTom, creates strange and unique objects and machines. Or Simon Schmid, who unites his photos with modern art to fabricate real eye-catchers. Or the fantastic UK comic artist Ade Brown, who let the visitors have a look inside his Comic/Graphic Novel „Where Angels Fall“ and even had some tips for all young artists around. And there‘s also a band at Fantasy Basel. The Visual Kei band Aural Coma presented their album/video and great merch on-site. You will certainly read more about this band on our pages soon. Thus, in hall 2, there were many awesome and inspiring personalities and if I have had lots of money, I would have bought some artwork from almost all of them.

On the third floor, right under the venue‘s roof, there were many tattoo studios. You could get new tattoo here or donate some money for the Swiss tattoo museum, which is still in the planning phase. Next door you were able to try out some new sport or new games or watch one of the three daily wrestling shows. For the hungry ones, the Japan Village had some real specialties: for instance, black, green and violet icecream. Visitors also liked the Game Zone, in which one was able to play new and old board and card games, as well as the Zombie Walk Zone. The latter regularly caused long queues, simply because everyone wanted to see what‘s behind the barricade. In close vicinity was also the Mediaeval Village, where you could purchase everything your mediaeval heart desires, from necklaces over armour, to headdresses, helmets, flutes, bows and other weapons. Many Cosplay stands, located on third floor as well, offered face-to-face meetings with Cosplayers, pictures, autographs and more.

This year, the number of Cosplayers was extremely high, and their costumes get more and more sophisticated and extravagant. It‘s amazing how much effort and money some Cosplayers put into their costumes and with how much heart and soul they emulate their favourite characters. All Cosplayers, who suffered and sweated inside their heavy, often uncomfortable-to-wear costumes, had to endure lots of work and unbelievably many photo requests at such a convention, definitely earned my respect. At the Cosplay Contest, the best amongst them could win, for instance, a Bernina sewing machine, a Nintendo Switch or a 3-day-pass for the next Fantasy Basel. On Sunday, at the last Contest, a Cosplayer was surprised by her boyfriend. Two years ago, the couple met at Fantasy Basel, the next year, they got together – now, logically, he proposed to her. And, she accepted. Perhaps, next year, we will witness their wedding at Fantasy Basel?

One of the biggest highlights you could only reach via a small bridge, leading to a side hall. Inside the hall, the Swiss Space Museum presented a space capsule, a spacesuit and a seat, plus many, many interesting details about space flight. Also there: the 501st Legion – Swiss Garrison, the Star Wars Fan Props: Project X1 and the Galactic Alliance as well as the Rebel Legion – Helvetica Base. All of it, made this hall part of an intergalactic adventure, including a cruising-around R2D2, Chewbacca, Han Solo, Darth Vader, Darth Maul, Kylo Ren, Leia, many Storm Troopers and a few other characters from the Star Wars Empire – not to forget, a giant TIE Fighter EP IV, which was, together with the X-Wing, one of the top highlights at Fantasy Basel.

There were many photo opportunities on several stands, very often free of charge, but some asked for a small donation, which was meant to support the group itself or a good cause. I’d suggest, the groups install their own camera (photobox), so they could immediately print the photo and request a small sum for it. That way, the groups earn some cash and fans get a well-illuminated photo, for which they happily pay. Generally, Fantasy Basel has too few great photo backdrops, thus, it’s hard to get good pictures of Cosplayers and Co. The lighting conditions inside the halls are not very good, either, and apart from white backdrops, it’s really difficult to find something that does justice to the extraordinary costumes. How about installing different photo settings, for instance?

Another drawback is the lack of bigger rest areas. Especially this year, when it’s cold outside, not everyone was able to find a place inside to sit down and relax while eating or drinking. More seats inside the halls would be a good idea and also the food could be a bit more diverse. Although you could choose from lots of stuff – hot dogs, burgers, raclette, crepes, Asian-style dishes – all stands offered the same food at, here and there, very high prices. There’s still room for improvement here. Otherwise, Fantasy Basel was a great event, crew and security were friendly and helpful. Even admission was better organised than last year.

Summary: Fantasy Basel is an awesome event, only the stands could have been arranged in a more organised fashion and some more rest areas would be great, too. It’s well-organised and has a family atmosphere, where you always meet someone you know and, simply, spend a great weekend. More than 54,000 visitors enjoyed this anniversary edition and, thus, there’s no doubt about the future of this event. Having said that, we already look forward to next year’s Fantasy Basel, which will take place from May 21st to 23rd. 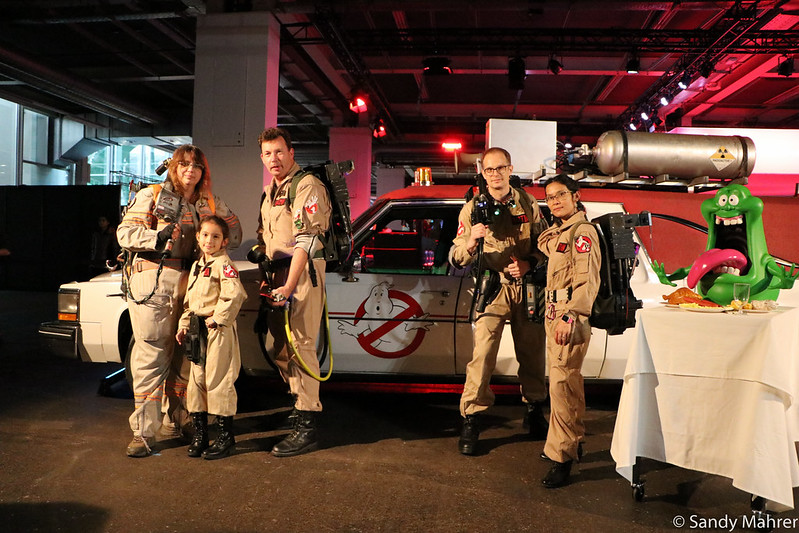