Airbourne’s last concert in Germany in the new Batschkapp in Frankfurt was sold out even weeks before. The Australians – who travelled with support acts DESECRATOR and KAISER FRANZ JOSEF – delivered a grandiose Germany farewell gig for this year.

As early as 17.30 o’clock, many fans flocked to the main entrance and bravely entered the queue. Pleasantly there were tents with heating mushrooms!!!!!! in front of it and also a beer stand and a food truck directly in front of the entrance. The most important aspect … they were open for business!

Just in time at 19 h, the doors opened and everything went well – Security Check, ticket control, cloakroom, beer serving in the hall. Top! The first beverage cups filled up.
Just one point of criticism. The normal beer cost 4 €, but when you ordered a coke / beer you pay 4 €, too, but only half a cup is filled!? That should be thought over. Not fair! But that should remain the only negative aspect of the entire concert.

After a lame intro, the headliner’s compatriots DESECRATOR start with punctilious announcements and a brutal sound punctually at 20:00 o’clock. If you have wondered in advance why adding a trash band to a hard rock concert, you will be pleasantly surprised and the fans get immediately into the mood to warm up.
Especially since DESECRATOR are musically first class. Noises, breaks in rhythm patterns, solos, bridges and choruses capture the audience with a lot of fun. The band will definitely be seen together with bands like Kreator, Slayer or Destruction!

Lead singer Riley Strong and his band promote their upcoming album “In The Gallows” on this tour. With his provocative announcements he scores with the audience right from the start and fans celebrate the songs as if they’ve been known for years. Their impressive Thrash version of “Born To Be Wild” by STEPPENWOLF sets the audience on fire. STOP! This is the first support act of the evening! Madness. Great band, great crowd.
The eponymous title track to the new album is great too and the performance impeccable.

Then the band KAISER FRANZ JOSEF, founded in 2010 and opening for AC / DC this year,  has the task to keep the fans happy, which they succeed in impressively. Lead singer Sham convinces with his strong and full voice during the whole performance. He is not a whirlwind and stays on the left side of the stage, but bassist Pete raging up and down the stage and Tom beating his drums wildly keep the audience properly to temperature.
Musically, KAISER FRANZ JOSEF are somewhere between LED ZEPPELIN, DEEP PURPLE turn out a brilliant support act for AIRBOURNE. Just like DESECRATOR.

Also, KFJ have a cover on the setlist, namely “A Whole Lotta Love” by LED ZEPPELIN, great cover version. So there you have an awesome package put together for the Airbourne Tour. Singer Joel confirmed this in a conversation before the show, that they had a very good time with both bands and everything went great. Especially with DESECRATOR, who count them among their friends, they had a lot of fun on the tour. All are very happy with the support.
We too are happy to have seen two outstanding bands.

Just in time at 21:45 the Terminator soundtrack starts and already at this point the fans celebrate the first song loudly with “ohhhhoooohoohooo ….. hohohohooohohoooo” chants.
Ryan O’Keeffe, Joel’s brother, takes his seat, a slight right hand injury sticks out, but that does not stop him from punching the drum furs, and Joel –  traditionally shirtless – plus Justin Street and new signing Harris Harrison enter the stage. 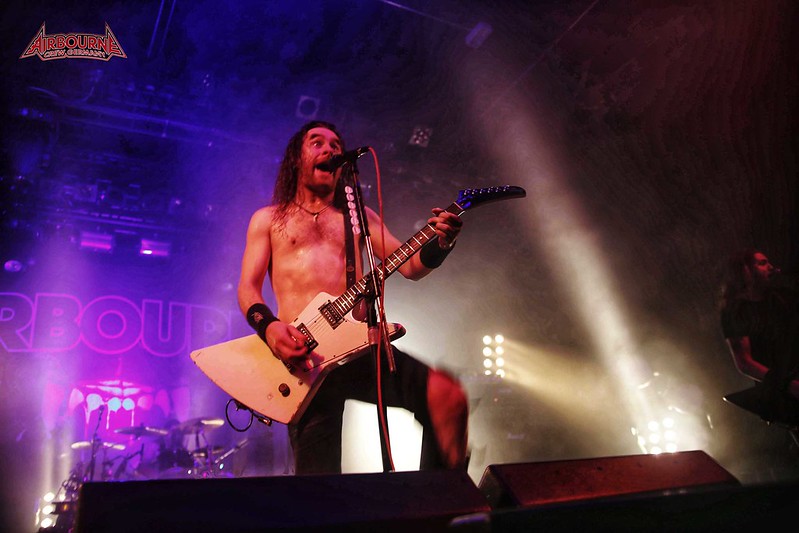 AIRBOURNE start brilliantly with “Ready To Rock” with their performance that convinces all along the line. Followed by “I’m Going To Hell For This” and “Too Much, Too Young, Too Fast”, the fans take it literally and start crowdsurfing, which a grinning singer thanks with thumbs-up. The perfectly functioning security is always ready and neatly leads them off out of the pit. When you then hear the Secu saying “see you soon”, it pleases you all the more. Just great.
The bombastic sound is mixed – like almost all concerts – by Mark S., who received as a thank you a 1 liter FAXE can afterwards, since he also had his birthday on that day. Congratulations.
For the song “Down on You”, Joel gets a new guitar – a really fat Falcon Guitar, reminiscent of Malcolm Young’s 1959 Gretsch White Falcon – and off it goes. So cool. For “Girls In Black” Joel as usual joins the audience for his beer shower with the fans, from the beer can he has just opened with his skull.  “Bottom Of The Well” and “Breakin ‘Outta Hell’ follow and are eagerly absorbed by the audience.
“Live It Up” starts with Ryan operating a siren, and at the end a bar in Motörhead design is rolled on stage, where Joel first pours a drink for the entire band. Nick, the stage manager, had to deliver 2 more bottles, because Joel wants to let the fans participate. So  the security distributes several cups of Cola / Jacky to the audience. Glorious. Then Riley Strong comes on stage and to sing the song with Airbourne and the rest of DESECRATOR’s band stands at the sides in the photo pit celebrating with them. What an evening.

The final “Runnin ‘Wild” has every inch of the hall shaking. This song just has to remain the closer and should stay that way forever. Simply because of Lemmy in the video for this song, who drives the truck in which Airbourne are playing in the back. The band owes him a lot and you will never forget him anyway.

With playing time of almost 90 minutes, this was a perfect concert for everyone present, where every penny spent was worthwhile. AIRBOURNE delivered a great show and will definitely play in front of sold-out houses next time too.