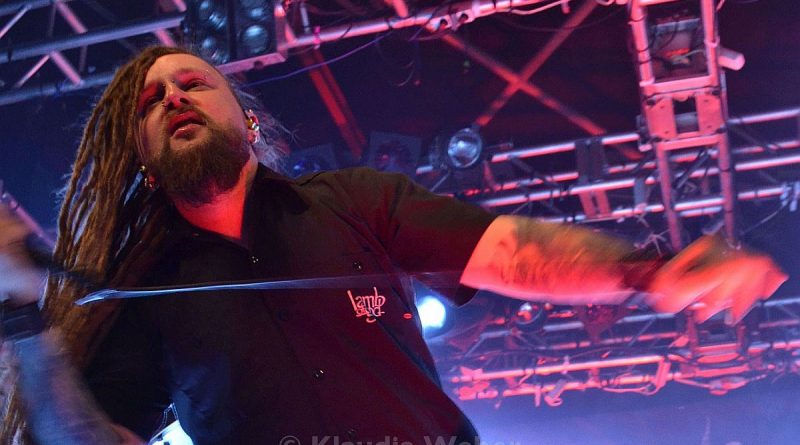 support: Thy Disease, Nox Vorago, Thrashred, May 16, 2017 – Nosturi, Helsinki, Finland
Check out the PHOTO GALLERY (photos: K. Weber)
Thanks to the cooperation between Elektrik Products (who organise e.g. Findustry events) and Enslain Magazine, Polish Death Metal veterans VADER and DECAPITATED could add three gigs in Finland to their ongoing Crushing the North tour. First it did not quite look that great, being scheduled on a Tuesday and then starting unusually early, at 19 h… and when I arrived, the worst expectations seemed fulfilled: The number of media representatives in the photo pit was higher than the amount of people in the hall…

Hence the energetic Old School Thrash show of Russian Thrashred turned out a very exclusive one. Although more and more people showed up during their gig and cheered as loudly as they could, I felt a bit sorry for those youngsters – but they made the best of the situation and hopefully won some new fans.

Nox Vorago proved that it’s worth to check out unknown acts, because you might get positively surprised. And I was, and not the only one. Imagine the offspring of Rowling’s Death Eaters, Tolkien’s Ringwraiths and the Scream villain suddenly entering the stage … (and I am still a bit pissed that I missed the opportunity to capture those Swedes without their masks during their line check…) Their music was even more impressive than the visuals, although not quite fitting to the other bands: a mystic-mysterious Mix of Extreme styles, rather tending to epic Black Metal with a touch of Prog. Very appealing. Much more than Ghost, in my opinion…

Thy Disease were the third Polish act on the bill, who also accompany Vader and Decapitated on the Crushing the North tour. Again, a mixture of several Extreme styles, this time it was more of Industrial and Metalcore incorporated into the Thrash / Death / Gore mix. Honestly not quite my cup of tea, but it seemed the already impressive crowd totally enjoyed it.

It is difficult to believe that in their 20 years of band history, the legendary Decapitated (start photo) have somehow never managed to get to Finland. No wonder the venue was full by now, and the mood as high as the expectations … And what can I say – it was like the band intended tried to take down the whole building – crushing the North indeed! They pulled of this great mix of high precision Death Metal and groove, classic treats like drum solo, or insane guitar soli, and being so brutal but still so likeable… a perfect show, so don’t miss those guys on tour!

Maybe I should mention that a part of the balcony had already been opened – so yes, just the number of people attending a show on a Tuesday illustrates the popularity of the Polish headliners. When Vader entered the stage, they did not really need to pull off much of a show, as the audience was already highly charged. Nevertheless, they persisted … Whatever you might expect from a band with their roots in the 80s, you got it. The clothes, the poses, and it all fit somehow. In their 25 years of band history, Vader have never been this typical Death Metal band, which made them so appealing. High precision, focus, intensity and some Finnish expressions (Perkele) thrown into the excited crowd – the Imperial March in the end summed up the emotional state of the fans who have witnessed a truly epic Death Metal night!