“Sure, no problem to do the merch when the stand is near the stage, because I can follow the show then too”. “Nobody buys merch while a band is playing on stage.” Two people, two theories, to be proven wrong… As the report should measure up to this special occasion, the “official funeral” of 3 (even 4) bands – details HERE – there are also guest comments  …

… but first my own impressions:

The Finlandia-club turned out to be part of the impressive Sibelius hall in Lahti, great location, great venue. Some delays (soundchecks, my train) were the reason I hardly managed to set up the stand, when doors opened already – and then I wished having 6 arms like goddess Kali, or the ability of cloning myself – THE END merchandise was literally snatched from my hands…

RoutaSielu I could basically follow acoustically only… As most fans wanted to absorb every second of this special gig, quite a big enthusiastic audience had already gathered. A good start of the marathon for many of those on stage, playing 2 or even 3 shows, like mastermind Tuomas Saukkonen, in this band on bass and microphone, and Pyry Hanski, here on drums. Also Mikko Heikkilä (git, voc) should be seen again right afterwards. Saku Moilanen (key) and Eero Silvonen (git) completed the band that indeed convinced with their Melo-Death-Folk-Groove and Finnish lyrics. Setlist: Soturi / Sukuhauta / M.E.V. / Enkeli / Kaipaus / Pimeä / Loppu / Ystävä

Black Sun Aeon – where Tuomas and Pyry had switched their instrument duties – I could party enjoy by watching, too. Somehow I got the impression that this massive and brutal sound bulldozer required a bit more time than usual to gain momentum, despite the guest growlers Juuso Turkki (The Hypothesis, Red Moon Architect) and of course Mynni Luukkainen for the last two songs. My highlight were the duets of Janica Lönn and Mikko Heikkilä whose voice simply go together in perfect harmony. Setlist: Funeral Of World /Frozen / River / Solitude / Oblivion / Nightfall / A Song for My Funeral / Brother

As there was hardly anything left for sale any more, I could enjoy the headliner show, fired up by this huge crowd that freaked out when the intro started. Needless to say that this should be one of the best and most intense BTD shows ever, surprises included. The basic line up Pyry – bass, Juho Räihä – git, Rainer Tuomikanto – drums and Tuomas – git&growls was “pimped up” with Panu Willman, clean singer from the early days, for a couple of songs. “I was never there” was the farewell tribute to Dawn Of Solace, another project to be buried this evening. Tuomas addressed the audience only rarely, and in English because of many fans from abroad. Finally also Lars Eikind appeared to enrich the “Deadsong” with his unique voice. At some point Tuomas voice broke… and he was not alone being overwhelmed by emotions … The final “Unbreakable” featured Mynny as guest growler – and surely the audience wanted more… but unfortunately no encores, presumably also due to venue policies. Setlist: Pitch Black Universe / Fear Me / Disappear / Throne Of Ice / My Darkness / Vengeance / My Room / I Was Never There / The Black / Phoenix Rising / Fallen World / Eclipse / Deadsong / Unbreakable

Shedding some tears, all I can say is THANK YOU FOR THE MUSIC, which will always have its place in my heart (and my CD player). And I bet we´ll run into each other in the future!
(Check out for example Tuomas´ new project WOLFHEART
http://www.youtube.com/watch?v=9FFgrbFVyrw )
– Klaudia Weber –

Guest comments:
When I was about to leave Tuska festival area in 2008, some random guy handed me over a black-covered cd. It was the Dirty Black Summer EP with a Black Sun Aeon song called 3rd Chapter. I got interested in it mainly because of the guest vocals by Amorphis´ Tomi Koivusaari, but it turned out to be something I couldn´t have ever expected. It led to memorable adventures… 3-hours drive and sleeping in a car on a parking lot behind some skiing venue (at Dark River Festival in Kotka), long story short. With RoutaSielu it actually happened pretty much the same way – M.E.V. was a total strike to me. I tend to deal with my emotions by listening to music and by that I must say, these two bands have helped me through a lot. So the last gig felt like saying goodbye to my best friends – who have seen my highs and lows in the past couple years. The end of an emotional but too short journey. You have given me so much strength and happiness through your music. Behind all these tears: looking forward to see you on stage again some day, somewhere. Wishing you all the best for your upcoming projects in future. Allright… I´m almost speechless but once more, from the bottom of my broken black heart, two words for you all. Thank you.
– Susanna Nylander –

After a 9h trip we reached the wonderful winterly Lahti and „Finlandia-Klubi“ at about 20:30h.

Right after entering the great location, „Routasielu“ opened the evening. The pit was well-filled with fans who enjoyed those exclusively Finnish songs. A nice 40min introduction to a „historic“ evening.

After a short break „Black Sun Aeon“ appeared; the first riffs of „Frozen“ caused an instant wave of gooseflesh and almost made me cry. What a great atmosphere, what pleasant sinister melodies for the fans´ ears and hearts! Seeing this band again reminded me that this would be the last gig of a unique band. I think many will miss those soulful voices of Mikko und Janica in interplay with the growling of Tuomas and/or Mynni.
During the last break I had the chance to chat with some musicians, but the tone of their voices made clear that – no matter how ingenious the music -it was still a very sad and emotional evening.

When „Before The Dawn“ began the last gig of this evening, the pit was totally full. Right from the start they battered us with those grandiose riffs, Tuomas` vocals had your blood freeze, the audience cheered to their heroes and sang along every line. A worthy final show for the band and the fans. Also here some former band members were invited (Lars, Panu) and involved into the show, the fans thanked with „Standing Ovations“ and screams of joy.

Unfortunately this was not just the end of a great evening with 3 great bands. An era of Tuomas Saukkonen`s bands Dawn of Solace, Routasielu, Black Sun Aeon and Before The Dawn who brought joy to the hearts of fans, was ended here.
I think that every musician who had the pleasure to be part of one of those bands is grateful for working with Tuomas and the chance to develop further. We will encounter many of them again in other bands (Kaunis Kuolematon, Shining, Gloria Morti…) and we will naturally follow the path of Tuomas´ new promising project „Wolfheart“.
It makes me proud that I can rank such greats musicians among my friends.
All in all an exciting, emotional and unforgettable event.
-Thor Twittallica –

(he also contributed this group photo)

The final comment from the mastermind himself:
23.2.2013
Broken man with a broken heart surrounded by people from past and present. People that I have a honor to call friends / bandmates / fans. My love towards you is far more greater than my solitary appearance could ever reveal.
You made this all possible and real. You shared a dream and lived it with me. What would I be without you?
Farewell my brothers in arms. Kings among men, friends remarkable and grand !
Farewell my darkness. You walked beside me for 15 years and left me a pitch-black heart and a coal-black soul and these I will cherish until the end of time.
And the one who made me feel as a whole.
“You always saw me
And for u I was always there”
♥
– Tuomas Saukkonen – 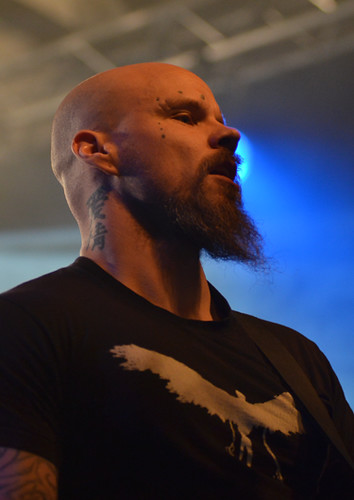