The third album „Tyhjyys“ out the day before, praised by the expert press (also by our colleague); at the same time a new video clip collecting almost 12.000 views within 24h – those were the signs that this Wolfheart release gig could turn into a real party. Moreover, the club was pretty full only after the doors officially opened.

The first act of this evening had something to celebrate too: Magenta Harvest have found a record company and announced a new album to be released this autumn. Yet the line up will change slightly, as bass player Jonas Frilund will go on paternity leave soon. Not too much of a problem, I was told later by singer Mathias Lillmåns, as there are friends to help out (e.g. Finntroll, Chthonian) … Band website
Setlist: Flood of Reckoning, Spawn of Neglect, One Walks Down, The Search for The Higher Water, Limbo in Rime, The Pane of Eden, And Then Came The Dust

The Hypothesis had impressed me with their Origin album and their variation of Melodic Death – and yes, those guys do kick ass live too. It was a premiere for the new drummer Rolf Pilve, who indeed caught the (female) eye *wink*. And a premiere for me as well, because for some reason I had always missed gigs of this band in Helsinki, either by being sick or engaged elsewhere. Something to miss indeed! This time the fans filled all the pit – which meant for me that I better prepare for a hand-to-hand combat scenario when the headliner comes up… Band website

Had secured a spot at the stage way before the gig started, in order to deliver a few impressions. The occasional moshpit added another touch of danger …

Rebus: „Where is Joonas?“

In other words, it was a big success for Wolfheart. With an audience freaking out when the intro starts, and nothing to complain regarding sound or lights (which was already the case before). Therefore you could spot guitarero Mika occasionally with a huge smile on his face. He and speaker-of-the-band Lauri (bass) did not have to address the crowd a lot, people were shouting and clapping along by their own initiative. Basically I had expected more Tyhjyys material to be presented live, yet the set list rather featured a „band history best-of“, closed by the classic Routa pt. 2. But no leaving without encores, and what would a Wolfheart gig be without „The Hunt“… And finally even the mastermind himself Tuomas Saukkonen spoke – just „Kiitos, Helsinki“ (thanks, Helsinki) though. 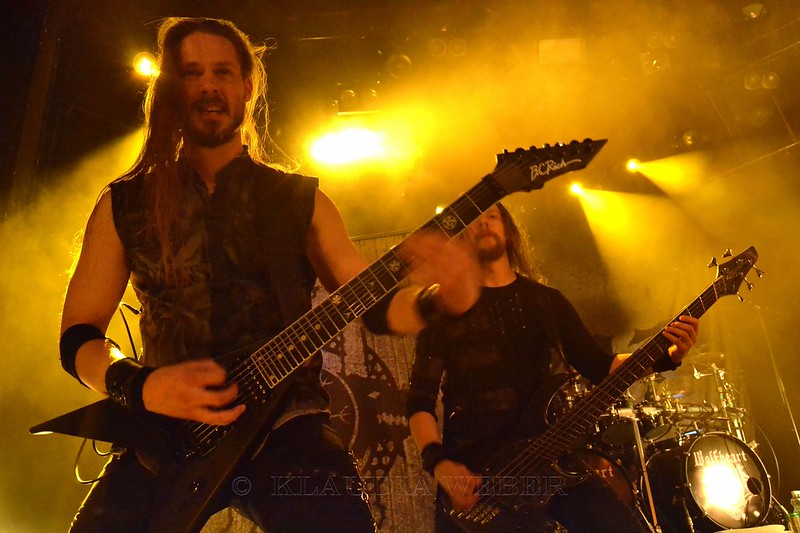