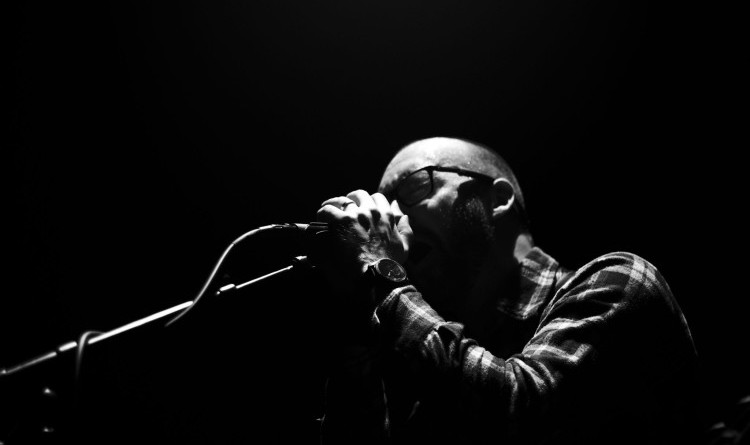 France has been in the press a lot recently, for all the wrong reasons. A much more positive reason to turn your attention towards France is this band from Bordeaux/Biarritz and their wonderful fourth self-released album ”Dull Parade”. Mastermind Vincent tells us more.

Who are you – could you introduce yourself and all of the band members?

Hello there! So I’m Vincent. I play guitar in Appollonia. The magniﬁcent Tony and Michaël respectively play bass and drums and the three of us sing. Tony has just joined the band and hasn’t recorded stuff with us yet. So anything you hear from us up to this day has been recorded with our friend Olivier on bass and vocals.

How did you meet each other, and when and why did you form this band?

Contrary to what our current popularity level might suggest, we’ve been around for quite a while now! Haha! We formed this band in 2005 simply by passion. So it’s been quite a while now and I’m the only original member remaining. Michaël joined the band in 2010 and as I mentioned earlier, Tony joined us last year. Tony and Mike are like best pals and we all knew each other before from playing shows together with their previous bands and just hanging around at mutual friends’ places. That helped… 🙂

I kinda always hate having to answer that question because no one seems to agree on what we do. I think it’s heavy music inherited from metal, indie-rock and hardcore with a lot of clean singing reminiscent of « grunge » bands (well that’s at least what people say). It just developed naturally. We don’t think about that kind of stuff you know because our musical roots are all over the place so we just let things happen. It’s probably a bit cliché but it’s true. 🙂

In which bands have you played before? Do you all still have other side projects?

I’ve never been in any other band before and I don’t have any other side projects! Appollonia is my baby and I can put a bit of everything I like into it. That’s enough for me. Even if the two other fuckers try to prevent me from guitar-soloing too much. Haha! Regarding those two dudes, they play(ed) in so many bands I can’t name them all! But amongst others Michaël plays in two bands I really like, Le A and My Ant  .

Not at all no. The other members don’t write in Appollonia. Fun right? Haha! All jokes aside it just happened as a convenient thing. It was easier for me to bring complete songs and lyrics to the other guys and since they never seemed to mind, we just kept functioning this way. However, if they dislike something or have good ideas about arrangements, song structure or anything, I always listen to them and we change stuff. So yeah, I write everything but the songs wouldn’t sound the same without their inputs. They’d probably sound better right? Haha! 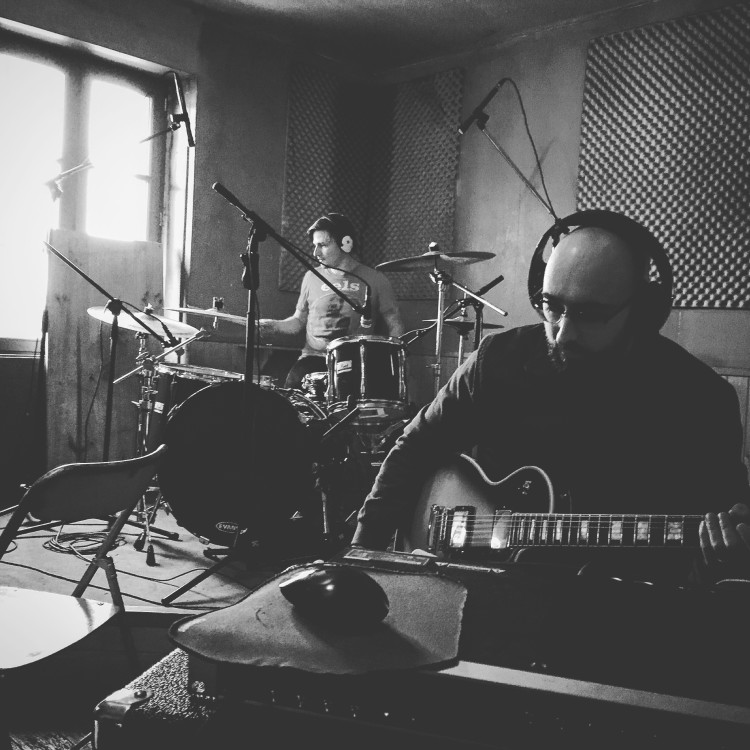 No particular philosophy no. The only thing I want to stay true to is to try to please me before I please anyone else with this band. Aside from that, nope, we just roll with the ﬂow. And when it comes to inspiration, I believe life and 20+ years of daily musicalbrainwashing do the rest.

It was around the time when Chino Moreno from the Deftones was working on his other project, Team Sleep. I was (and still am) such an avid fan of the band that I was checking daily if any song had leaked on the web. And one day, as it sometimes happens, the demos from the whole album leaked! And amongst them was a track named Appollonia. I kinda liked it and submitted it to the other guys who were OK to use it. End of the story. 😀

What is it like in your country to be a Rock / Metal band (playing the particular style you are playing)?

Mmmh… well you know, France is probably one of the least rock/metal-friendly country so there’s nothing much to say about it. It’s kinda hard to ﬁnd gigs and receive some sort of exposure but it’s probably the case in many other countries so there’s no speciﬁc reason to whimper about. What are your goals, dreams, what do you want to achieve with your music? I think like every other band, I’d like as many people as possible to be exposed to our music. It’s probably our fault but I think it’s a shame that so very few people get to have a chance to hear one of our songs. I feel like we play a type of music that could be appealing to a pretty large « metal audience » so it kinda frustrates me that so little people know about us. My dream would of course be to make a living out of this and tour with musical heroes of mine but somehow, that’s pretty unlikely to happen. Which is OK too… 🙂

What are you doing when you are not making music?

Well I lost my job three months ago. I used to run a guitar shop but the place unfortunately closed down so now I’m currently receiving an education in web design and stuff. And in my free time, when I’m not making music, I’m buying records, listening to music and going to shows. There’s not much else I really enjoy doing. Oh yeah, I also enjoy watching movies with my wife. Thrilling right? Haha!

Oh no, we’d love to work with a record company. It’s only because no one offered us a deal that we released « Dull Parade » ourselves. So yeah, we’d love to work with a label to go one stage further but if no one’s interested then we’ll release it ourselves, it’s not a problem. What should an ideal record company for you be like, and do for you? Support is what we need the most. To get more exposure, support is what you need. It takes time, money and connections. Three things we don’t have right now. So this is what an ideal record company would do for us. Help us get press and help us get on the road and open for bigger bands.

Good I hope? Haha! We try to have a nice light show so venues that offer us this possibility are always welcomed. And it’s true that because we’re so used to playing in bars, we really enjoy playing on bigger stages where we can have stage monitors and stuff. So right now, that’s what the perfect venue looks like for us. 🙂 Aside from that we’re always happy to play anywhere.

Do you have a weird/absurd story to tell, e.g. about mishaps at a gig/tour?

Oh yeah! We’ve had our share of fun… electric shocks through microphones on stage, ampliﬁers that blow up after two songs and there’s no backup around, driving six hours to play to 3 people that are getting shot by some douchebag and his slingshot hidden in another building, crossing France to play at 3 AM in a bikers’ bar to realize no one’s expecting you there and your name isn’t even on the bill, oh yeah, ordinary business! Haha!

There are many I’d love to play with but Deftones would be one hell of a trip for me. They always seemed to me like very nice guys on top of being one of the most creative bands from these past couple decades. And I think their audience would have plenty of things to like about us. So yep, Deftones. 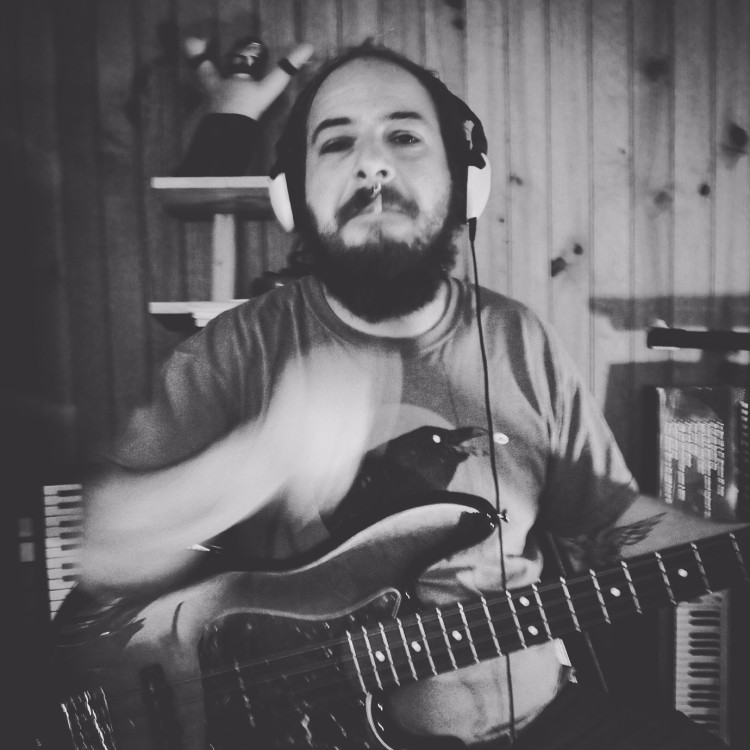 We’re currently demoing songs for a new EP we have in the works and we’re also working on a few gigs for 2016. Keeping busy! 🙂

Thinking of recent events in Paris, isn’t it somehow ironic that it was a metal concert which was targeted (when metal is not quite the most favoured genre in France)?

Well you and I both know Eagles Of Death Metal have nothing to do with « metal ». They’re just a rock’n’roll band. But I’m not sure what those dumb fucks had in mind when they decided to target that speciﬁc show. Was it because they thought it was a metal show and they view metal as a globally anti-religious entity? Was it because they knew it was a sold out rock show and they thought it would send a heavy message to occidental culture? Or could it have been anything else and they picked that show at random? I don’t know… so right now, I can’t really speculate and answer that question.

What are your thoughts and reﬂections about the whole thing?

The whole thing just breaks my heart. I mean… it could have been any of us that share this lifestyle. Guys and girls that enjoy going to games, going to shows. The people that died there that night probably look a lot like us and are probably the least responsible for what’s happening in Syria too. So it felt quite close to us and unfair. It just left me staring at my TV screen, speechless. I’m not scared though. These guys need to be destroyed, no doubt about that. But I’m afraid of confusion in people’s mind and the resurgence of misplaced patriotism encouraged by politics using tragedy to push their own agendas. So yeah, fuck them. And fuck IS too. Let’s try to keep an open heart.

KILLERPILZE : They have сome back!

Halestorm: „We laugh a lot at ourselves”